Developers’ shrinking unbilled sales not quite a concern 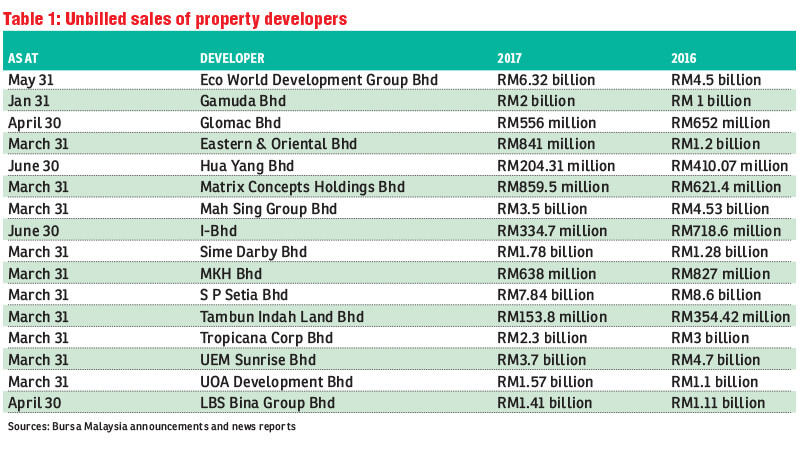 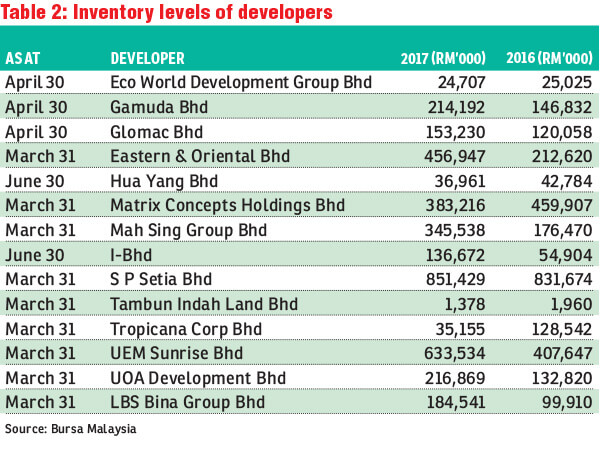 KUALA LUMPUR: The contraction in unbilled sales in the past one year may not pose that much of a concern to property developers’ earnings.

The decline in unbilled sales is quite a surprise, said analysts who track the domestic property sector, as the smaller figures are mainly due to the delay of new launches after the puncture of the property boom in 2015. However, most of them concur that things are unlikely to get worse, instead sales may pick up albeit at a slower pace moving forward.

HLIB Research property analyst Lee Meng Horng said that the declining level of unbilled sales recorded by most developers today are reflective of the softer market conditions in 2015 and 2016.

“Many property developers held back launches in 2015 and 2016, and when they don’t launch they don’t sell, hence the replenishment of unbilled sales was not there.

“For this year most developers have guided on a flat growth in sales, barring a downturn in their forecasts, I don’t think the declining levels of unbilled sales are indications of a deteriorating property market,” he told The Edge Financial Daily.

“As long as unbilled sales visibility remains close to one year in general and also assuming that developers can maintain flattish sales over the next couple of years, it would mean steady earnings trajectory over the next few years.

“For example, looking at the overall sector, if you talk about good days of 2013 to 2014 we saw our universe average unbilled sales visibility peak at 1.5 years, and currently now, based on our average estimates, it is about 1.1 years,” she told The Edge Financial Daily.

The group explained that the lower profitability was because its new launches were at preliminary stages of construction, and had yet to contribute significantly.

In its review on the company dated July 14, Kenanga Research noted that Hua Yang’s unbilled sales of RM204 million would only last for another one to two quarters.

“We opine that Hua Yang should be more aggressive in driving its sales from its launched projects, which have received slow response from the market,” said Kenanga Research.

Year to date, Hua Yang’s share price fell by 24% to 86 sen last Friday. Kenanga Research had an “underperform” call on Hua Yang, with a target price (TP) of 95 sen. The research outfit noted that it does not rule out the potential of a cash call if Hua Yang acquires the remaining 70% stake in Magna Prima Bhd in the future.

Lim said that some bigger property players, such as S P Setia Bhd that have overseas contributions, may have distorted unbilled sales visibility due to timing of contributions from their overseas developments as sales are only recognised on a completion basis, rather than progressive billings as done so here.

For S P Setia, which is in the midst of taking over its sister company I&P Group Sdn Bhd from its controlling shareholder Permodalan Nasional Bhd for RM3.65 billion cash, its unbilled sales stood at RM7.84 billion as at March 31, from RM8.6 billion a year ago.

In a June 23 note, HLIB Research said it remained positive about the proposed acquisition of I&P Group given the attractive acquisition price which is revised net asset value-accretive. The firm had a “buy” call on S P Setia with a TP of RM4.

Axis REIT Managers Bhd head of investments and Malaysian Institute of Estate Agents immediate past president Siva Shanker said that though it is too soon to say whether there will be a residential property market upturn this year from the “nightmare years” of 2015 and 2016, the situation has definitely improved compared with previous years.

“I am constantly talking to estate agents and property players out there every single day and the feedback I get from them is they are busier now than they were last year.

“Although much of that busyness hasn’t translated into sales, usually the market starts buzzing before the sales come in. I think 2017 would be a flattish year in terms of property sales, while 2018 and 2019 should improve barring any unforeseen circumstances,” he said.

National Property Information Centre data from 2001 to 2016 indicated that 2012 had the highest number of residential property transactions during the 16-year period at 272,669 units worth RM67.76 billion.

In terms of value of transactions recorded, 2014 was the highest with 247,251 units worth RM82.06 billion transacted.

While unbilled sales are shrinking, many developers are seeing rising inventories on their balance sheets — an indication of unsold units piling up.

As the inventories are properties and not machinery, taking them off the balance sheet is not as simple as a write-off — they would need to be sold.

Rising number of unsold units raises concern about whether this would affect their cash flow.

One bank-backed analyst opined that it does have cash flow implications, but pointed out that developers would be able to find ways to sell the inventories.

“I don’t think it’s a main point of worry at this juncture; usually there are ways for developers to take the inventories off the balance sheet, for example there could be related party sales transactions in the form of sales of the unsold units to directors,” he said.

Developers have long put the blame on tougher lending requirements from banks that have led to the slowdown in the property market, with calls to review housing loan criteria for potential buyers of affordable houses.

However, in a July 18 statement, Bank Negara Malaysia highlighted that the hindrance to home ownership was the affordability of homes, an issue which had yet to show significant improvement.

The central bank noted that the average national house prices remained at 4.4 times of the median income — the affordable range is 3.0 and below — with lower affordability recorded for some major states and urban cities.

It pointed out that RM40 billion of housing loans had been approved in the first five months of 2017 to more than 152,000 borrowers, and that three quarters of them were first-time house buyers. The approval rate for housing loans has also been stable at 74%, it said.

An analyst with a local investment bank said the core issue of housing loans isn’t approvals, instead it’s the margin of financing.

“I think the issue is more on getting the right margin of financing, for example a person who applies for a housing loan expects to get a loan that covers 90% of the house price, but the bank grants 85% and the person ends up forking out the remaining 5%, which for many people nowadays it is tough to do that and may delay them from going through with buying the house,” he said.