Plantation sector
Maintain “neutral”. Several northern states in Peninsular Malaysia are currently experiencing one of the most severe annual floods in 30 years. This will negatively impact the harvesting, transportation and processing of palm oil from these areas. As a result, crude palm oil (CPO) output for December 2014 may post a larger month-on-month (m-o-m) decline.

It is too early to assess the exact impact of the flooding on CPO output as this will be dependent on the severity and length of the ongoing monsoon. Among the planters under our coverage, Felda Global Ventures Holdings Bhd (FGV) has the highest estates exposure in the Malaysian states impacted by floods so far. We maintain our “neutral” rating on the sector and our preferred picks continue to be First Resources Ltd, PT Astra Agro Lestari and PT Salim Ivomas Pratama.

Negeri Sembilan became the eighth Malaysian state to be affected by this year’s second wave of floods that have ravaged the country over the past 11 days. More than 300 people in the state have been hit by the floods. The situation in flood-hit Kelantan, Terengganu, Pahang, Johor and Perak has reportedly worsened, while the situation in Perlis and Kedah has improved slightly.

The Malaysian Meteorological Department predicts that the monsoon will last into the middle of January. This is negative for Malaysian planters with estates exposure in the states that are affected by one of the worst annual floods here. The floods are expected to reduce palm oil output from these states, as harvesting, milling and transportation activities at the palm oil estates and related processing facilities located in affected areas will be disrupted.

Planters with the highest estates exposure to the states impacted by the floods are FGV, followed by Sime Darby Bhd, IOI Corp Bhd and Kuala Lumpur Kepong Bhd. However, we feel it is too early to assess the exact impact of the flooding on palm oil output as we are unable to predict the severity and length of the ongoing monsoon. — CIMB Research, Dec 29 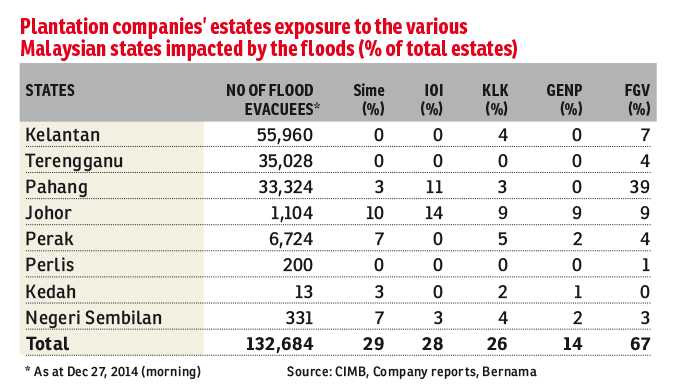