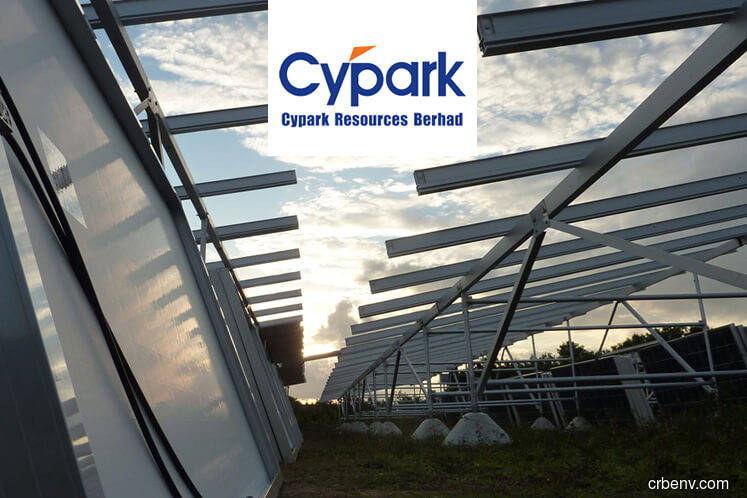 Cypark Resources Bhd
(April 1, RM1.68)
Maintain add with an unchanged target price (TP) of RM1.83. Cypark’s first quarter for the financial year ended Oct 31, 2019 (1QFY19) core net profit was in line, at 16% of our and Bloomberg consensus full-year forecasts as the first quarter (1Q) is seasonally its weakest quarter. The company’s 1QFY19 core net profit increased 6% year-on-year (y-o-y), supported by higher revenue (+5% y-o-y), particularly from its environmental engineering (EE) (+4% y-o-y) division due to new projects secured, as well as its landscaping and infrastructure (+28% y-o-y) division due to increase in work activities for preliminary and site preparation works from new projects secured.

Quarterly pre-tax profit improved 9% y-o-y, largely underpinned by better profitability from EE (+8% y-o-y), and the landscaping and infrastructure (+44% y-o-y) segments due to increased work activities. Green technology and renewable energy (RE) division’s profit before tax (PBT) was slightly higher by 3% y-o-y despite flat revenue, due to savings achieved in finance costs. Quarter-on-quarter (q-o-q), revenue was up 11% but PBT declined 28% due to more set-up costs incurred for the early implementation stage of the projects.

As of financial year 2018 (FY18), Cypark’s total renewable energy (RE) capacity stood at about 31mw. Its two new solar plants under the first round large-scale solar photovoltaic (LSS 1) with a combined capacity of 11mw (Jelebu 3mw and Ladang Tanah Merah 8mw), have an initial operation date (IOD) of end-April 2019. We estimate both plants could contribute an additional RM8 million revenue per annum.

Cypark’s 20mw waste to energy (WTE) plant was 98% completed as of end-February 2019. It plans to test run the plant in April and expects it to achieve commercial operation date in June. We expect the WTE plant to generate stable revenues of about RM80 million per year over its 25-year concession. Completion of the plant will be a key milestone for Cypark as it is the single-largest investment undertaken by company, and its completion would likely catalyse the stock.

We remain positive on Cypark given: (i) we expect forecasted 2019 to 2021 financial years (FY19-21F) earnings to be stronger due to the commissioning of the LSS 1 and WTE plants in FY19F and LSS 2 plant in FY21F, and (ii) the upcoming LSS 3 tender and initiatives for the renewable energy industry are positive for renewable power players, especially Cypark. Our sum-of-parts-based target price is unchanged at RM1.83. — CGSCIMB Research, March 29