Cryptocurrency a tax headache for regulators 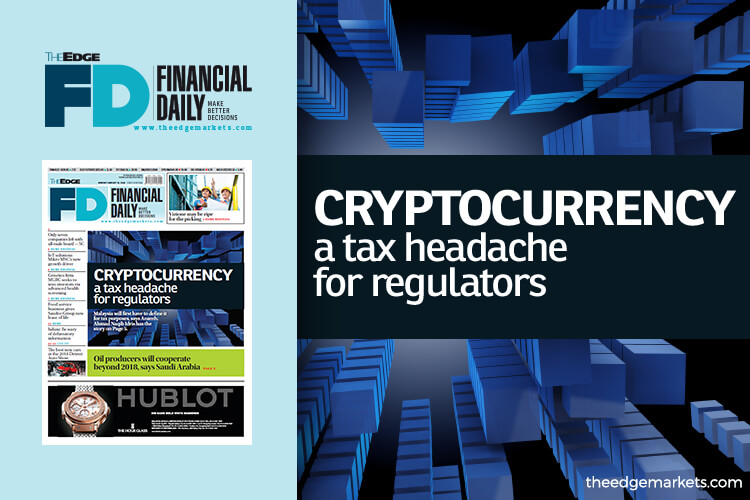 KUALA LUMPUR: As interest in cryptocurrencies such as bitcoin, ethereum and ripple continues to grow in Malaysia amid Bank Negara Malaysia’s (BNM) stance not to enforce a blanket ban on these digital currencies, it is only a matter of time before the government considers taxing transactions and trading gains made on these assets.

The price of bitcoin spiked to an all-time high of nearly US$20,000 (RM78,800) in December last year amid growing interest in the cryptocurrency before seeing a correction to trade at around US$11,500 last Friday.

So far, countries like the US, Singapore and Australia have tax treatments in place for individuals and businesses that accept cryptocurrencies as payments for goods and services, as well as those that trade these digital assets.

These include the recently suspended Proton dealership in Seri Kembangan, Selangor, which went viral on social media after it announced that it would be accepting bitcoin and ethereum as a form of payment for car purchases, to the chagrin of national carmaker Proton Holdings Bhd.

However, before any tax treatment can be imposed, senior lawyer and tax barrister Dave Ananth — who also advises global information services group Wolters Kluwer on Malaysia’s goods and services tax (GST) — said the government will first have to define “cryptocurrency” for tax purposes in the country.

He points out that there is currently no specific provision for digital currency in the Income Tax Act 1967 and the GST Act 2014.

“As BNM has taken the stand that cryptocurrencies are not legal tender in Malaysia — a status shared by other foreign fiat currencies — the tax and customs authorities must decide on the tax and GST treatment respectively,” he told The Edge Financial Daily.

“The government needs to consider if it wishes to give the meaning of currency to these virtual currencies or treat them as an asset. Either way, this will have income tax and GST repercussions,” added Ananth.

Take the US for example. Its Internal Revenue Service generally treats cryptocurrencies as property — similar to bonds — for tax purposes and therefore are subject to capital gains tax.

The Australian government has recently amended its GST Act 1999 and GST Regulations 1999 to introduce the value-added tax treatment of digital currencies.

Meanwhile, the Inland Revenue Authority of Singapore recognises cryptocurrencies as a service. So, businesses that accept virtual currencies as payment should record the sale based on the open market value of the goods or services in Singapore dollars and is subject to GST.

Businesses that trade and mine cryptocurrencies are also subject to tax, based on the profits derived.

For Malaysia, Ananth said the income generated by cryptocurrency exchangers such as Luno and Coinhako should be subject to income tax where appropriate.

The Inland Revenue Board (IRB) has started mobilising itself in the cryptocurrency scene, imposing a freeze on Luno’s Malaysian bank account pending an investigation relating to tax matters recently.

The tax authority has requested for information on all of Luno’s customers, including identification, deposits, withdrawals and transactions, but the exchange said it is working closely with the IRB to limit the parameters of the request to protect the privacy of its users.

Thannees Tax Consulting Services managing director Thanneermalai Somasundaram said the IRB is in the midst of gathering data and knowledge to understand how the cryptocurrency ecosystem operates.

“At the moment, the IRB is trying to understand how cryptocurrency works and it wants to find out which parties are involved in it and how they should be taxed. The IRB can only tax [cryptocurrency exchanges] if it knows where the profits are being made,” he said.

Pointing to the value chain of bitcoin, for example, Thanneermalai said the first party or the “manufacturer” of the virtual currency is the miner, who solves the mining algorithms and gets paid in bitcoin, thus releasing the new supply into the network.

“There are the algorithms, the miners solve them and they get paid for them. It is a business. If they can reinvest in new machinery and employ professionals to run the operations, they are definitely making profits,” he said.

Besides the miners, Thanneermalai said another group that should be taxed is the dealers and traders. If it is regularly traded like a commodity, then the profits would be subject to income tax, he added.

“But how do we tax them? This industry is generally unregulated and I don’t think these mining operations are registered for tax or GST purposes as they are just buying these machines and mining and receiving bitcoin in their wallets.

“Individuals don’t really disclose their holdings either. Nobody can easily tell how much cryptocurrency you have in your digital wallet. It is hard to trace because it is outside of the existing system,” Thanneermalai said.

Either way, it is unlikely that individuals in Malaysia would be taxed for holding cryptocurrencies and using them as payment for goods and services due to the difficulty in tracking the users.

There is no capital gains tax in Malaysia either, except for gains made on disposal of property, and therefore it is unlikely that cryptocurrency holders would be taxed on their long-term gains such as in the US.

Thanneermalai pointed out that as far as tax treatments around the world go, there has yet to be any specific tax on the usage of cryptocurrencies by any government.

Therefore, most governments, if not all, impose taxes such as GST on the sales value of goods and services rendered, and income tax and capital gains tax for those that make a profit from trading or long-term holding.

“If it is used as a form of payment, the GST treatment is on the sale of the goods and that’s all it is. The transaction value is subject to GST and the profits that traders make get taxed under income tax, which will likely be the same case for Malaysia,” Thanneermalai said.

“Either way, we need to know how cryptocurrency is defined in Malaysia for tax purposes first,” he added.