CPO prices set to rise through 2021 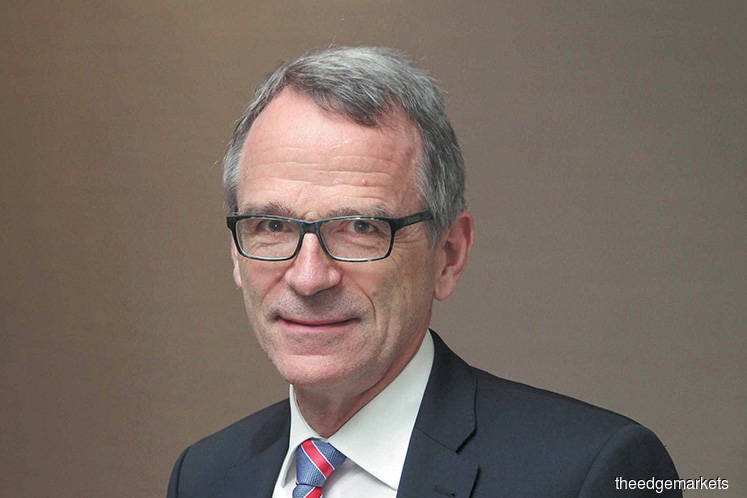 Mielke: ‘We have seen the lows, the question is how far are we going up.’ Photo by Kenny Yap

SANDAKAN: The price of crude palm oil (CPO) is expected to rise from current levels to average higher by the end of this year through 2021, partly driven by the enforcement of higher biodiesel mandates in Malaysia and Indonesia.

“We have seen the lows; the question is how far are we going up,” said leading vegetable oil analyst, Oil World’s Thomas Mielke, when met at IJM Plantations Bhd’s Palm Oil Outlook Seminar 2019/2020 over the weekend.

He added that the higher expected prices for CPO will give palm oil producers more time to resolve ongoing issues in the industry, such as labour shortage.

As it is, the industry is now caught in a “perfect storm”, according to IJM Plantations managing director and chief executive officer Joseph Tek, buffeted by many factors beyond the control of producers, such as the recent minimum wage increase and the European Union’s (EU) regulated act to phase out the use of the oil in biofuels.

CGS-CIMB head of research agribusiness regional head Ivy Ng, meanwhile, is also of the view that CPO prices are set to rise in the immediate term.

The biodiesel mandates implemented in Indonesia and Malaysia, she said, are expected to be able to mitigate the impact of the EU’s Delegated Act on Biofuels, which came into force in June and curbs palm oil use in biofuels, Ng said.

Under the regulation, palm oil use for biofuels in the EU will be capped at 2019 levels until 2023, after which it will be phased out by 2030. Some 2.45 million tonnes of palm oil-based biodiesel may be impacted by the ruling, or 33% of the EU's annual palm oil imports.

Besides biodiesel mandates, Chinese and Indian demand for palm oil is also expected to rise due to competitive CPO prices against substitute oils, said Ng.

China, she pointed out, has already seen an increase in the amount of palm oil it consumes on account of the ongoing US-China trade war, as it consumes less soybeans imported from the US.

On the supply side, she said government policies to raise replanting activities in Indonesia and Malaysia are expected to trim supply, contributing to higher CPO prices. Weather issues, like a dry spell in Sabah, could also result in lower fertilisation application and lower yields, said Ng. Similar weather problems could also affect substitute crops in India and the US, she added.

Mielke, meanwhile, noted that palm oil is currently trading at a discount to soy oil, and that the market already expects the EU to be consuming less CPO.

Notwithstanding that, global demand for CPO, he said, will increase by at least seven million tonnes in 2019, with the global market requiring 77 million tonnes of palm oil this year.

Total supply growth, meanwhile, is expected to moderate to between two and 2.5 million tonnes next year, he said. This means there is a potential gap in supply and demand.

Mielke went on to urge palm oil players to do “more homework” to raise yields, as he pointed to how Malaysia’s annual palm oil yields (tonnes per hectare) have gone down, while sunflower oil yields have increased 53% over the past 15 years. At the same time, rapeseed oil yields have risen 26%, while soybean oil yields have climbed 18%.

By the year 2030, he added, more palm oil wil be needed to process food instead of biofuels, for the ever growing global population that is set to reach nine billion people by 2050.

She urged stakeholders in the agricultural industry — including palm oil — to work together. “We need to work together, because there is a lot more that can be done in terms of agricultural sustainability. We (the EU) are not the enemy, we are a partner,” Fernandez said during her speech at the seminar.

She added that Malaysia's ties with the bloc is not just about palm oil, and highlighted that the EU is Malaysia's second largest trade investor.

When asked what the EU would do when Malaysia and Indonesia submit a complaint to the World Trade Organization, she said the EU aims to resolve the issue in an amicable manner before then.