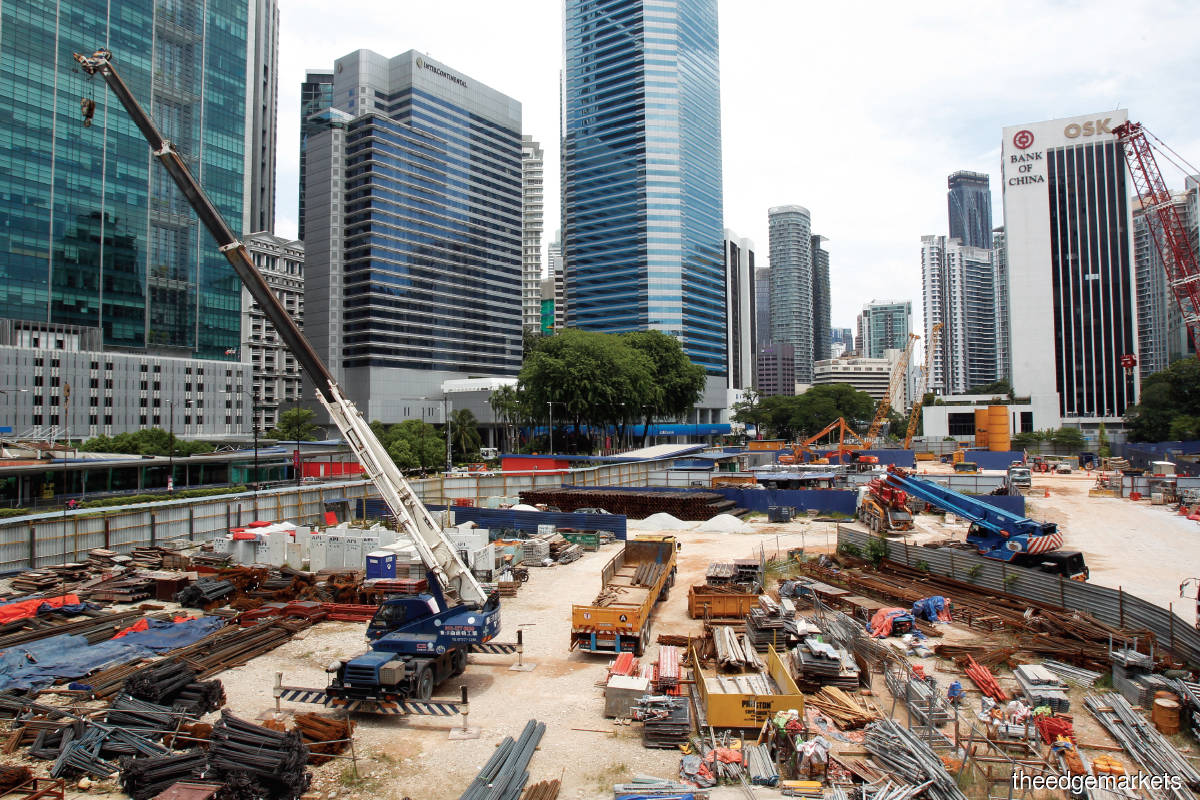 KLCC, Ampang Park, KLCC East, Conlay and TRX have a number of ongoing and upcoming projects that will benefit from the Putrajaya Line. (Photo by Mohd Izwan Mohd Nazam/The Edge)

Kuala Lumpur City Centre (KLCC) and its immediate surrounding areas — buzzing with activity and heavy traffic — are home to numerous commercial centres, businesses and prime residential developments. These areas will get an added boost with the enhanced connectivity from the upcoming Putrajaya Line, the second line of the Klang Valley mass rapid transit (MRT) project.

Previously known as the Sungai Buloh-Serdang­-Putrajaya Line, the Putrajaya Line is set to enhance the property values in the areas and developments near it, say property consultants.

Phase 1 of the MRT line is due to be completed in July 2021 and Phase 2, in 2023. The MRT line will serve as a corridor for about two million people between Kwasa Damansara and Putrajaya, with 35 operational stations (of which 11 are interchange stations) and an overall alignment of 52.2km.

In Part 3 of our Special MRT2 coverage, City & Country zooms in on the areas of KLCC, Ampang Park, KLCC East, Conlay and Tun Razak Exchange (TRX).

Savills Malaysia director of research and consultancy Amy Wong opines that the Putrajaya Line will boost the level of activity in KLCC, Ampang Park, KLCC East, Conlay and TRX. KLCC, anchored by the Petronas Twin Towers, houses the offices of some of the largest companies in the country. (Photo by Mohd Izwan Mohd Nazam/The Edge)

“The connectivity [in the five areas] will improve with MRT Line 2, which connects TRX (integrated with MRT Line 1), the Jalan Conlay area (which will have several exits), Persiaran KLCC and Ampang Park. These areas are currently not pedestrian-friendly. However, walkability will improve upon completion of the MRT Line 2,” she says.

“The KLCC area is currently served by the LRT Putra Line along Jalan Ampang while MRT Line 1 serves the Bukit Bintang area, TRX and the Cochrane/Maluri area. With the improved walkability, it is expected that higher footfall will bring traffic to the commercial developments in these areas.”

In addition, the level of liveability will be improved in these areas. “The areas will be more liveable (with the integration of commercial, residential, public rail connectivity, amenities and facilities). Take the Jalan Conlay area, which is predominantly residential but surrounded by commercial precincts such as KLCC and Bukit Bintang. Once the connectivity by rail and walkways is ready in this location, it should attract more homebuyers and investors,” says Wong.

LaurelCap Sdn Bhd executive director Stanley Toh concurs that the areas will become more attractive because of the Putrajaya Line. “Having the convenience of an MRT station close by gives a premium to the developments because in the long run, occupants are able to save time and money,” he says. The old Ampang Park mall (pictured) was demolished in 2018 to make way for the new station. (Photo by Mohd Shahrin Yahya/The Edege)

“From the perspective of owners of land near an MRT station, their land value will have a premium because the local council will give additional plot ratio and a reduction of car park bay requirements if their land falls under the category of transit-oriented­ development (TOD), that is, within 500m of an MRT or LRT station.”

Meanwhile, Metro REC Sdn Bhd head of agency Terence Yap opines that property values in the areas will go up even more if plans for the high-speed rail (HSR) are realised. “Businesses in the KLCC, Ampang Park, KLCC East, Conlay and TRX areas will benefit from the new Putrajaya Line. We anticipate higher human traffic and potential spending in these areas,” he says.

“Also, employment opportunities in retail and offices will improve tremendously for potential candidates living along Line 2 [from areas as far as Putrajaya Sentral or Damansara Damai with the direct connection]. These areas will definitely get a lift as the economic and financial centre of the country if the proposed HSR project between Malaysia and Singapore is revived and carried out, as the strategic Bandar Malaysia main rail transport hub is the meeting point of MRT Line 2 and the HSR.”

KLCC, Ampang Park, KLCC East, Conlay and TRX each have different characteristics. KLCC is in the centre of KL, anchored by the Petronas Twin Towers and houses the offices of some of the largest companies in the country.

“Ampang Park station is strategically located at the corner of Jalan Ampang and Jalan Tun Razak, directly opposite the Intermark, Menara Binjai and Intercontinental Hotel. It used to be an iconic building and was supposedly the first shopping complex in Malaysia, developed by Low Keng Huat Brothers Realty Sdn Bhd in 1973,” says LaurelCap’s Toh.

Ampang Park was demolished in late 2018 to make way for the new station.

“The KLCC East station is in Jalan Binjai, directly opposite Desa Kuda Lari and Troika and adjacent to the entrance of the Suria KLCC Shopping Centre underground car park. Meanwhile, the Conlay station is located underground at the site of Kompleks Kraftangan in Jalan Conlay. This station is in the vicinity of the Golden Triangle and within walking distance of many landmark shopping centres, al-fresco cafés, swanky bars and hotels, as well as hawker-type eateries. This area is popular with tourists and locals, especially young people,” Toh says.

“TRX [formerly Kuala Lumpur International Financial District or KLIFD] is a proposed joint property development by 1Malaysia Development Bhd (1MDB) and Mubadala Development Co, comprising office towers for finance and banking, residences and retail spaces on a 34.4ha tract near Bulatan Pandan and Jalan Tun Razak. Ownership of the land, known as Dataran Perdana, has been reportedly transferred from the Malaysian government to 1MDB.”

KLCC, Ampang Park, KLCC East, Conlay and TRX have a number of ongoing and upcoming projects that will benefit from the Putrajaya Line, according to the consultants. “In Ampang Park, there is Embassy Garden by Agile Property, comprising 1,296 freehold units of serviced apartments, and Pavilion Embassy by Pavilion Group, comprising five towers (of which three are corporate suites and two are residential),” says Toh.

“In KLCC East, there is the upcoming Cititower by Qatari Diar Real Estate Investment Co. The freehold project comprises a nine-storey retail podium, a 59-storey hotel, an 80-storey office tower and a linkway with Suria KLCC.”

The property values of developments in KLCC, Ampang Park, KLCC East, Conlay and TRX have been steady in the last few years, despite the economic downturn and disruptions. “The ratio of foreign to local buyers for newly launched projects in the KLCC area is roughly 70:30,” says Savills’ Wong.

According to Toh, the homebuyers and investors targeted in KLCC, Ampang Park, KLCC East, Conlay and TRX are those from the upper and upper-middle class as well as foreigners. “The properties [in these areas] are notably expensive. The majority of buyers would be investors,” he says.

The demand for non-landed residential or commercial developments in these areas is higher than that for landed residential projects. “There are hardly any landed properties in those areas. The vast majority of properties are high-rise, non-landed ones. At the moment, demand is still pretty much stagnant and the vast majority of purchasers are either foreigners or local investors (compared with ­owner-occupiers),” notes Toh.

For non-landed residential developments in KLCC, Ampang Park, KLCC East, Conlay and TRX, the ­average rent ranges from RM2.50 to RM4.50 psf per month, he says, adding that the yield ranges from 4.5% to 5.5% per annum.

In terms of price, the average price psf for non-landed properties in KLCC, Ampang Park, KLCC East, Conlay and TRX may vary. “The new projects under construction or just launched — such as 8 Conlay, E&O Residence, TRX Residence, Core Residence and Embassy Garden — range from RM1,700 to RM3,000 psf. Those that have been completed in the last 10 years — such as Troika, Suria Stonor, Ampersand, Trillion, The Pearl and Horizon Residence — range from RM700 to RM1,300 psf,” says Toh.

While property values in KLCC, Ampang Park, KLCC East, Conlay and TRX have been consistent, there are still a few challenges. “Most of the land use in these areas — such as the Embassy Row area in Ampang Hilir, U-Thant and Imbi, Bukit Bintang — has been converted to non-landed due to the high plot ratio given by the local authority. Major developers are building up their land bank in these areas,” says Metro REC’s Yap.

He maintains that there is a significant disparity in the pricing of developments there. “There is a huge mismatch in pricing between new and existing supply. New launches can go for RM1,500 to RM2,000 psf on average, whereas existing supply can go for as low as RM600 psf despite being located less than 100m away,” he notes.

“The average price for existing developments hovers around RM800 to RM900 psf, generating a yield of 3% to 3.5%. Rent has also been on a downtrend, especially during this pandemic. Some tenants were asked to leave the country and landlords are more flexible on rent.”

Savill’s Wong says, “The residential property market in the [KLCC, Ampang Park, KLCC East, Conlay and TRX] areas is highly dependent on foreigners and inbound tourists. The lack of local home occupiers in the KLCC area is due to high property prices. The extensive rail connectivity will offer more options to homebuyers.”

KLCC, Ampang Park, KLCC East, Conlay and TRX are also notable for their residential oversupply. “The oversupply of residential properties and low occupancy in the surrounding developments are due to the global economic crisis,” says Yap.

The demand for high-rise residential and commercial projects in KLCC, Ampang Park, KLCC East, Conlay and TRX has also dwindled. “Due to the ­Covid-19 pandemic, the demand for residential properties has taken a hit. In terms of the commercial segment in these areas, there is a huge supply of office space given the new norm of working from home and a massive reduction in demand for office space. The new norm of online shopping has also led to retailers struggling to keep afloat,” Yap says.

Apart from that, traffic congestion and noise pollution are concerns as well, says Toh.

Despite the challenges and disruptions, property demand and values in KLCC, Ampang Park, KLCC East, Conlay and TRX are expected to remain solid with the addition of the Putrajaya Line.

“We are optimistic that prices will remain stable and demand for properties will increase in these five areas after the completion of the MRT line and post-economic recovery. We need to create value for investors to put their money in. We foresee that the properties in these areas will be safe, sustainable, innovative and connected,” says Yap.

“The immediate future remains uncertain due to the global pandemic. A second wave of infections may be on the horizon and this will disrupt the economy and property market. But in the long term, the outlook [for these areas] is promising, as people will find the MRT and LRT convenient,” says Toh.

“Millennials will form the majority of our population — and they are more likely to use public transport. In addition, land available for development is scarce along those stations. As a result, property values in those areas will increase.”

He advises investors and homebuyers to take the opportunity to seek out good deals. “The current overall sentiment is weak due to the pandemic. It is a good [time] to look for projects that are within walking distance of the stations [along the Putrajaya Line],” he says.