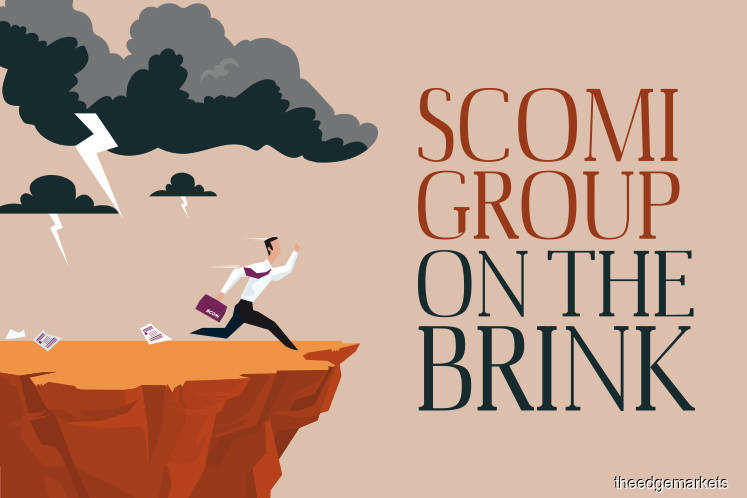 SCOMI Group Bhd (SGB) could be classified as PN17 — a category for companies in financial distress — if its fortunes do not improve soon.

It has been 10 quarters since SGB posted a profit and it looks like its current financial year ending March 31 will be loss-making as well. In its six months ended Sept 30, 2018, the company suffered a net loss of RM53.53 million on revenue of RM287.67 million. As at Sept 30, it had short-term deposits and cash and bank balances of RM95.92 million, and short and long-term liabilities of RM544.3 million and RM153.13 million. It had also accumulated losses of RM276.13 million.

Last Thursday, the stock closed at 4.5 sen, giving the company a market capitalisation of RM49.23 million.

According to a source, the last time he checked, SEB had about RM1 billion in claims. In fact, as at Sept 30, 2018, SGB had receivables, deposits and prepayments of RM986.07 million, believed largely to belong to SEB. In its annual report for FY2017, SEB says it had an order book of RM1.9 billion and that it had bid for RM3.3 billion worth of jobs.

While its order book is indeed huge, there have been many problems.

SEB, Scomi Rail Bhd and Scomi Transit Projects Brazil (Sao Paulo) Sdn Bhd have applied for a judicial management order, whereby the leave of the court will be required to enforce any charge on or security over the property of the affected companies and to commence or continue any legal proceedings against the affected companies.

Strangely, SGB says “none of the affected companies is a major subsidiary”.

“There are so many issues as to why the group is crumbling. One, there hasn’t been a recapitalisation as far as I can remember. If you look at the currency exchange, SGB and its units made huge losses,” says another source with inside knowledge of the group.

Private placement that did not happen

In early June last year, SGB sought to do a private placement of up to 10% of its issued share capital, and at end-November, it applied for an extension of time to undertake the exercise. It now has until June 14 to complete the placement.

Market talk at the time had it that certain Hong Kong and Chinese parties were interested in taking up a strategic stake in SGB. The appointment of Sammy Tse Kwok Fai to take over the company’s reins at end-July last year, replacing long-standing chieftain Shah Hakim @ Shahzanim Zain, was seen as a precursor to the entry of a new shareholder from China or Hong Kong.

Shah Hakim and his partner Tan Sri Kamaluddin Abdullah — former prime minister Tun Abdullah Ahmad Badawi’s son — jointly and equally own Kaspadu Sdn Bhd, which has a 7.82% stake in SGB and is its second largest shareholder.

Interestingly, market talk had it that Tse’s appointment was prompted by IJM Corp Bhd — SGB’s largest shareholder with a 21.39% stake — but when asked about it, IJM CEO Datuk Soam Heng Choon indicated that the appointment had come from SGB’s board.

Excluding Tse, the board had five members, two of whom — Lee Chun Fai and Cyrus Eruch Daruwalla — were IJM representatives. However, in October last year, Daruwalla, who is also IJM’s chief financial officer, stepped down from the board.

Is Tse linked to IJM?

As early as March 2017, Soam had indicated that the construction group was looking to exit SGB. So, why would IJM plant Tse in the group to attract a new shareholder?

IJM’s market capitalisation, at its closing price of RM1.87 last Thursday, was RM6.78 billion — perhaps big enough to not have to worry about a RM149.31 million investment made seven years ago?

Meanwhile, SGB’s plan for a private placement seems out of the question now. When it was mooted in June last year, the stock was trading at an average of 11.6 sen. Market talk was that the placement was targeted at just above 20 sen.

However, when Shah Hakim resigned from his CEO’s post in early August last year, the stock crumbled.

The application for judicial management by SEB, Scomi Rail and Scomi Transit Projects Brazil (Sao Paulo) in early December, followed by the termination of SGB and its Indian partner Larsen & Toubro’s contract for the operation and maintenance of Mumbai Monorail, seems to have sealed the company’s fate.

A placement of 10% of SGB’s 960.2 million share base at its current price would only raise RM4.3 million, which means a much larger placement would be required.

Placing out 10% at above 20 sen seems unlikely as it would be just too expensive and make more sense for any potential investor to buy on the open market. Also, a placement of such a large block of shares at such a low price may not please existing shareholders who would face a dilution of their holdings. “The existing shareholders may prefer a rights issue as the dilution may be too much for them to stomach,” says a source familiar with SGB.

It is also puzzling why SGB and SEB have never announced the problems they face in Mumbai, India; only those who follow Indian news would know of the turmoil SEB faces in the subcontinent.

SEB’s annual report talks of the difficulty in transporting trains to Brazil but nothing more is divulged.

It is no secret that IJM plans to exit SGB. To recap, in September 2012, IJM took up a 25.08% stake in SGB, forking out RM149.31 million for the acquisition and referring to it as a “fast and reasonable” entry into the rapidly expanding oil and gas sector.

The acquisition involved the subscription for 119.11 million new shares in SGB, representing 10% of its issued and paid-up capital, for RM39.306 million cash, or 33 sen per share, and subscription for redeemable convertible secured preference shares of an aggregate nominal value of RM110 million cash.

In February 2016, IJM converted the redeemable convertible secured preference shares, effectively becoming SGB’s largest shareholder with 24.41% equity interest in its enlarged share capital. The conversion price of 36.5 sen each was 143.3% higher than SGB’s share price of 15 sen at the time.

At end-March 2017, Soam said IJM was open to selling its block in SGB.

So, what went wrong?

“There was no reinvestment (in SGB) … the shareholders did not inject any capital into the company,” says a market watcher.

He highlights SEB selling its machine shop business to OMS Holdings Pte Ltd for RM327.68 million and, instead of reinvesting the money, it paid out 29.5 sen in a special cash dividend, which worked out to an almost RM80 million payout, largely to SGB.

For a company that has posted losses for many years SEB has paid out quite a bit of dividends (see table).

In FY2012, SESB undertook a cash distribution of RM135.6 million or 18.5 sen per share to its shareholders after a reduction in the par value of its existing 733 million shares to 45 sen from RM1 and the reduction of its share premium account, giving rise to a credit of about RM525.07 million, partly used for the capital repayment, and also to set off the entire accumulated losses of the company, which as at Dec 31, 2011, stood at RM362.04 million. The rationale for the exercise was to reward its shareholders and improve its financial position by eliminating accumulated losses.

Apart from the cash distribution, SESB also paid out quite a lot of dividends (see table).

While some say SGB never benefited from political patronage, others point to the Ophir oilfield, the marginal oilfield developed by Australia-based Octanex NL, which had a 50% stake in a joint venture with SESB (30%) and Petronas’ wholly-owned subsidiary Vestigo Petroleum Sdn Bhd (20%). This shows that SGB and SESB did get government assistance.

“It’s not as if Octanex and Vestigo needed SESB in the JV,” an oil and gas source comments.

On Jan 11 this year, SESB said it had omitted to announce certain related-party transactions in relation to sums advanced to its 65.64% parent SGB and subsidiaries from June 2016 to June 2018, amounting to RM64.33 million. Of this, RM19.39 million was related to a shared service agreement between SESB and SGB and was not regarded as a related-party transaction. Of the remaining RM44.94 million, SGB has repaid RM9.7 million to date.

Days later, SESB said that of the agreed payment schedule with SGB, the latter paid RM300,000 and transferred property valued at RM6.5 million. A day later, SESB clarified that its parent owed it RM47.83 million, not just RM28.44 million.

The RPT, advances and shared service agreement with SGB occurred between June 2016 and June 2018, and SESB is investigating the advances on the grounds that they were done without board and audit committee approval.

According to sources, SESB could be looking to distance itself from SGB. “SESB’s outlook is okay with oil prices stabilising. SGB, on the other hand, seems to be sinking,” he says.

SESB’s 2018 annual report listed a total of RM4.67 million in RPTs with SGB and RM10.15 million to related parties. Also from the annual report, there is RM9.99 million due from SGB and RM21.54 million from related companies. SGB’s annual report for FY2018 has no mention of such transactions.

Lee, a nominee of IJM, and Tse are on both SGB and SESB’s boards. Would their knowledge of the RPTs be deemed as SGB being aware of the transactions?

In the Jan 11 announcement, SESB said it has initiated an investigation into the advances on the grounds that they were done without board and audit committee approval. The investigation should end by end-April.

What will the investigation unearth and will the findings be disclosed to shareholders?

Surely, SESB and SGB minorities would also like to know how far Scomi will fall.