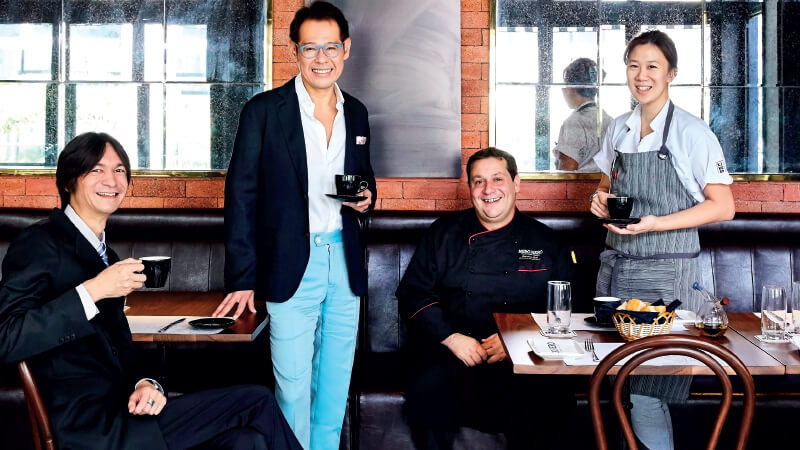 IT’s the ultimate illusion. Behind all the hard graft, family-unfriendly hours, blood, sweat, toil and tears associated with the food and beverage industry, it’s still seen as one of the most exciting, glamorous even; after all, few things are as sexy as the talent and ability to be creative and then, literally, feed off it — the real-life version of “to have one’s cake and eat it too”, I suppose. Who can dispute the white-hot appeal of establishments like Mayfair’s Sexy Fish (we are still in awe of the purported £20 million fit-out cost that garnered it accoutrements like a 13ft Frank Gehry crocodile artwork as well as two patinated bronze mermaids by Damien Hirst) and, closer to home, Matt Abergel and Lindsay Jang’s Yardbird and Ronin in Hong Kong, and Gaggan Anand’s eponymous resto in Bangkok? And the best part is you needn’t have to be a whizz in the kitchen. All you need is an appreciative palate and, of course, the means and EQ to attract the industry’s best talents.

Case in point, Datuk Paul Poh. Relatively low-profile (except to those who move in high net-worth circles or play good games of tennis), the CEO of private investment vehicle Caprice Capital International recently raised more than a few eyebrows around town when he unveiled not one but three cool restaurants that took up the entire third floor of DC Mall in Damansara Heights. Pretty ballsy, more so given the state of the ringgit and general market sentiment. With Abbi Kanthasamy of Cinnamon Group, which owns popular restaurants around town like Nadodi and A Li Yaa, as partner, Poh’s new F&B foray includes a sports bar, an Italian restaurant and a French-Japanese tapas bar.

Poh, 44, enjoys a stellar corporate career, having held various top positions within Hong Leong Group prior to setting up Caprice Capital; and the Penang-born, Melbourne-educated boy has always been better known for patronising restaurants, not owning them. “But those who know me know I really love to eat,” he remarks as he takes us on a tour of his new venture. “I do enjoy fine dining, especially when I travel but my earliest and fondest memories of food are from my childhood days growing up in Penang. To this day, the local fare of the island is my favourite and something I look forward to indulging in and enjoying whenever I visit my hometown.”

Divided into three distinct spaces, Locker Room is essentially a casual sports bar and grill that offers a wide variety of nibbles, ranging from sushi to mutton varuval (the best accompaniment to a cold beer, in my opinion) and a most appealing ‘happy hour every hour’ concept, while Nero Nero essentially serves Italian-inspired food with a light Californian streak. The star of the three, however, is Kikubari — a tapas-style Japanese-French fusion restaurant. If you can’t get your head around as to what that entails, think foie gras lollipops or perhaps pigeon in a Perigord-inspired sauce heaped with morel mushrooms. Although all three have just been soft-launched, saunter in on any given evening and you’d already find all the usual top-tier archetypes of Kuala Lumpur society spread out among the outlets. There’s the tycoon enjoying a casual pasta and pizza meal with his family. The city’s brigade of gorgeous “It” girls and boys are grazing on inventive bites while making gorgeous for their Instagram updates at Kikubari while Locker Room sees the city’s young and restless investment bankers huddled over cold beers and bottles of Japanese whisky after yet another intense day at work. “We want all three places to be a destination for good food and ambience,” says Poh. “It can be your neighbourhood haunt, a stop on your way home from work, a place to celebrate your birthday, first date or 50th anniversary, or the last port of call at the end of the night before you finally call it a day.”

Famously astute, Poh has no illusions about running restaurants. He’s working with a seasoned restaurateur and has already hired the best people. We are particularly charmed by the sleekness of Kikubari, which takes its name from the Japanese phrase, “care for others”. Certainly, it garnered the attention of the city’s culinary cognoscenti when Yuhei Teraoka was named general manager and chef sommelier of all three spaces. Those familiar with the finesse of Teraoka’s inimitable brand of attention and service would be pleased to know it’s already reflected in Kikubari’s selection of wines, which includes a 1978 bottle of Henri Jayer’s mighty Richebourg — exceedingly rare and eye-wateringly expensive. The asking price? “RM260,000,” says Teraoka with a big grin. After hearing how much the legendary grand cru costs, the price of a 1982 Latour or a 1993 Romanée-Conti seems a right bargain in comparison. But it’s not about dropping small fortunes at Poh’s outlets but rather about providing scope and breadth for diners to take their meals to whichever level they desire. This is demonstrated by the fact that a selection of grower champagnes has been provided, allowing connoisseurs and wine newbies alike to taste, learn and discover special names like Agrapart, Diebolt-Vallois, Pierre Peters and Pierre Moncuit. All stemware is, reassuringly, by Riedel, including some from its special sommelier series. If you know Poh personally or have access to his team, then you’d be among the lucky few to be assured of seats at the much-coveted eight-seat counter presided over by Chef Jun, although the entire space fits 32 stylishly.

We couldn’t resist asking Poh what propelled him to enter such a famously challenging industry, particularly when life seems more than comfortable in every way, to which he jauntily replies, “It all happened after a few whiskies, really. This must have been about two years ago and I can’t even recall the exact details of that night. It must have been at Mezze.” He chuckles as he references the famous watering hole of his friend and now business partner Datuk Jagan Sabapathy, with whom he teamed up to open The Birch, which is located at the entrance of DC Mall.

“I remember having a drink with Abbi. We’re good friends. I frequent his restaurants and have always liked their concepts. Somehow, we got to talking about the new Damansara City development and that was it. A few meetings later, we picked the rooftop of DC Mall for our outlets due to its unique design and the fact that we had ample space for al fresco dining.”

Poh also admits that his introduction to the tough world of F&B entailed a steep learning curve. “My experience, up until this, was limited to that of patron. The biggest challenges are to attract talent and to give them the hardware to recognise their potential. You also need to empower them, give them certain ownership. If not, it’s easy for them to get poached and then you’re back to square one! We’ve set parameters but within that, they have the space to be creative and we ensure that they have equity for continuity. I believe in giving people careers, not jobs. It’s a ‘one dream, one team’ policy. This approach has worked for us so far and we don’t intend to change it. It’s too early to tell if the lessons learnt in the corporate world will prove equally effective in the F&B space. However, I think the basic principles of passion, determination, commitment and integrity will lay strong foundations for success — regardless of the industry,” he says philosophically.

On his own observations of food and eating out, Poh says, “It’s all about taste and service is very, very important. You need to feel comfortable. I’ve been to places where I feel really at home and relaxed and that’s so important for an island boy like me.” Certainly, all of the pleasures of island life are deeply imprinted in Poh’s psyche and he shares how he’d always wanted to be the general manager of a beach hotel. “I studied at Uplands (the international school near the tourist beaches of Batu Ferringhi in Penang) and I used to hang out at the beach after school with my friends and that made me so happy. All you needed then was a pair of board shorts and you were all set! Until today, even if I go to London or Hong Kong, I still like a proper beach holiday afterwards to recover from the ‘holiday’,” he laughs. “And it needn’t be anywhere far or fancy. I’m happy to go to Redang, Phuket or Samui anytime!”

Poh’s propensity for activity also means that he’s not the sort to park himself in a hammock all day. “What do I like to do at the beach? Fish,” he smiles, broadly. “I’m not into deep-sea fishing for marlin or anything like that. I’m happy enough if I can catch a fish or two for my own dinner.” For now, however, dinners for Poh generally revolve around his new F&B spaces. “After opening them, the first thing I realised was that most of my meetings had moved from my office to the long table at Nero Nero,” he laughs. “Obviously, I still need to entertain and, naturally, it makes sense to do it at my own outlets. It’s more comfortable but, at the same time, more stressful as it really, really matters now what people think of the food.”

Despite having his hands full with three outlets, not including The Birch, Poh has already thought long and far ahead, with franchising as an option, particularly for Nero Nero, as well as a few more outlets. “Our vision of Nero Nero is to do one and get it right, for now. If we get approached, particularly from other parts of Asia, it’s something we’d consider. Now, we just need to focus and ensure we provide a great experience to all our customers. I’m taking each day as it comes.”