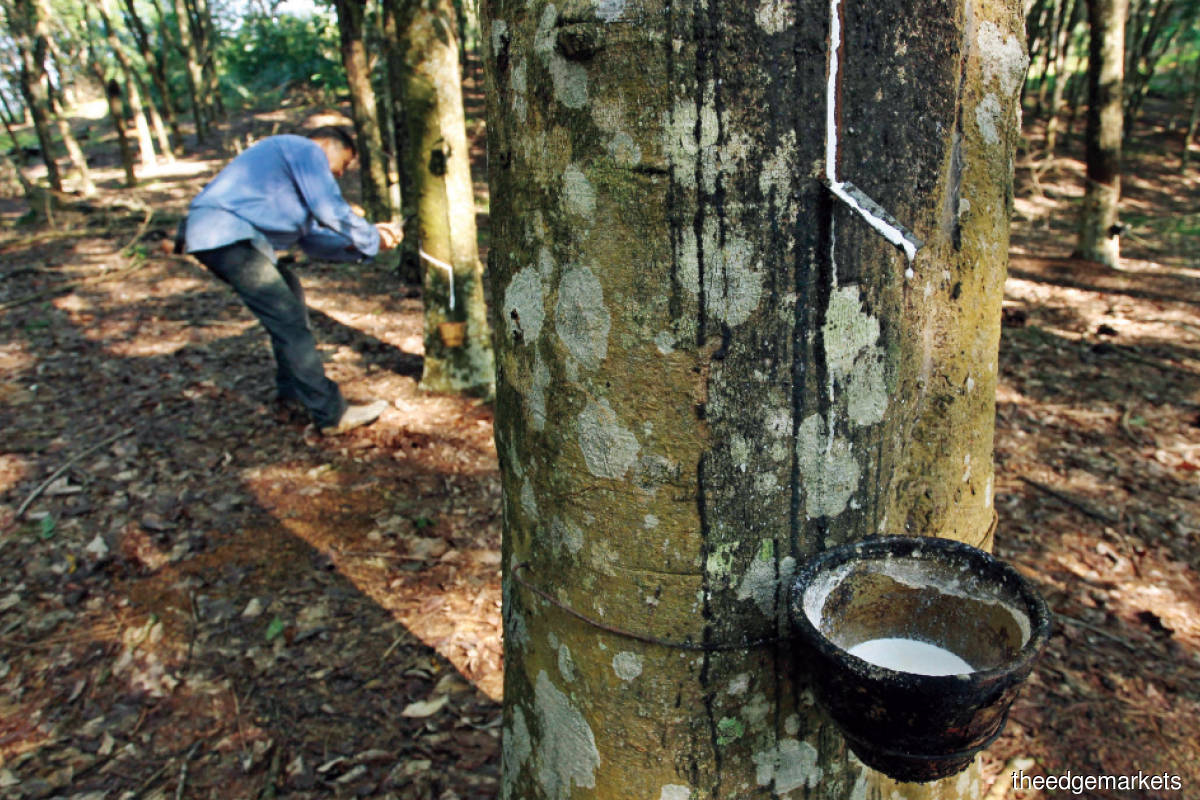 LOW productivity, an ageing smallholder population and uneconomic farm sizes — these are some of the major issues faced by rubber farmers, who collectively produce 95% of the country’s natural rubber, according to the Association of Bumiputera Rubber Entrepreneurs Malaysia (PUGBM).

Its president Kameruzaman Ab Rahman says the group, which is made up of largely senior citizens, produces between 1,400kg and 1,430kg of natural rubber per hectare in a year — a far cry from the 2,000kg to 2,500kg per ha that rubber tree clones can produce.

“The low productivity is due to the fact that many of these smallholders don’t practice good agronomic practices. A 2012 survey by the Malaysian Rubber Board (LGM) found that almost 44% of smallholders [have] never fertilised their farms while 42% only do it once a year.

“A majority of these smallholders own a small rubber farm of about 2ha. A farm of that size with an annual productivity of 1,400kg per ha would typically give them a monthly income of RM900 to RM1,000,” he says in a recent interview with The Edge.

It is worth noting that Malaysia’s poverty line income was recently revised from a monthly household income of RM980 to RM2,208. According to Kameruzaman, there are about 450,000 Malaysian families involved in the rubber sector. This adds up to 2.25 million people, or an average of five people per family, who live off the commodity.

Abdullahrus Mohd, 47, his wife and five children are one such family. He has been tapping rubber since he was 15 and now owns three acres (equivalent to 1.2ha) planted with rubber trees in Titi, Negeri Sembilan. He acquired the land from the government under the Fringe Alienation Scheme (Rancangan Tanah Pinggir) in 1997 and paid off the loan some years ago.

The eldest of 11 children, Abdullahrus, or Along to family and friends, has had to help support his family since his teens and one of the few things he could do was tap rubber.

But rubber is not his only source of income. Abdullahrus also works as a landscape gardener with the local town council.

“The income from rubber is for holidays or extraordinary expenses. It’s hard to survive on rubber alone. We get only RM1.60 per kg from the rubber we sell. One kg of rice is how much?” he asks rhetorically.

Abdullahrus taps his trees only on weekends and collects the cup lumps in the early part of the following week.

Smallholders produce two types of natural rubber: field latex, which makes up 30% of the country’s total rubber output, and cup lumps, which account for the remaining 70%. The latter is basically coagulated latex left overnight in tapping cups.

Kameruzaman explains that it is more labour-intensive to produce field latex because it has to be collected the day it is tapped. A tapper also needs to complete two rounds of tapping and collecting the latex, which takes a total of eight to 12 hours daily.

On the other hand, cup lumps require only two to three hours of work, as the latex in the cup is collected on another day. This allows rubber tappers to cover about 1,000 trees a day compared with 450 trees for field latex.

“Although field latex fetches a slightly higher price compared with cup lumps, tappers still end up earning more from the latter, given the higher volume, not to mention the simpler work process. Besides, field latex has a much shorter shelf life, which makes it riskier to produce.

“Unlike cup lumps, field latex cannot be stored for long, which puts it at a disadvantage because processing plants require a minimum quantity for purchase, which means that smallholders can’t store their field latex for too long to meet the requirement,” Kameruzaman explains.

According to LGM, at one time, more than 50% of Malaysia’s upstream rubber production was made up of field latex, but this has shifted over the years to more than 90% in cup lumps now.

Rubber expert Dr Sivakumaran Seeni­vasagam says the rubber smallholders in Malaysia produce mostly cup lumps because of the lack of price incentive, the laborious nature of harvesting latex and the scarcity of collection centres.

“The farmgate prices for cup lumps and fresh latex are very minimal, with no incentive given for the farmer to produce latex. With cup lumps, the farmer need not collect his produce every time he taps his trees because he leaves the latex to auto-coagulate in the cups and normally collects them once weekly or fortnightly after five or six tappings because it’s less strenuous. Whereas with latex, he needs to collect it a couple of hours after tapping,” he says.

Sivakumaran, who has served with LGM and the Rubber Research Institute of Malaysia, adds that smallholders have to travel some distance to deliver the latex to factories whereas, in the case of cup lumps, collectors operate in virtually all the towns in Malaysia. Like Abdullahrus, Ho has been tapping rubber since she was a teenager. She and her husband continue to tap rubber daily from 3am to 7am.

Their estate, also in Titi, measures three acres and yields 80kg to 90kg in a day. In their younger days, the couple also tapped trees in other estates, proceeds from which were split with the owner.

“Otherwise, it was not enough for my family of five kids. It was a tough life; we lived from hand to mouth,” she says.

These days, income from rubber tapping supplements the contribution from the couple’s grown-up children to their daily expenses. Aside from rubber, Ho also sells durian seedlings to tide her over periods of low rubber prices and the wintering season, when rubber trees stop producing latex.

“Rubber prices are volatile and low, but the cost of living has been rising. It’s not easy to sustain. I don’t see young people going into this,” she says. None of her children are in the rubber trade.

In idyllic Titi, which is experiencing a tourism boom because of to its popularity among cyclists and big bikers from the Klang Valley, the recent spike in demand for gloves, owing to Covid-19, seems like a remote phenomenon to Ho and Abdullahrus.

Kameruzaman says the recent increase in average selling prices for rubber gloves has not translated into higher prices of latex concentrate, which is processed from field latex and used in the manufacturing of rubber gloves.

This is because glove makers have the option of using synthetic rubber to make their products.

He adds: “Even if they use latex concentrate in their products, these firms source the raw material mainly from neighbouring countries such as Indonesia and Thailand, as the prices are cheaper, with no import duty, and the supply is unlimited compared with that in Malaysia.

“These are some of the main reasons rubber smallholders in Malaysia are not driven to produce field latex even with the spike in global demand for rubber gloves. As far as the smallholders are concerned, the rubber glove hype is almost irrelevant to them.”

He points to the availability of higher-yielding clones with potential annual yields of 3,000kg to 3,500kg per ha through LGM’s breeding and selection programme. Another development is technology that can lead to higher tapper and land productivity such as a once-a-week tapping system in combination with yield stimulation without compromising yield productivity, which would be attractive to ageing smallholders.

“The maximising of tapper productivity will reduce the costs of production per kg of rubber, since tapping costs make up more than 60% of production costs and thus increase the margins earned per kg of rubber despite the low selling prices. This will lead to higher profitability per ha,” he explains.

Sivakumaran recognises that the adoption of mechanisation and automation in tapping and crop collection continues to be challenging, especially when field latex and cup lumps are sold cheaply. With advances in technology and artificial intelligence, however, he says it may be possible to develop systems and gadgets that are effective and economical to use.

While research and development in the rubber industry has been carried out for nearly a century in Malaysia, with various technologies developed in the upstream and downstream sectors, there is a gap in adoption in the field to resolve technical problems encountered and make rubber an attractive crop for smallholders.

“This glaring abnormality in uptake of developed technologies is something that policymakers in the highest levels of government must come to grips with, since growers are still held to ransom by rubber prices, which are beyond their control. It’s a situation that has persisted over several decades since rubber cultivation began in Malaysia. It appears as though nothing has really changed,” Sivakumaran says.

Given this scenario, he strongly believes that a grower who depends entirely on prices to survive should not cultivate rubber.

Meanwhile, pending the approval of the Cooperatives Commission of Malaysia, ­PUGBM is setting up a cooperative that will come up with short- and long-term plans to help improve the livelihood of rubber smallholders

“PUGBM is optimistic that there is still a chance to get Malaysian smallholders back into the latex business. Continuous efforts and a thorough study are crucial in this matter. It would be more effective to carry out this latex production effort in a group to achieve economies of scale,” says Kameruzaman.

“My hope is for the government to institute a minimum price for rubber. That will help us smallholders a lot,” says Abdullahrus, whose rubber trees are over 20 years old. Nonetheless, he has no plans to replant, despite the current low prices.

“If I replant, how old will I be when they mature? And I will lose a source of income if I chop them down now,” he explains, adding that he can get about 200kg of rubber a week from his estate.

He does not foresee any of his children taking over the rubber estate. “They grew up differently from me and they would want a higher standard of living. They wouldn’t want to have this kind of life,” he says. His eldest son already works as a cashier in a Mr DIY outlet in Kuala Klawang, near Titi, while his second son works in an electronics factory nearby. His three other children are still in school.