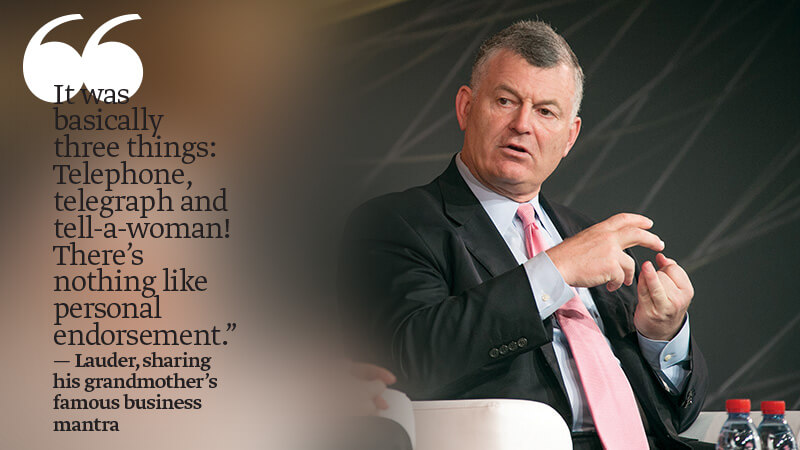 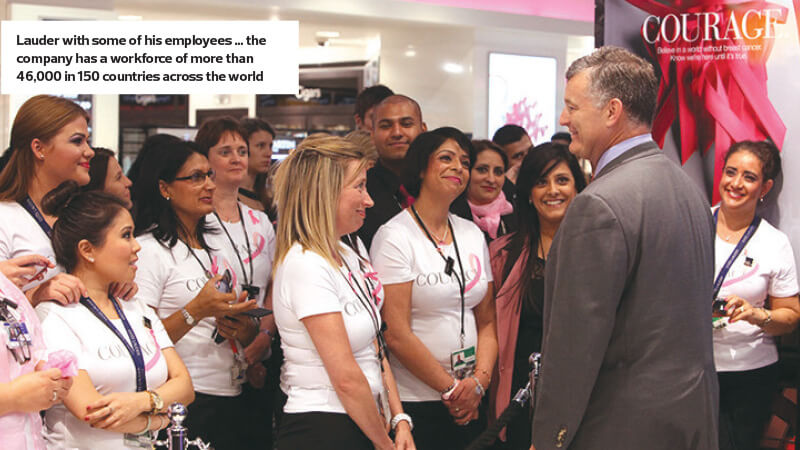 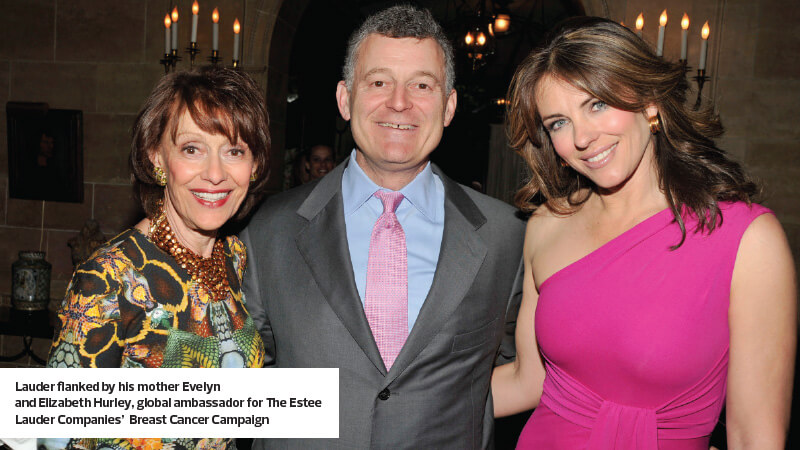 Monaco, set in the heart of the Côte d’Azur and boasting luxurious hotels, a yacht-packed harbour and glamorous casino, has traditionally been the playground of the world’s rich and famous. But for a few days in summer every year, it also becomes the hub of ideas, meaningful discourse, elite networking and inspiring talks as the annual EY World Entrepreneur Of The Year programme gets underway.

This year, one of the event’s keynote speakers stood out in particular. As executive chairman of The Estée Lauder Companies, whose portfolio of brands ranges from household names like Estée Lauder (but of course), MAC, Bobbi Brown and über-deluxe skin cream and my personal favourite “face-saver” Crème de la Mer to artisanal perfume labels like By Kilian and Frédéric Malle, William P Lauder needs no introduction, particularly to the beauty industry’s onlookers.

Having joined the company in 1986, the 57-year-old actively carries on the legacy of his grandmother, the inimitable Estée Lauder herself. Stepping onto the stage at the Fairmont Monte Carlo, he looked completely at ease in facing the gathered crowd of international executives. Dressed in a smart dark suit matched with a blue shirt and pink tie, Lauder warmly greeted EY’s global vice-chair of markets and chair of its global accounts committee Uschi Schreiber before sitting down to talk candidly about the business of beauty, addressing, in particular, how long-term family businesses can succeed in a rapidly changing world.

Those who sat close to the stage would have noticed something extra in Lauder’s ensemble — a pink ribbon pin festooned on his lapel. This simple accessory assumes even more significance this month as the Estée Lauder Companies’ Breast Cancer Campaign marks a 25-year milestone. For a business founded on the pursuit of beauty, it was a bold and unprecedented move when, led by Lauder’s late mother, the visionary Evelyn, it decided, in 1992, to highlight the growing global health issue of breast cancer.

It was Evelyn who championed the movement, co-creating the now-ubiquitous pink ribbon and helping establish the non-profit organisation, The Breast Cancer Research Foundation (BCRF). Honouring his mother’s legacy, Lauder, in his capacity as executive chairman of the company, continues her efforts. Already, 150 million pink ribbons have been distributed to the Estée Lauder Companies’ beauty counters worldwide. Naturally, several iconic monuments around the world will also be illuminated in pink, a tradition that is reflected locally with a rose-hued KL Tower during this period. Other key buildings going pink in order to raise awareness of breast health include Paris’ Eiffel Tower and the Duomo Cathedral in Milan.

A quick scroll through digital media also shows the #PinkRibbon25 hashtag gaining momentum. Pledging its continued commitment to the cause, The Estée Lauder Companies has raised US$70 million to date and is aiming for its largest-ever one-year fundraising goal of US$8 million to support the breast cancer campaign (the word “awareness” has been noticeably omitted as the cause now has the global spotlight it deserves). Other efforts include the donation of US$25 to fund BCRF for every unique post on Instagram or Twitter with the #PinkRibbon25 and #ELCdonates hashtags between Sept 15 and Oct 31 this year with the end goal of funding 500 research hours.

The story behind the brand

As an industry behemoth, Estée Lauder’s provenance is familiar to most among us. Lauder’s grandmother had started out by helping her chemist uncle with his beauty product business before growing it into one of the great businesses of the 20th century. The company now enjoys instant global recognition, net revenue of more than US$11.3 billion (as per its financial year ended 2016), a workforce of more than 46,000 in 150 countries across the world and a roster of no less than 25 extraordinary brands. I myself grew up with the company’s glossy ad campaigns starring, almost exclusively at the time, the stunning Czech-born supermodel, Paulina Porizkova. The Estée Lauder brand then expanded to include Aramis, followed by Clinique and other already-notable names, including Aveda, Bobbi Brown, MAC and Smashbox, via acquisition. Schreiber was not wrong when she introduced the company as the “world’s largest market leader in aspirational, prestigious luxury”. The company’s reach extended even to the rooms of the Fairmont hotel where we were staying, featuring in-room amenities by Le Labo, a New York-based perfume house that is now one of the group’s hipper and much sought-after boutique brands.

All in the family

As a Lauder, it was almost destined that the young William would one day join the family business, which he duly did 31 years ago, rising through the ranks to the level of CEO in 2004, a position he held through to June 2009 before transitioning to his role today as executive chairman.

It is interesting to hear Lauder speak about the challenges as well as opportunities in today’s fast-paced, rapidly changing business landscape. “Beauty is the entry point of luxury,” he states immediately. “One of the first things people spend on as an introduction to luxury is beauty.” True that. After all, a bottle of perfume by Frédéric Malle, for example, is within closer reach than, say, a crocodile Birkin to most consumers.

On how the beauty industry hasn’t been spared the effects of global turbulence, particularly in the past 10 years when the retail relationship pyramid has seen (and felt) the most palpable changes, he comments, “We have to realise that change is the only constant now. We at Estée Lauder are having to change the way we work, motivate and interact with the consumer. It used to be editors and beauty editors who were sought after for their expertise. Now, it can be the 16-year-old who reviews [the product] from her room, posts it on YouTube and is an authority. The nature of how consumers interact has changed, so then our business strategy has to. It used to be that all you had to do was, say, place an ad in Vogue or a 30-second commercial on television. Now, an email could be the call to action!”

With innovation cited as one of the key factors for the continued success of a business, Lauder says it is up to them to “remind the consumer that we are innovative and exciting”. While the barriers to scale remain fairly substantial, Lauder also points out that there are zero barriers to entry. “People are looking for new things at the expense of what’s traditional while the consumer is also far more oriented towards products that are innovative.”

Currently, e-commerce represents 13% of American retail sales, a fact that Lauder puts down to customers still liking to see, touch and feel before buying. “Some other industries have been very impacted,” he points out. “Remember, for example, Tower Records? Ours, not as much as there really is no substitute for what you can see, feel, touch and experience in our stores.

“Shopping is actually not as much active consumption as it is entertainment. So, our job, together with our retailers and partners, is to make it as pleasurable as possible — a very subtle but important difference — and we need to make it fun and exciting for her (the consumer).”

On the industry’s gender diversity, Lauder concedes that 95% of its consumers remain women. “Men are great ‘borrowers’” — at which point Schreiber interrupts, asking if he himself is a ‘borrower’. “Hey, I’m the one who brings home all the products,” he laughs, “but, yes, I am a borrower!”

And although technology has affected the way the company does business, for example, in being able to scan QR codes on packaging and accessing a host of how-to videos, Lauder shares a business lesson his grandmother taught him in the 1960s. “It was basically three things: Telephone, telegraph and tell-a-woman! There’s nothing like personal endorsement,” he chuckles. “And so our mission must always be to surprise and delight the consumer. Nothing can substitute the feeling of ‘I have to have it’. But the biggest validation of innovation is when consumers vote for it with their pocketbook!”

Lauder also shares interesting facts gleaned from international marketing, like how Asians prefer skincare to makeup and Europeans lean more towards fragrances while the US market strikes a happy balance between fragrance, treatment and makeup. He also lets on that the group’s single largest retail point is located, in fact, in Asia — at Seoul’s Incheon Airport, which Lauder describes as “a shopping mall that planes pull up to”. The one major similarity that the Estee Lauder Companies has with many other companies is the great impact China has had on its bottom line. “Chinese consumers are the most influential in the world right now,” he stresses. “They have changed the dynamics completely and this is true wherever their footfall is felt in the world.”

High up on Lauder’s agenda is his desire for consumers to see the uniqueness of the company’s brands, all of which are in different stages of evolution. “You cannot,” he explains, “expect a brand that is in its adolescence to have the same abilities as one that is 25 years old, which would obviously enjoy a deeper connection with its market.” Naturally, Estée Lauder’s excellent and consistent track record spanning seven decades and counting is a great asset. “We stand for an environment where anybody, and not just those who carry our last name, can do well in. In fact, there are only five or six of us from my generation and we are 46,000-strong.”

Proving that beauty isn’t skin-deep, equally high up on Lauder’s agenda is to continue and build on the company’s philosophy of being human and valuing its staff and associates. “I worry about the health and welfare of our employees every day,” he says. “Everyone is part of the family and we take care of our family. In fact, I used to remember when my grandparents would go to Florida for a month or so every winter and each employee — there were about 30 to 40 of them at the time — would get a bushel of oranges. It was a small gesture but it let people know they were being thought of and cared for.”

Lauder adds cheekily, “Grandpa used to say you can pick your friends and your nose but not your family. So I would never want to put family members in the position of feeling they have to join the business. If it’s a case of ‘have to’ versus ‘want to’, they can’t do their best work. So it’s up to us to stimulate a sense of pride and possession.”

He reveals, however, that there are a few rules for those wishing to join. “First thing, you need a good education, followed by good practical education. You should spend at least three to five years outside the family’s protective umbrella and then only talk about coming in.”

And Lauder’s advice on how to draw the next generation in? “By positive engagement … this could be over conversations at the dinner table or by inviting them to events so they feel it’s theirs — not from a financial standpoint but an emotional one. Make them see how fun it is and then show them the way.”

It is reported that 1 in 20 women in Malaysia may get breast cancer in their lifetime. Early detection and prevention is essential for the successful treatment of the disease.

“We are truly encouraged to see greater awareness amongst Malaysians of breast cancer today, and we hope that through our campaign, women and men will be more purposeful in going for screenings, knowing the risk factors and how they can reduce the risk of breast cancer happening,” says Estée Lauder Malaysia managing director Paul Slavin (pictured above).

“Breast cancer does not discriminate; everyone must play their part.”