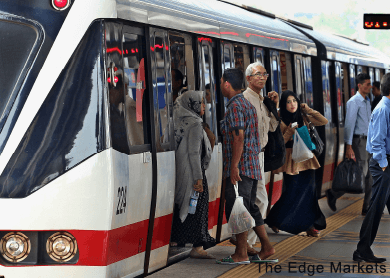 RUNNING a public utility company is never an easy job, especially when the tariffs or fares are regulated.

Azmi Abdul Aziz, who took over as managing director of Prasarana Malaysia Bhd in January, already has a taste of the tough task ahead of him.

The government recently announced a rise in public transport fares but has since backpedalled on the decision.

“The bus fare from Bangsar to KL Sentral is RM1 and that is the busiest route … it’s cheaper than teh tarik,” Azmi laments. Nonetheless, he is hopeful that there will be a hike in light rail transit (LRT) fares this year.

While bus fares are slated to be bumped up by more than 22% in the middle of next month, an increase in rail transport fares is still pending.

Currently, rider fare is the key source of income for Prasarana, accounting for 90% of its revenue. The public transport operator is still loss-making, although on the bright side, ridership has been growing each year. Indeed, Azmi expects Prasarana to soon hit the one million passenger a day milestone.

Azmi is quick to point out that due to Prasarana’s large asset base of RM14.27 billion, it will incur hefty depreciation and finance costs. He also stresses that the company’s rail operations have always been cash-flow positive and thus sustainable.

“Putra LRT and Star LRT were okay in terms of operational expenditure but they had difficulty in repaying debt. Prasarana bears the holding cost of the assets, so we get hit by the depreciation and finance costs. Every year, because of the accounting standards, we have to make provisions for depreciation of RM400 million,” Azmi tells The Edge.

He also highlights that Prasarana’s current accounting treatment is appropriate for it, although the hefty sum drags down its earnings. “Prasarana as an asset operator is a very different animal from Prasarana the asset owner — carrying the assets for the government.”

Azmi rubbishes the public misconception that Prasarana is subsidised by the government. That is far from the truth, he says, because the government backs Prasarana only on raising funds for capital expenditure (capex), not opex. “We have to generate our own income [to sustain our operations].”

Like it or not, taxpayers worry about Prasarana’s financial health, recalling that the entity was formed to take over the public rail transport run by Projek Usahasama Transit Ringan Automatik Sdn Bhd (Putra LRT) and Sistem Transit Aliran Ringan Sdn Bhd (Star LRT) as the latter operators were crumbling under a mountain of debt. The two rail lines cost Prasarana RM7.8 billion in total.

Bus operators Intrakota Komposit Sdn Bhd, owned by DRB-Hicom Bhd, and Park May Bhd, a unit of Renong, were taken over for close to RM177 million and RM14.4 million respectively.

Another asset that Prasarana added to its stable was Langkawi Cable Car, but this is not a major revenue earner.

All these acquisitions were perceived as bailouts as Putra LRT was then owned by Renong Bhd, which stumbled during the 1997/98 Asian financial crisis while Star LRT was run by a group of businessmen.

But to be fair, the government had to step in with a helping hand, otherwise the Klang Valley’s public rail transport would have been crippled.

The good response to Prasarana’s issue of RM2 billion Islamic medium term notes earlier this year could be taken as a sign of confidence in the public utility company but some quarters note that the sukuk was well received because it was guaranteed by the government.

“It was oversubscribed by about three and a half times and there was a lot of positive response from the local market … local funds are already asking us when the next issuance will be,” Azmi remarks.

Despite the seemingly heavy expenditure, the sukuk attracted the interest of more than 50 local funds. However, this could be attributed to a restriction on local funds investing outside the country that was imposed by the government earlier this year.

While the local funds have thrown their support behind the bond, the question is, can Prasarana stomach such a large issue of securities and its grandiose plans — a third LRT line at a cost of RM9 billion, extensions at RM7 billion, not to mention seven property projects?

Several big plans that revolve around transit-oriented developments (TODs) are being put in place to propel Prasarana and boost its finances.

Prasarana is tying up with property developers on the TODs (see accompanying story), which will ultimately result in the outfit either owning assets such as shoplots or selling the properties for much-needed cash. The aim is to increase its non-fare revenue from 10% now to 30% by 2017.

While managing the once-distressed assets, Prasarana is also looking to build LRT 3, which will link Bandar Utama to Klang, extend the Kelana Jaya line by 17.4km for a total length of 46.4km and add 13 new stations all the way to an integrated station in Putra Heights. Meanwhile, the extension of the Ampang Line from Sri Petaling to Putra Heights will pass through Kinrara in Puchong, involve 12 new stations and extend the line by about 18km for a total length of 45.1km.

Other than the hefty construction bill, Prasarana will also fork out RM1.6 billion for rolling stock from Canadian outfit Bombardier.

Last year, there were some disputing views between MRT Corp and Prasarana over the ownership and operation of MRT 1.

Azmi, however, reveals that the ties have since been mended, which could mainly be due to the changing of the guard at both Prasarana and MRT Corp.

MRT Corp is also wholly owned by the Ministry of Finance (with a single share owned by the Federal Land Commissioner). While Prasarana has a sprawling asset base, MRT Corp is the developer and asset owner of the MRT project that is currently under construction.

Azmi explains, “MRT Corp will manage the (MRT) assets, Prasarana will operate the assets, but they (MRT Corp) are the asset owner … so there will be some agreement between Prasarana and MRT Corp.”

Above both these companies is Suruhanjaya Pengangkutan Awam Darat (SPAD), which is the Land Transport Commission that oversees the entire development.

Its main asset is the RM36 billion Sungai Buloh to Kajang line that is still under construction while the multibillion-ringgit Sungai Buloh to Serdang and Putrajaya line and a circle line around the city are both still at the proposal stage.

The ongoing projects of Prasarana and MRT Corp require hefty investments, so the risks are more spread out than in the existing model. “It’s good not to have all your eggs in one basket during this time. Operations-wise, it is sustainable but we have to look at how to monetise the assets — TODs are something we have started,” Azmi says.

With the billions being spent on the new lines, LRT extensions and the MRT, Azmi and Prasarana will likely be busy for the next few years and remain in the glare of the public. 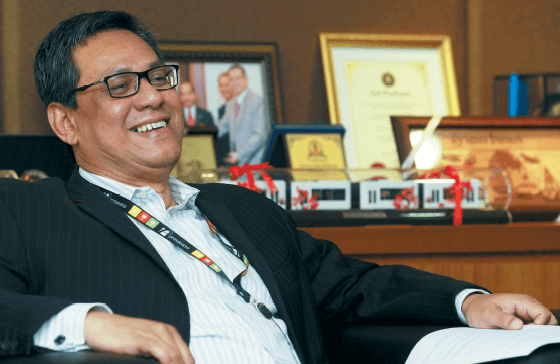