Cover Story: How MM2H stacks up against similar programmes in Thailand and Portugal 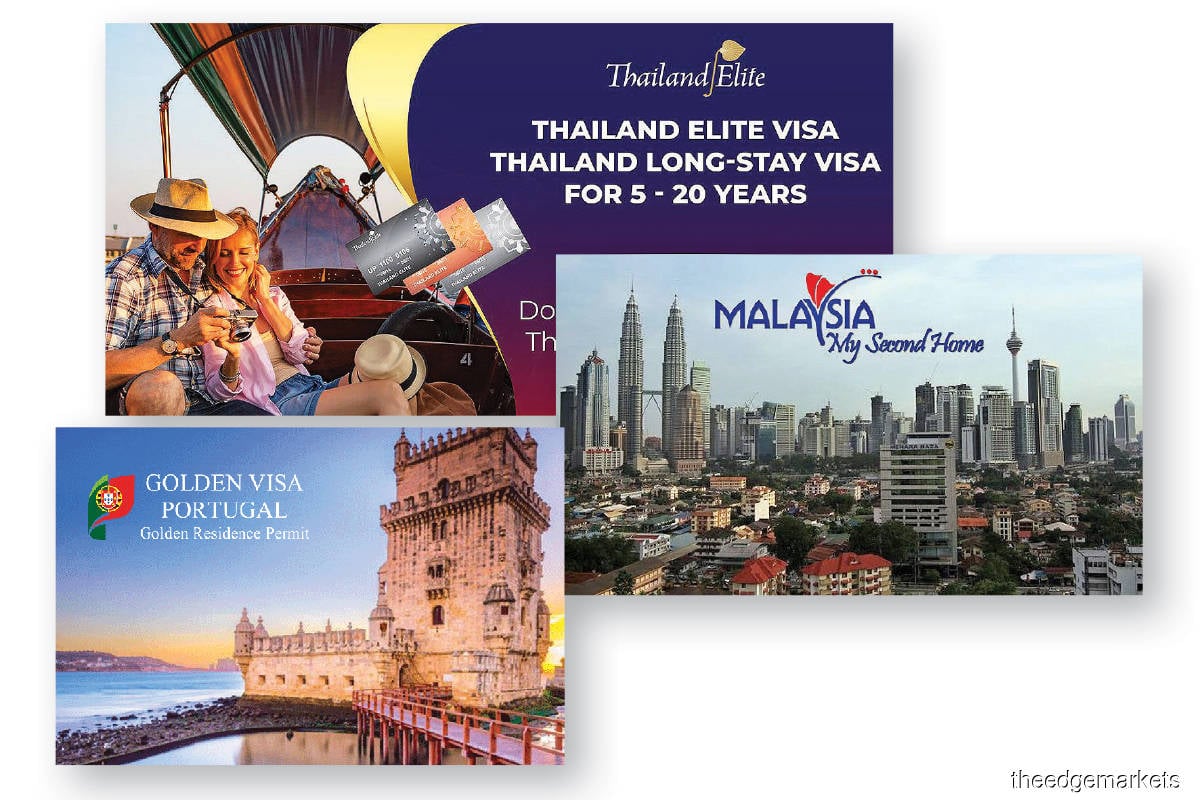 EARLIER this month, Thailand relaxed its visa rules to make it easier for foreigners and long-term tourists to stay in the country, as it looks towards these groups to generate about THB1 trillion (RM127.2 billion) in new spending for the economy between 2022 and 2026, during which some one million foreign residents are expected to provide THB800 billion in investments and THB270 billion in tax revenue.

Thai government spokesman Thanakorn Wangboonkongchana was quoted as saying that one of the major measures is the introduction of a long-term resident visa, where a number of privileges are given, such as an exemption of 90-day reports to its immigration office. There are also some amendments to related laws or regulations, such as land ownership and exemption from foreign income tax.

The move comes on the heels of Malaysia’s own overhaul of its Malaysia My Second Home (MM2H) programme, which has been criticised by many for being too stringent. According to Malaysia My Second Home Consultants Association (MM2HCA) president Anthony Liew, the revised terms have made the soon-to-be-reactivated MM2H programme less attractive than similar programmes in Thailand and the Philippines.

For comparison, Thailand currently has a residence programme called the Elite Residence programme, which offers foreign applicants seven options, each with varying validity periods, benefits and costs. One of the most popular options is the Elite Easy Access. Similar to the new rules under MM2H, the Elite Easy Access has a validity of five years and is renewable for another five years. However, there is no minimum stay requirement unlike MM2H, where applicants now have to reside in Malaysia for at least 90 days in a year.

There is no income requirement to hold the Thai Elite Visa. The applicant only needs to pay a membership fee, which ranges from THB600,000 to THB2 million, depending on the membership package applied for.

In comparison, the fee for a MM2H Pass will be increased from RM90 to RM500 for each year of the duration of the pass. A processing fee of RM5,000 will be imposed on the principal applicant and RM2,500 for each dependent. Previously, no processing fee was charged.

There is also no age limit under this programme apart from the Elite Ultimate Privilege (Grand Package), which requires the applicant to be at least 20 years old.

Malaysia’s new financial conditions appear to be comparatively higher. An MM2H participant must now have a minimum offshore income of RM40,000 per month, a minimum fixed deposit of RM1 million and must prove that he or she has liquid assets of RM1.5 million.

“While the intention of having high-quality investors here is good, the new threshold appears to be too steep, which may make Malaysia not so attractive compared with other countries. And other Asean countries like Thailand have a lot of things to offer such as culture, places of interest such as beaches, and a vibrant nightlife,” says Lee Heng Guie, executive director of the Socio-Economic Research Centre.

“The biggest concern is whether these new requirements will also be backdated. It should only apply to new MM2H applicants and not the existing ones,” he adds.

Apart from Malaysia and Thailand, another country that will be making changes to its residency-by-investment programme for non-EU citizens is Portugal, which aims to drive investment towards the country’s low-density population areas, relieving pressure on higher-density areas such as Lisbon, Oporto and the Algarve.

The Portugal Golden Visa programme has long been a popular choice with expatriates as it allows people to apply for permanent residency and citizenship after five years through investing in real estate. But come Jan 1, 2022, individuals will need to invest a minimum of €500,000 (RM2.45 million) in real estate.

However, individuals need only invest €350,000 in a property that is at least 30 years old, which will be refurbished, or €280,000 if that same property is also located in a low-density area.

Datuk Seri Dr Victor Wee Eng Lye, an economist and professor at the School of Hospitality, Tourism and Events at Taylor’s University, believes that once the financial conditions of the MM2H programme rise to a higher threshold, the income profile and preferences of the retirees would change.

“Malaysia will be competing directly with more expensive retirement destinations such as Italy, Greece or Spain if the retirees prefer the Mediterranean climate or Mauritius for a tropical island environment. Spain provides good weather with no restrictions apart from health insurance and proof of an income or pension,” he tells The Edge.

Existing Malaysia My Second Home (MM2H) visa holders are awaiting details and clarification on the status of their visa. Whether they meet the new criteria set by the Malaysian government is at the top of their minds. Will they be able to stay in Malaysia for the remaining duration of their current visa? If not, how much time will they be given to leave the country?

On Sept 13, Home Minister Datuk Seri Hamzah Zainudin announced that the new higher financial requirements will apply to all new applicants beginning October, while any reviews and/or waivers for existing participants will be considered on a case-by-case basis.

Pending the details, these MM2H residents who consider Malaysia as their only home — some purchased their property expecting to live here for decades — are thinking of ways to continue staying in Malaysia should they fail to comply with the new requirements.

A participant from the UK, who declined to be named, tells The Edge that the reason he and some of his friends chose to retire in Malaysia was to get away from the cold winter.

With their status remaining in limbo, they are making plans with other MM2H friends from Australia to take turns to stay at the same property during the winter season in their respective countries. The MM2H resident says that since UK citizens are granted a 90-day visa, they plan to come here for 90 days, then travel a bit and return for another 90 days.

Another solution, he says, is for those with local partners to get married and obtain the spouse visa.

These appear to be clever solutions, especially if they already own an asset and hope to dispose of the asset when prices are better. It could also work for rented units since they plan to stay for up to six months.

How many MM2H residents own property in Malaysia and how many rent? According to a survey conducted by the Malaysia My Second Home Consultants Association (MM2HCA), 55% of the MM2H participants have purchased a property here while another 25% are renting their accommodation. Of the total who own a property here, 27% bought properties valued at above RM1 million. The majority (25.8%) of the participants live in Kuala Lumpur, followed by 20.3% in Penang and 17.2% in Johor.

As MM2H residents form just a small number of the country’s population, should their contributions be ignored?

Siva Shanker, CEO of real estate agency Rahim & Co, says contributions from MM2H participants may be too insignificant to make a serious impact on the property market. “(However), since everything can add up, every small sum does make a difference. Especially now, when the property market is slow, it would make a significant difference,” he tells The Edge.

“We need to avoid a massive exodus of people just because they are unable to top up the funds based on the new criteria. It would be unfortunate if they had to put their property up for sale now when the market is very depressed. The rental market is also currently depressed,” he adds. Siva is of the view that the new financial conditions under the revamped programme should not apply to existing participants. “By changing your goal post all the time, you are forcing people to have no confidence in you. It would be like saying you can play badminton with a racket, then midway you tell them they can no longer use the racket but that they would instead have to use their feet like when playing sepak takraw.”

ExaStrata Solutions Sdn Bhd CEO and chief real estate consultant Adzman Shah Mohd Ariffin points out that the MM2H purchasers form a profile of customers who have a positive impact not only on the real estate market but also the economy.

“These purchasers will normally bring foreign capital into the country to buy property and engage locals to provide related services,” he says.

Adzman adds that some may also open businesses in Malaysia and invest further domestically, providing work and spending that can help the local economy. “They may even purchase more properties for investment. The spillover effects are what is important.”

There is a new breed of retirees emerging and they are seeking a suitable haven to retire on their cryptocurrency investments and gains. Portugal, which has announced that it is tightening the Golden Visa rules from 2022, has been identified as one of the world’s most crypto-friendly countries as buying and selling of cryptocurrency is tax-free. Portugal has taken it a step further and will allow the use of Bitcoin, Ethereum, Cardano and Dogecoin to purchase luxury condominiums.

Closer to home, Vietnam, which was named the 10th best place to retire in a 2021 survey by InternationaLiving.com (Portugal came in fifth and Malaysia seventh prior to the announcement of the new rules), holds the top spot in the Global Crypto Adoption Index, which ranks 154 countries, in terms of crypto activity, trading activity of non-professional users and peer-to-peer exchange trade volume.

It would be interesting to watch which countries will take the lead in attracting the new crypto billionaires — which according to Forbes includes the likes of Winklevoss twins, known for their investments in Bitcoin; MicroStrategy CEO Micheal Saylor; and crypto exchange Binance CEO Changpeng Zhao — to their shores.