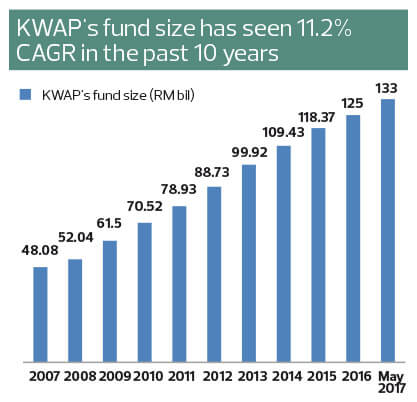 A civil service pay hike is probably bittersweet to Datuk Wan Kamaruzaman Wan Ahmad, CEO of Retirement Fund Inc (KWAP), tasked with growing the fund meant to take over the government’s burgeoning pension liabilities. Every salary increment could negate what little progress KWAP has made in the past 10 years to narrow the gap between its fund size and the government’s RM300 billion-plus pension liability.

“The truth is that there are gaps that need to be addressed. Overall, based on the latest review this year, the [pension liability] gap remains. We caught up, but … we’re back to square one,” Wan Kamaruzaman tells The Edge, without revealing the exact size of the gap or impact of the recent civil service salary review to at least RM1,200 a month.

That is not to say he is unhappy about the salary increase; rather, it is an admission of the fund’s mammoth task and the need to tackle a growing public sector pension liability.

“Obviously, we need to grow faster, but there are limitations. It is up to the government. We [can only] do our best to protect the principal plus make as much returns as possible [considering] our risk appetite,” he says. “A one-off funding or higher contribution would be good, but these are policy matters.”

In 2015, the federal contribution to KWAP fell to RM500 million compared with RM1.5 billion between 2011 and 2014. KWAP’s 2016 annual report was still pending parliamentary approval at the time of writing.

Sensing public criticism, Wan Kamaruzaman defends the government’s present handling of the situation, noting that it is still giving and has not taken any money from KWAP thus far: “The government is carrying two burdens right now: contribute to KWAP while also paying pensions and liabilities. So the burden is very, very high. With commodity prices not doing well, I think the government is really in a situation where it cannot give much more than what it’s already giving to KWAP.”

Without a sizeable cash injection, KWAP has little hope of bridging the gap in this lifetime as the fund’s need to preserve capital means it cannot take on risky investments that may net much higher returns (or losses).

Already, KWAP is moving to slightly riskier investments such as real estate development to compensate for smaller returns in its traditional fixed income space. (See sidebar)

“We know there is a liability shortfall, but the truth is that everyone has their own KPIs … deals are transparent and above board. There is no such thing as a left pocket, right pocket deal [with the government]. We compete with the rest to buy these [real estate] assets. We don’t get favours and that’s the reality and we are okay with that,” Wan Kamaruzaman replies when asked about potential asset injections from the government to grow its fund size.

As it is, KWAP’s fund size will run out within seven years if it takes on the governments’ annual pension liability from 2021, simple calculations show. That’s based on the 11.2% compound annual growth rate (CAGR) its fund size saw to RM125 billion last year from RM48.08 billion in 2007, which should see KWAP’s fund size reach RM210 billion by 2021. It also assumes KWAP’s fund size will continue to grow 10% a year thereafter.

Moving the pension burden to KWAP would free up fiscal space for other development spending and safety nets, including subsidised public healthcare for aged citizens who were private sector wage earners.

But a premature drawdown of KWAP funds without a sustainable plan will only kick the bucket down the road as pension obligations will only snowball faster if nothing is done.

Wan Kamaruzaman says there are about 28,000 new civil service pensioners every year, a number that falls to 15,000 after attrition (death) rate. Notably, spouses and dependents below 18 of deceased civil servants are also entitled to pension.

The obvious solution would be to reform the defined benefit public pension system into an EPF-like defined contribution scheme — a politically unpopular and basically suicidal move.

“At the moment, [the goal] is to maintain the gap. But ultimately, the government has to come up with certain solutions. Ultimately, the trend is to move to a defined contribution scheme. But this is the decision of the government. [It] has to make those tough decisions. We can only advise the government,” says Wan Kamaruzaman, adding that the current pension liability gap can be maintained if KWAP grows at an average of 10% a year, all else being equal.

Still, he downplays talk of pensions being a time bomb and expounds the services that are in store for pensioners such as the MyPesara app that is set to go live in July.

“It is not as alarming; there is always a solution. At the highest level, there is always discussion going on, I assure you. The government is not saying ‘it is not my problem’. But a decision has not arrived,” he says.

Previous discussions included KWAP taking over the liability of pensioners who joined the civil service after 1991 (the year KWAP was formed), which would see additional liabilities being taken on every year, he reveals.

“We would never be able to undertake the entire pension liability, but there is a formula, a workable solution [with retirees coming in batches under KWAP] as our fund size grows. That would relieve the government of some liability and allow more money to be given to KWAP in its annual budget,” he says.

For now, a lot of work is being done to create a sustainable and profitable business out of taking care of pensioners at a reasonable cost that can be financed directly out of their pensions, he adds. Among other things, KWAP — which took over the task of dispensing pension payments to retired civil servants in late 2015 — is finalising its plans to build and own retirement homes, something that may see the forming of another special purpose vehicle, just like the one for real estate development.

“The stakes are very high. We have 1.6 million civil servants, over 700,000 pensioners; we cannot afford to slack off,” he says.

The KWAP CEO, along with the rest of us, can only hope that the government will arrive at a concrete solution to address the growing public pension burden and not have one forced upon it due to lack of funds.