Cover Story: The evolution of the flexible workspace 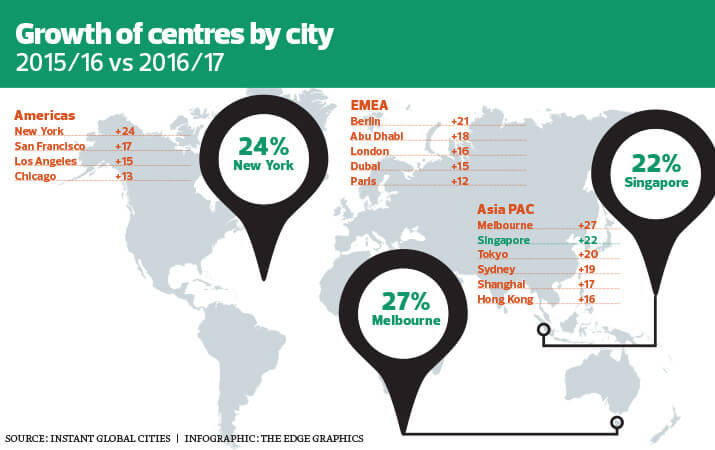 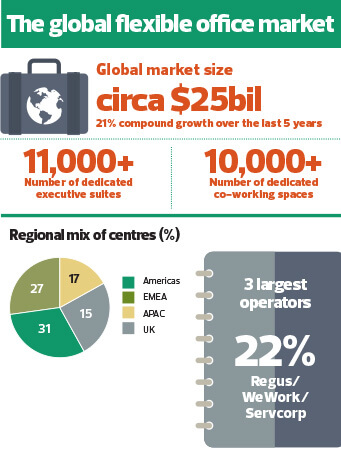 By now, the flexible workspace is not a foreign concept in Malaysia. In fact, it is no longer considered a disruptor or a complementary subsector of the office market, according to Colliers’ The Flexible Workspace Outlook Report 2018, Asia-Pacific.

“It is a fundamental part of the commercial real estate market and a sector in its own right, growing in size and importance to landlords and occupiers. The average flexible workspace leasing term is now over 24 months, up from 12 months in 2013, demonstrating that it is now competition to traditional office space.

“We have seen continued growth in the sector and across some major markets, the take-up from flexible workspace operators accounted for 40% of the overall market in 2017. This growth has been fuelled by the thrust or flexibility from multinational corporations, evidenced by the percentage of deals for 15 desks or more increasing to 48% in 2017 from 32% in 2016, which, in turn, was up from 12% in 2014,” says Colliers.

A similar trend has been observed in Malaysia. Instant Group, an independent global flexible workspace specialist, puts the number of centres in Kuala Lumpur at 104 as at December 2017. The market grew 28% from 2015 to 2017.

“The prices for flexible space can range from over RM2,200 to RM245 per month depending on the requirements and area. Coworking is popular within Kuala Lumpur and over 25% of the centres offer some form of coworking option in the city,” says Instant Group.

While flexible workspaces have seen a surge in popularity in recent years, the concept is hardly new.

“The flexible workspace is an evolution from the days of serviced offices, which were then serving potential business set-ups that wanted to prospect the market before taking long-term commitments in office buildings. Today’s shared economy has resulted in a more attractive shared space that comes complete with lifestyle facilities,” says Savills Malaysia deputy executive chairman Allan Soo.Colliers notes that the flexible workspace is a 40 year old industry that has repositioned itself.

“It has shaken off the drab aesthetics of the serviced office to become a hotbed of creativity and productivity characterised by compelling design — with data increasingly being used to make design more efficient, boosting end-user productivity,” says Colliers.

“Staff may choose to work from a flexible workspace close to home for a number of days per week rather than commute to the city. Secondly, small businesses and startups may choose this kind of accommodation until they are established.

“Thirdly, large corporations in the future may plan to have one principal office and accommodate remaining staff in flexible workspaces that can be varied in size according to their requirements. One of the problems of leasing for a three-year term is that a tenant company may anticipate needing more space or even downsizing within that term, but the landlord can’t give them that flexibility,” says Boyd.

A flexible workspace also benefits the landlords as operators may rent sizeable areas in their buildings, he adds.

“Some of the end-users may eventually take permanent space in the same building. Moreover, prospective tenants may be attracted to the added confidence of having additional overflow space available if needed.”

It is no secret that technology and globalisation have completely changed the workplace.  Technology has enabled people to work from anywhere, blurring the lines between working hours and personal time.

Savills notes that there has been a considerable increase in the number of businesses offering flexible working hours in the past year. Research published by Vodafone shows that three in four companies worldwide now provide staff with the option to vary their hours and work from home.

A recent HSBC research showed that 89% of those surveyed said flexible working is the No 1 motivator to boost productivity, while 77% citied financial incentives.

According to Forbes, by 2025, millennials will account for 75% of the global workforce and will greatly impact the workspace concept.

The expectations of millennials are different from those of other generations. They prefer collaborative work and value an open layout and flexible schedules, as well as work-life balance.Millennials, being digital natives, are part of the driving force for more technology.

A new Dell and Intel study has found that almost half of millennials are willing to quit their jobs if a company’s office technology is not up to their standard. More than 80% said workplace tech would have an influence when deciding to take a job. Savills and the British Council for Offices found a similar sentiment across the pond in their What Workers Want 2016 report.

The flexible workspace is becoming a competitive industry. Colliers describes it as a low-margin, low-volume business with low barriers to entry and because of this, operators need to develop stickiness in order to retain strong occupancy levels and drive profitability.

“Bigger operators with a larger end-user base may be able to vertically integrate more efficiently and drive higher margins by creating more transactions per end-user, which generates direct revenue and creates an environment where end-users stay for a longer term,” it says.

Wellness is a hot new addition to the industry. Shanghai-based operator naked Hub has a swimming pool at its latest Beijing location and offers regular yoga classes to its end-users across all locations.

“Singapore operator The Working Capitol goes one step further in its Robison Road location which, in addition to a pool, has a variety of food and beverage outlets and a gym. New York flexible workspace heavyweight WeWork has added a gym concept to its armoury, which is expected to be rolled out in Asia-Pacific over the next 24 months,” says Colliers. It believes that a curated, holistic offering should have ready demand given that most people these days work beyond the traditional working hours.

“A more comprehensive offering can help capture the organic demand created and operators who introduce lifestyle elements to support their end-users with a more enjoyable work-life balance can benefit,” notes Colliers.

An example is The Working Capitol. Co-founder Ben Gattie says the company has created an environment that takes its members through their day and enables it to maximise the return on its real estate through a variety of complimentary offerings.

“We feel this level of increased vertical integration is essential for our members and it, in turn, helps us to drive maximum value as this ultimately translates into strong retention,” he says.

Meanwhile, naked Hub has spun off a new non-physical revenue stream offering a “community as a service” tool to portfolio landlords.

“Landlords need to be able to create communities in their buildings as space is only one aspect of what occupiers want. Our experience of running flexible workspace locations has enabled us to think about how to take a community vertically through a building or portfolio, rather than a handful of floors, and we believe this technology will change the corporate real estate world,” says naked Hub CEO Jonathan Seliger.

The technology will allow workers in a building to meet and collaborate as well as book meeting rooms and access facilities. It can also be embedded into building systems already in place to integrate with turnstiles, door locks and meeting room access, reports Colliers.

“Building owners can use the data generated to track individuals and companies and monetise facilities provided by charging for services such as meeting rooms, using the cryptocurrency provided by naked Hub,” says Seliger.

The usage of space within flexible workspace locations is also changing as desk count per deal becomes larger.

“As such, we are seeing an increase in the level of customisation to capture growing demand, with multinational corporations, in some cases, taking whole floors or even whole locations,” says Colliers.

WeWork managing director Christian Lee says in an interview with Colliers that large enterprises have become WeWork’s fastest-growing member segment and now represent more than 20% of its overall membership.

“Today, more than 10% of Fortune 500 companies are WeWork members . We are also seeing that once these companies become members, they grow with us. Year over year, the number of individual members representing enterprise companies has increased 370%,” he says.

In Colliers’ survey of Asia’s top 200 occupiers, 56% said they were already using flexible workspace in some capacity and 91% were considering using it.

Cushman & Wakefield, in its Coworking 2018 report, forecasts that flexible workspaces will account for 15% of the total office supply in Southeast Asia by 2030, with the key cities of Hong Kong, Singapore and Shanghai earmarked for growth.

“Local and regional operators dominate the Asia market but global companies are also showing interest. WeWork recently acquired Spacemob in Singapore — its first acquisition in Asia — while Spaces is present in 10 countries across the region.

“This international competition is leading to a number of regional mergers and acquisitions to provide regional scale. For example, Shanghai-based naked Hub has merged with Singapore’s JustCo to create the largest premium coworking space operator in Asia,” says Cushman & Wakefield.

JLL in its Global Market Perspective February 2018 report says that flexible workspace has grown at a rate of 200% over the past five years. In global cities such as London and New York, it is expanding at a rate fo 20% per annum.

“Demand for flex space is projected to grow as corporates and large enterprises are looking more and more to enlarge the flexible proportion of their portfolios to benefit from a range of the advantages that such flexibility can bring. A rising share of enterprise users is likely to continue to underpin the demand for flexible workspace over 2018 and beyond,” says JLL.

Colliers expects the demand for flexible workspaces to be boosted by a recent change in accounting regulations. The Financial Accounting Standards Board (FASB) and International Accounting Standard Board (IASB) will require businesses to disclose lease obligations for real estate and other major assets directly on balance sheets by 2019, adding more than US$2 trillion of debt to company balance sheets.

“Being obliged to disclose real estate lease obligations will increase the visibility of a company’s real estate strategy and put increased pressure on corporate real estate leads to ensure portfolio performance is optimised. This will play into how space is being used and should have a positive impact on the flexible workspace sector, pushing MNCs to take less core space on traditional long-term leases and rely on flexible workspace operators to provide the flexible space to deal with temporary headcount swings,” says Colliers.

“Occupiers will also rely on either a landlord or an operator to provide access to amenity spaces such as meeting rooms, training facilities and breakout spaces, rather than sitting on inefficient or unused space, which will now be accountable. Short-term agreements for flexible space and memberships for use of amenities will typically sit outside the FASB and IASB obligations,” says Colliers.

However, Colliers does not believe long-term agreements with flexible workspace operators can circumvent the new regulations.

“An MNC taking on a three-year deal for customised space within a flexible workspace location is unlikely to be able to pass this off as a membership and, therefore, this will still need to be accounted for,” the firm says.

Meanwhile, the demand for a more technology-driven workspace by millennials has seen many companies start adapting to such requests.

“Even within traditional spaces, organisations are looking to provide more flexibility by moving away from individual private areas and moving towards unassigned seating. One example is Deloitte’s new Toronto office, where even the CEO doesn’t have an office,” says Chargespot in its story, “The future of  work: Technology, flexibility and the choice for a better experience”.

Collaborative space makes up 65% of Deloitte’s new Toronto office, compared to only 15% at its former location, where the remaining 85% comprised individual workstations, says Chargespot. 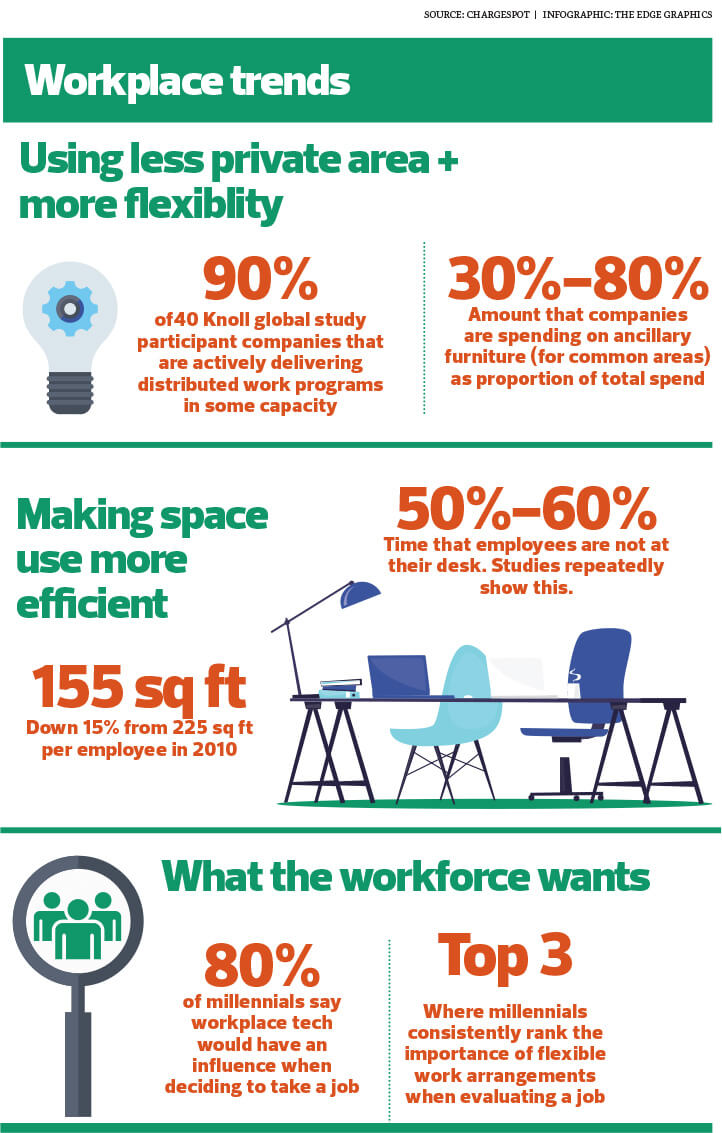