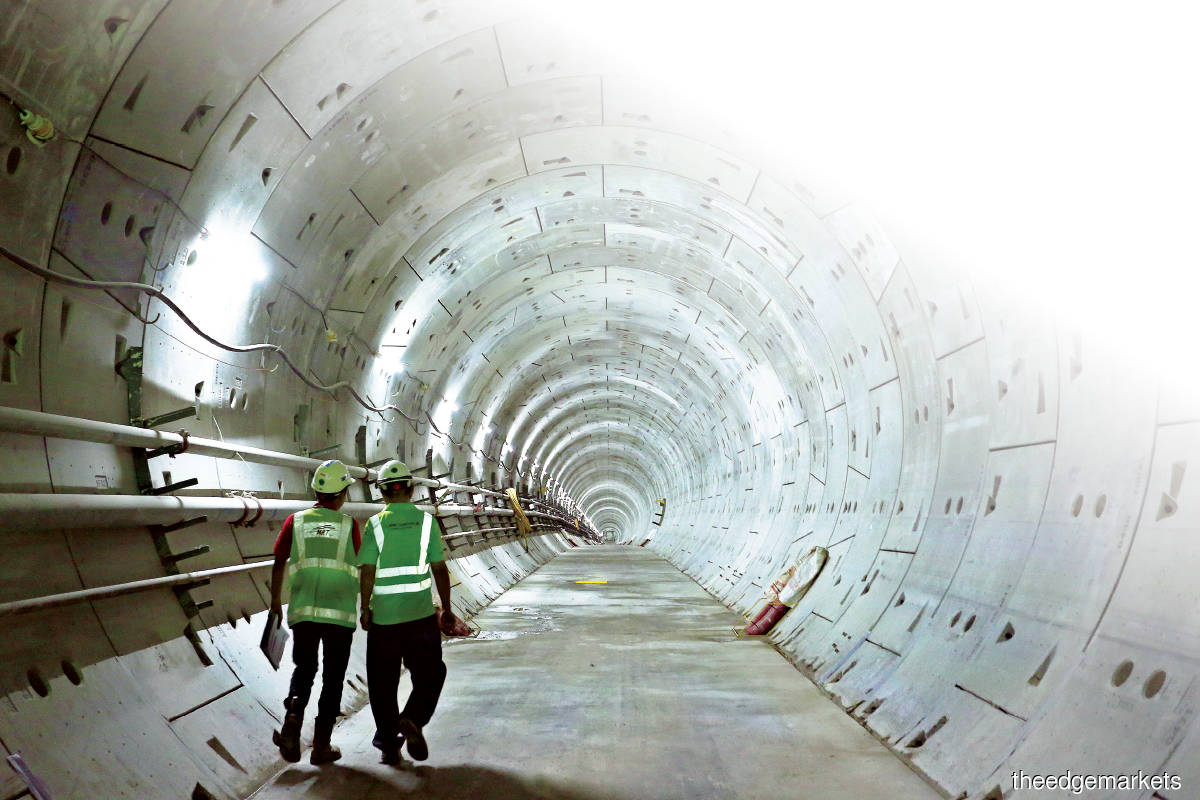 FROM being the fastest growing sector a decade ago, chalking up a year-on-year growth of 18.1%, the construction industry has suffered a change of fortune in the last two years.

Apart from the pandemic, the slower growth comes amid a standstill in infrastructure job flows on the back of reduced public sector spending brought on by fiscal constraints faced by three consecutive Malaysian governments since 2018.

Two weeks ago, the Bursa Malaysia Construction Index fell to 145.68 points — its lowest since the lockdown days of April 2020 — and was down 22.4% from its post-pandemic high in April 2021. Technically, when an index drops more than 20%, it is said to be kicking off a long-term bearish phase.

Is this really the case for the Malaysian construction sector? Or is it the beginning of the end of the bearish sentiment surrounding it?

When asked whether there would be an indication of when the government may decide to roll out mega infrastructure projects that could serve as a catalyst for the construction sector, Senior Minister (Works) Datuk Seri Fadillah Yusof pointed to a cabinet meeting that has been slated to take place.

In a brief WhatsApp message to The Edge, Fadillah, who represents a powerful political bloc from Sarawak, states that it “depends on the outcome of Cabinet away day on Feb 5”.

The two most talked about mega infrastructure projects expected to serve as catalysts to kick-start the construction industry are the Mass Rapid Transit Circle Line (MRT3) and the Sabah portion of the Pan Borneo Highway.

MRT Corp, which handles the MRT projects, had alluded to the possibility of tendering out contracts for the 50km MRT3 by August 2021. But a change in government in the third quarter of last year led to delays, including a cabinet decision on the possibility of it being done based on a public-private financing model.

As for the Sabah portion of the Pan Borneo Highway, progress has been painfully slow when compared with the implementation of the project in Sarawak.

The two projects notwithstanding, Fadilah says RM25 billion has been allocated under Budget 2022 for maintenance works and the continuation of existing infrastructure projects.

“It will provide project opportunities for all contractor categories, big or small, from Grade G1 to G7. Infrastructure will be a key area of support when the immediate Covid-19 crisis dissipates,” he adds.

Ongoing developments under the 12th Malaysia Plan include eight highway projects (four of which are in the Klang Valley), five railway projects and a hydroelectric dam project in Baleh, Sarawak.

However, industry players say the projects — many of which had been announced previously and got off the ground — are not enough to lift the construction sector out of the doldrums.

When contacted by The Edge, Master Builders Association Malaysia president Tan Sri Sufri Mhd Zin highlighted that allocation for the national infrastructure projects under Budget 2022 amounted to only

RM3.5 billion, including the Pan Borneo Highway and Central Spine Road. Another RM2.9 billion has been set aside for the continuation of small and mid-sized projects for G1 to G4 contractors.

“It would raise morale and the hopes of industry players if projects such as the high-speed rail (HSR) can be revisited, the MRT3 to be rolled out as soon as possible or some new major projects can be injected to pump-prime the construction industry in 2022 and beyond,” says Sufri, who is managing director of construction outfit TRC Synergy Bhd.

In the letter sighted by The Edge, the group of contractors are seeking to maintain the status quo in terms of the participants for the MRT3 project as they have already invested in equipment such as tunnel boring machines and segmental box girder launchers. They cited the risks of talent loss should the MRT3 project fail to materialise and idle equipment.

An industry executive says it is easy to fathom why the local construction players want a restricted tender. “By undertaking the MRT3 job via limited tender, it leaves more opportunities for the local players. By convention, if you do an open tender, especially government tenders, you cannot stop foreign players from participating.”

Indeed, some mega infrastructure projects in the country have been dominated by Chinese contractors, which opted for talent and resources from China to execute the job. One example is the RM50.27 billion East Coast Rail Link (ECRL) project, led by China Communications Construction Co (CCCC), which has had a negligible multiplier effect on the local construction industry.

Under the PDP model, MMC-Gamuda does not bear the financial risk. The PDP’s task is to deliver the project in time and within costs and in return for a handsome fee. In the case of MRT, Gamuda was also allowed to tender for the tunnelling jobs. As for the turnkey contractor model, which was adopted by the Pakatan Harapan government, the main contractor undertakes the financial risk. It does not receive any fees but gets a profit from managing the project.

Apart from MMC-Gamuda, there are other contenders for the MRT3 job. They include IJM Corp Bhd, which has the financial muscle and execution strength, and Malaysian Resources Corp Bhd, which was involved in the MRT2 project and was the turnkey contractor for the LRT Shah Alam Line (LRT3).

There is also the question of the time frame for the completion of the MRT3 project. Recall that MRT Corp CEO Datuk Mohd Zarif Hashim said in April 2021 that the rail project would take up to 10 years to complete, from seven years indicated previously.

Instead, the industry executive suggests that it could be completed in just six years. The view is that experienced contractors could deliver the project in a shorter time, and that a shorter turnaround time also benefits the contractors involved.

However, the downside to a shorter construction period is that the government, or MRT Corp, would have to take over and start paying for the project earlier, says an industry official. “Moreover, based on the utilisation rate of MRT1 and MRT2, there is no rush for MRT3.”

To circumvent the fiscal constraints faced by the government, MRT Corp is looking at a hybrid model for MRT3, which would require lead contractors to provide funding of up to 30%.

Latest industry estimates of MRT3’s price tag stand at more than RM30 billion. The Pakatan Harapan administration estimated that the project would cost RM50 billion, as opposed to RM45 billion when it was first announced during the Barisan Nasional days. Push is on for Pan Borneo project

While MRT3 is a priority for the Klang Valley, construction players and politicians in Sabah want the Pan Borneo project to be prioritised or before the federal government extends its balance sheet on another mega project.

To recap, the PDP model executed by Borneo Highway PDP Sdn Bhd, which was given the mandate to develop the Sabah portion of the highway, was terminated in 2019. The state government now handles the project delivery.

Commencing in 2015, the Sabah portion of the Pan Borneo Highway has seen 62% completion across 12 out of its 35 packages for the RM15 billion Phase 1, translating into just 21.2% completion across the entire Phase 1 as at November 2021. For comparison, Phase 1 of the Sarawak portion, worth RM16 billion, was 80% finished in November last year, with full completion slated for 2023.

Considering the political equation at the federal government level, the push for the Sabah portion of the Pan Borneo Highway cannot be taken lightly.

What else is being done

On top of the dearth of new contract awards, the impact of the pandemic still lingers beyond the RM42 billion in losses incurred by the construction industry as at September 2021. This has resulted in two consecutive years of contraction for the industry.

Fadillah acknowledges the issues, which include worker shortages and rising material costs, as well as the challenges in price variation, contract mediation and project delays. “The [Works] ministry has proposed to abolish the existing dispute value limit of RM500,000 for mediation under the Covid-19 Mediation Centre (PMC-19) in order to benefit the parties involved in the construction sector,” he says.

Other proposals being considered to speed up the recovery of the industry include expediting the value engineering and value management (VE/VM) facilitation services for public construction projects, and for the administration to potentially carve out certain government concessions, he adds. Further, the variation of price (VOP) facility for work projects has been extended until June 30 this year.

However, from MBAM’s perspective, more could be done. “There are problems of cost that are not being shared by the contracting parties, such as the cost of sanitisation, PPE and Covid-19 mitigation during the various Movement Control Order periods,” says Sufri.

“Act 829 (Temporary Measures to Reduce the Impact of Coronavirus Disease 2019 Act) has to be further amended in terms of the treatment of extension of time and cost sharing, and not just extended, so as to provide the protection that the industry needs. Construction companies have no choice but to absorb the high prices that were not provided for in their contracts,” he points out.

“Even though the government has provided price fluctuation clauses in its contracts, the pricing used by the Department of Statistics Malaysia does not reflect the actual increase. Furthermore, the price variation clauses do not extend to private sector contracts.”

Although the number of jobs is at record levels, the value of contracts has been reduced.

The number of construction-related projects in the country reached a record high of 16,589 in 3Q2021, but the value of work done during the quarter declined to RM24.77 billion — the lowest since 4Q2013. Similarly, total work done in 9M2021, worth RM84.35 billion, was the lowest in eight years.

Additionally, half of the construction activity in 9M2021 comprised building construction, which industry watchers say has tighter margins. This is opposed to infrastructure projects such as roads and railways, which made up a quarter of the activities in the same period.