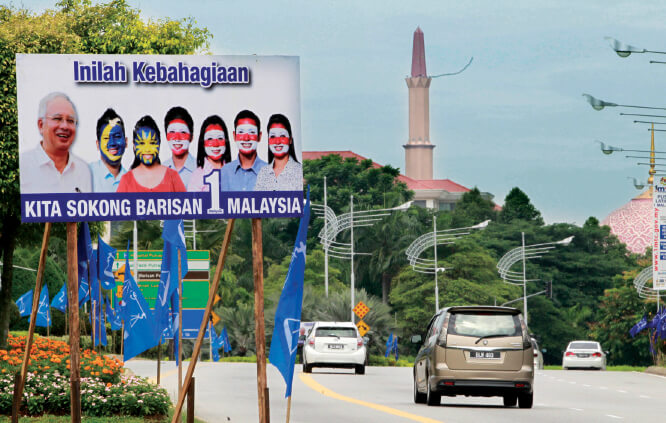 With the coming GE14, politically related stocks have gained favour with investors

WITH the 14th general election around the corner, some counters seem to be drawing more interest and performing better than others. There is nothing unusual about this as it had happened in the run-up to past elections.

These are stocks that are perceived to have a political flavour or have the potential to benefit from a good performance at the ballot box by the incumbents.

But without actual newsflow or a tangible improvement in earnings, the lofty pre-election valuations of such stocks tend to struggle after the ballots are cast. Once the hype passes, investors may come to realise that the rally was not supported by the companies’ fundamentals, and gradually their share prices come down.

The stock continued its downward trend until the end of 2008, losing 37.2% of its market value along the way.

Utusan’s largest shareholder is Umno, the biggest component party of Barisan Nasional, with a 49.77% stake. The group’s publications are the mouthpieces of the ruling coalition, especially in Peninsular Malaysia.

The pre-election rally also occurred this time round for Utusan. Between March 7 and April 27, its share price jumped 78% to its peak this year at 68.5 sen. The stock retracted by 42.3% to 39.5 sen last Friday.

However, it cannot be said that all stocks that experienced a rally before an election fall after the polls. The fate of the company’s share price, whether it falls or soars, depends on the outcome of the election and the government’s policies.

As BN — led for the first time by Prime Minister Datuk Seri Najib Razak — was returned with a mandate to continue governing the country, albeit with a smaller majority, Petra Energy’s share price continued to rise, reaching RM2.19 on July 18, 2013. The stock peaked at RM2.73 on June 19, 2014. The group’s largest shareholder is Tan Sri Bustari Yusuf with a 27.54% stake, followed by Wah Seong Corp Bhd (26.97%).

The sustainable run of Petra Energy’s share price between March 2013 and June 2014 was because of big-ticket contracts, including the hook-up, commissioning and topside major maintenance services (2013-2018) awarded by Petronas Carigali Sdn Bhd.

While it could be good for investors to follow politically related stocks in the run-up to a general election to ride the rally — there is money to be made — they should remain vigilant and keep one eye on the exit.