Counters down on illegal schemes seepage 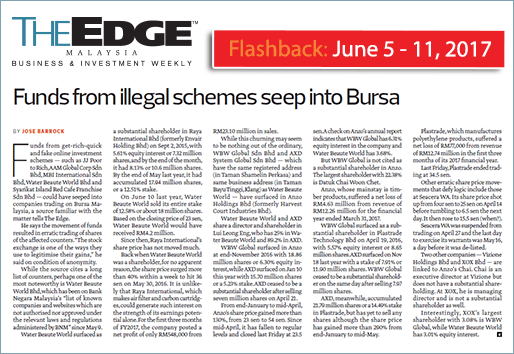 KUALA LUMPUR (June 5): Shares in Anzo Holdings Bhd and Plastrade Technology Bhd were hit today following a report that the counters may have been the subject of funds from get-rich-quick and fake online investment schemes.

The Edge weekly in its latest edition reported that funds from such illegal schemes may have possibly seeped into companies trading on the stock market. Among the non-listed companies involved are Water Beaute World Bhd, which had surfaced as a substantial shareholder in Raya International Bhd last year, WBW Global Sdn Bhd and AXD System Global Sdn Bhd. Both WBW Global and AXD share registered and business addresses with Water Beaute World.

However, Vizione Holdings Bhd, which is linked to Anzo via Datuk Chai Woon Chet, saw a spike in its share price.

Raya International Bhd and XOX Bhd, which were also mentioned in the article, were pushed up slightly in morning trades before falling back to their opening prices.

Raya International saw its share price rise 0.5 sen to 23.5 sen in early trade before falling back to 23 sen per share.

All the counters mentioned had hit one-year highs at some point between April and May this year except Raya International, which hit an eleven-month high two weeks ago, and XOX, which was at a seven-month high at the beginning of May.

Meanwhile, Yong Tai Bhd denied that SV International (SVI), a local multi-level marketing company with a strong foothold in China, was a major shareholder in the group, and that it does not have any share in its Impression City and Impression Melaka projects.

"As to date, Yong Tai has not entered into any joint venture agreement or done any business transaction with SVI for its property developments," the group said in a press statement today.

Yong Tai said it would not hesitate to take legal action against companies that uses its name or the property development projects under its banner in a way that may mislead the public about their affiliation with Yong Tai.

SVI has reportedly said it is interested in buying Yong Tai's properties and shares, and had initiated a signing ceremony event as a marketing gimmick.

Shares in Yong Tai rose as much as 2 sen in early trade before paring gains to trade at its opening price of RM1.46 per share today.