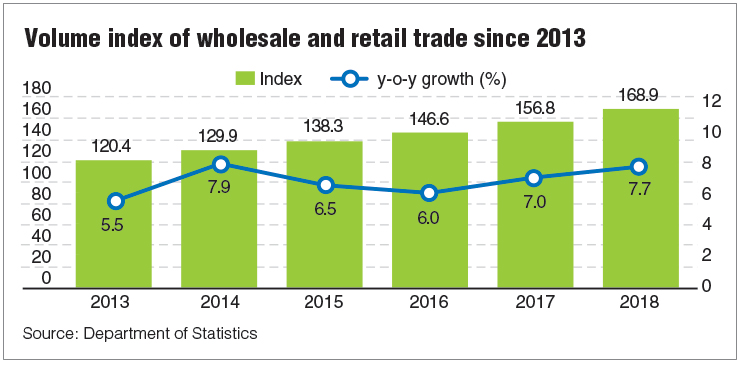 KUALA LUMPUR: While the volume of wholesale and retail trade increased in the fourth quarter of 2018 (4Q2018), this may not be a confirmation of better conditions ahead as economists do not expect private consumption to improve much this year.

The Statistics Department yesterday released the data on the volume index of wholesale and retail trade for 4Q2018, which climbed 8.1% year-on-year (y-o-y) in the quarter.

For 4Q2018, the retail trade sub-sector saw the biggest increase, up 12.7% y-o-y, followed by distributive trade (8%) and wholesale trade (6.7%). Meanwhile, the volume index for motor vehicles fell 1.4% y-o-y after the brisk sale during the tax holidays between June and August.

“The strong momentum in distributive trade will translate into solid growth for private consumption and services sector thus will drive Malaysia’s economy into a good position in 2019,” said MIDF in a note, adding that supportive policies, such as the targeted RON95 petrol subsidy will encourage a steady rise in domestic consumption.

Nonetheless, others are not as optimistic on the outlook of the domestic demand.

An analyst with JF Apex Securities said there may not be a big improvement in private consumption going forward given the uncertain external sentiment, stirred by the concerns on slowing global growth and the trade dispute between the US and China.

“I think domestic demand will still be slower this year compared to 2018. All over the world, the perspective is mostly that global economic growth will be slower, including Malaysia.

“There could be a small improvement but it will not be significant,” the analyst told The Edge Financial Daily.

It said the revision was due to the negative effects of tariff hikes in the US and China, as well as the softer momentum in Europe.

Another economist from a local investment bank said the increase in the wholesale and retail trade index was a surprise, given the weak consumer sentiment index (CSI) and business conditions index (BCI) in 4Q2018 as reported by the Malaysian Institute of Economic Research (MIER) two weeks ago.

“I don’t really follow this particular index but the increase does not fit in with the weak consumer sentiment and business conditions reported by MIER recently. Since the index went up, we can probably expect private consumption to be better in the fourth quarter, when Bank Negara Malaysia announces the economic numbers tomorrow (today),” said the economist.

MIER said the CSI was dragged by sentiments on job and income conditions, while inflationary expectations edged up.

Meanwhile, the BCI was down on the back of declines in sales, production, new local orders, new export orders, capital investment and capacity utilisation.