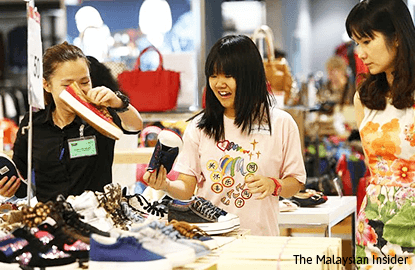 (Nov 5): Consumer confidence levels in Malaysia has worsened in the last quarter, declining 11% to 78 points from the last survey, amid growing worries over the country's economic outlook, a Nielsen research has found.

In a CNBC report, Nielsen said Malaysia's score was the lowest among six Southeast Asian countries surveyed, and was the only one in the region to underperform the global average of 99.

The score was also a record low for Malaysia since the global survey was first initiated in 2005. The other five Southeast Asian countries surveyed were among the world's top 10 optimists, the report said.

"The Nielsen report attributed waning confidence to brewing worries over Malaysia's economic outlook, a near 20% drop in the value of the Malaysian ringgit year-to-date and the spreading of what is being called the country's worst-ever political crisis," CNBC said.

The report said more than 60% of those polled listed concerns about the country's worsening financial conditions, compared to only 43% in the previous survey, while one third of the respondents said political stability was one worrying factor.

"The currency devaluation has potentially impacted the general perception of the country's economic strength. [As] concerns over rising food prices subsided [from the second quarter], political stability is now the second highest concern after recent high-profile demonstrations and as politics [dominates] the media headlines," Richard Hall, country manager of Nielsen Malaysia, told CNBC.

The survey also found that nine out of 10 Malaysians feel that the country is in a state of recession and its second-quarter GDP growth was at its lowest rate since the third quarter of 2013.

This is despite assurances from Prime Minister Datuk Seri Najib Razak that Malaysia is in better shape now than it was during the Asian financial crisis in 1997, and that the country was not facing an economic crisis.

The findings of the Nielsen survey was reflective of a similar survey carried out by the Malaysian Institute of Economic Research that recently said its Consumer Sentiments Index slipped to a six-year low of 71.7%.

This was why, Hall was reported as saying, consumers were "becoming more frugal in view of the increasing cost of living."

Contrary to Malaysia's results, its neighbours – the Philippines, Indonesia, Thailand and Vietnam – remained among the world's top 10 optimists, but Nielsen said there were signs of anxiety in the economy, job security and health areas.

"With the exception of Malaysia, Southeast Asian confidence levels are still tracking along the global average but the past few quarters have seen some tapering which is reflective of the softening in the region's economies," the report was quoted as saying.

"Concerns about the economy, political stability and the increasing cost of living are causing apprehension for consumers in some markets, leading them to pull back on spending."