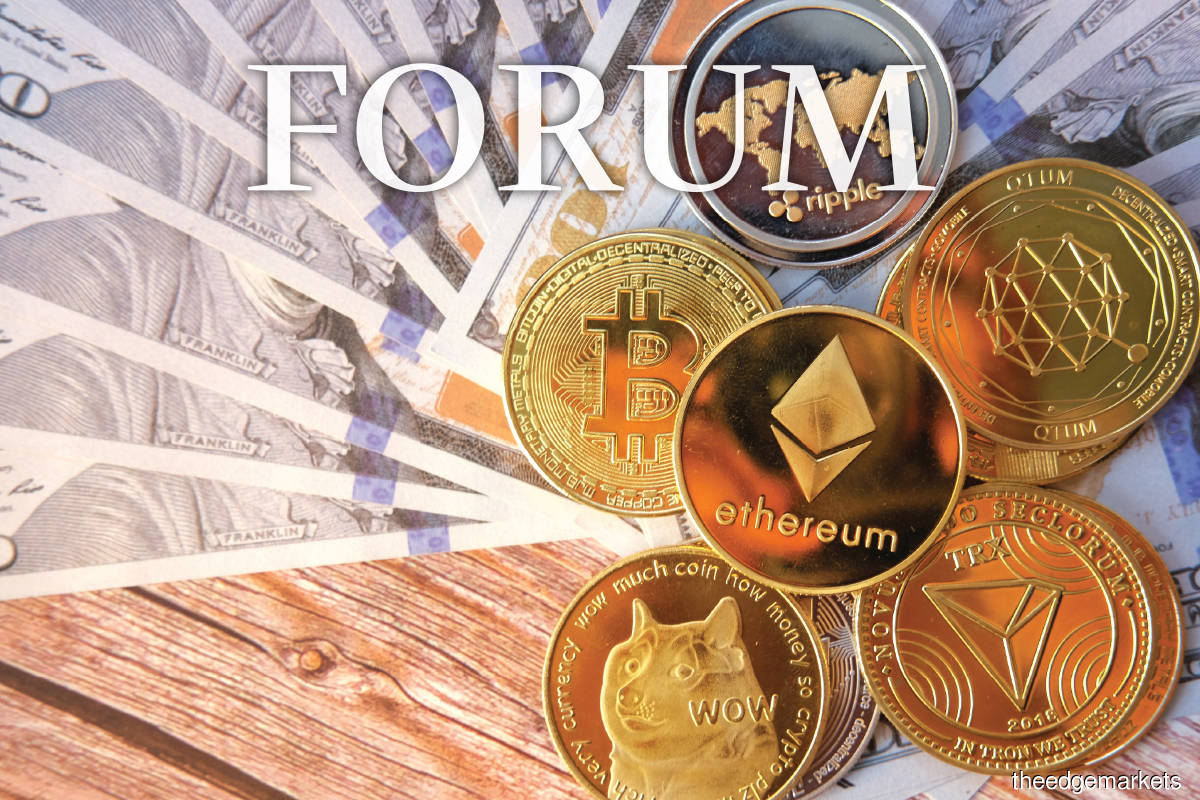 Cryptocurrencies have already reached a market value of over US$2 trillion, and many young millennials use DeFi because they find it convenient

The existing financial system is very centralised, hierarchical and concentrated. The concentration comes from the network effect in which a few hubs dominate the connections to the users (nodes versus links). Metcalfe’s Law says the value of the network increases exponentially with the number of users.

Hence, Google dominates the internet with more than 90% of users using the web search engine, which explains why the company is worth more than US$1.7 trillion (RM7.4 trillion). By comparison, the largest bank in the world has not more than several hundreds of millions of customers, and even though it manages US$5.1 trillion in assets, its market cap is only US$250 billion. However, the banking system is highly concentrated, since the top 30 largest banks account for 62% of total banking assets of US$110 trillion. The stock market is also highly concentrated, with the top two exchanges — NYSE and Nasdaq — accounting for 45% of global market cap.

Why is the current financial system so centralised and hierarchical? Think about the current banking system as a series of pyramids with central banks at the top. When we want to pay someone domestically, we give an instruction (like a cheque or transfer instruction) to our bank to pay the other person (payee). The cheque is passed to the payee’s bank and cleared centrally at the central bank. Central clearing is more efficient than bilateral clearing, since every bank has an account with the central bank.

For global payments, to pay someone in, say, India, we instruct our bank to buy US dollars for ringgit, and the Malaysian bank then instructs its New York correspondent bank to clear US dollars across the books of the Federal Reserve Bank of New York, which then pays the correspondent bank of the Indian bank, which then converts the dollars into rupees and finally pays into the account of the Indian receiver.

In effect, the global banking system is pyramidical, in which ultimately more than 60% of global payments rise up the pyramid to clear in New York using US dollars. In effect, the Fed can see all the dollar transactions, which is why financial sanctions on Russia are so effective.

DeFi uses distributed ledger systems called blockchain technology that is “flat”. Blockchain means that any payment information (such as transfer of cryptocurrency like Bitcoin) will be encrypted into blocks of algorithms that are almost impossible to decipher because the information is passed to another block along the chain, until it is finally opened by the payee. Both the payer and payee do not use any bank (which is why it is flat), so the US or any government theoretically does not know what is going on.

Cryptocurrencies have already reached a market value of over US$2 trillion, and many young millennials use DeFi because they find it convenient. They do not worry about the volatility of the cyber currency because they hold it for payment convenience. Anyway, DeFi also benefits from Metcalfe’s Law, because the more the users, the more the value, which is why Bitcoin and Ethereum have first-mover advantage, accounting for the bulk of market value. There are thousands of other cryptocurrencies trying to gain speed, scale and scope, as the more users, the more value in the currency.

Central bank objection was why Facebook (now called Meta) was unable to launch Libra, the Facebook digital currency that would have immediately 2.5 billion customers.

Since the cat is out of the bag, there is no way that CeFi can stop DeFi from expanding. The question is how and who will be the winner in this game.

Decentralised finance is clearly the way to go, and banks, insurance and asset managers are all deep into blockchain technology, artificial intelligence and Big Data, trying to use mobile apps to reach as many customers as possible.

We need to think through the competition between DeFi and CeFi on both the asset and liability side of the balance sheet. The fight for market dominance on the liability side comes from fiat money (dollars, euros, yen, RMB) versus Bitcoin, Ethereum and so on. This will go on for a while. Think about Great Powers fighting over fiat money, while the barbarians (cyber currencies) are already at the gate.

The asset side of CeFi is basically government or private debt. The anchor asset used to be gold or physical assets. Governments realised that issuance of money can allow them to get real resources (gold, silver and real commodities, including labour). Seeing this, commercial banks leveraged off the system to issue bank deposits denominated in fiat currency, and invested in loans to either the private or government sector. The system is “safe”, as long as the returns and cash flow from the asset side is sufficient to pay off the liability side.

Put it this way: We believe in the government and the banks because the state protects the value of the currency that we hold. But basically, the government pays back the debt by printing more debt. If private debt fails in the form of non-performing loans, even banks can fail, which is why they are highly regulated to ensure that they have sufficient capital and liquidity. But essentially, the fundamental problem in CeFi is that governments are borrowing too much and inflation is now on the rise.

In blunt terms, if the US loses its military supremacy or the next war, not so many people will believe in the US dollar. The backing of the currency is not just economic power but also military might. But as long as the currency is strong, it can be a weapon in war.

Mainstream finance is problematic because banks have a tendency to lend more to large borrowers rather than the millions of micro, small and medium enterprises (MSMEs). Since there are less than 60,000 listed companies in the world, MSMEs also lack access to equity capital, which explains why there is a huge debt overhang in the world. Debt is not only an issue for the US, the largest debtor in the world. The International Monetary Fund estimates that 60% of emerging and developing market economies are currently in danger of debt distress or failure.

Technology has now moved to the stage where the NFT (non-fungible token) market is fuelling the sale or trading of digital artwork that is now valued in cyber currency. In other words, digital assets are now being created and traded using cyber currency because the young find it convenient. Thus, the technology and market opportunity exists to create digital platforms that can provide know-how and funding to the millions of social enterprises (non-governmental organisations) that are involved in climate change or addressing social inequity issues.

The basic problem facing small enterprises is that they have neither the branding (trust), funding (initial capital or assets that can be collateral for borrowing), nor the talent (people with know-how) that will enable them to reach the take-off stage. Lots of young people have talent, but they lack the funding or know-how to take them to the next level. Currently, venture capital (VC) or private equity (PE) firms are basically sponsors who take commercially viable MSMEs and coach them (providing talent, know-how and funding), hoping that one of them would become a unicorn (reaching eventual market valuation of more than US$1 billion).

In most cyber currency outfits, the sponsors “mine” or create the cyber currency and benefit if the liability side (the cyber coin) reaches higher market valuation. The sponsors benefit from the higher valuation on the asset side. But what if the asset side is basically used to fund lending or equity to do good, such as dealing with climate change, or investing in MSMEs that are themselves contributing to public good?

In other words, instead of “privatising” gains from DeFi, we create a Wiki-like platform that operates “by the public, of the public and for the public good”. Suppose we create a Wiki-Ori platform (ori being the Japanese word for weaving) that networks or weaves together the global know-how and funding to help local MSMEs improve the local environment in terms of either charity or commercialising of local products or services.

Wikipedia is the classic example of how many people freely contribute their time and know-how to maintain the world’s best known free and most vibrant encyclopaedia. A lot of the know-how and funding rests with the baby boomers, who are now beginning to retire. Such talent cannot be allowed to go to waste, but should be used to contribute to society by “teaching by doing” — the obverse side of “learning by doing”. Wiki-Ori’s objective is not to make individuals rich (the CeFi model), but to make society and the planet better by being more inclusive and smart (DeFi model).

Malaysia could be a very good place to launch Wiki-Ori, because of the growing social inequities and the concern about a green, inclusive future using technology. Islamic finance is about ethical finance, which, if we use technology smartly for the rakyat, could be the pioneering wave of how to uplift the millions of MSMEs around the world.

Watch this space as we delve into the technical aspects of using DeFi to make social change happen.