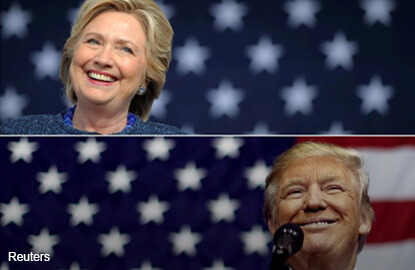 "Under this scenario, we will maintain our end-2017 KLCI target of 1,745 pts, which is at a 1x multiple premium to its 5-year historical average of about 16.5x. This premium is to reflect the sustained accommodative monetary policy stance adopted by central banks globally," the analysts said.

However, a win by Republican nominee Donald Trump will lead to a major sell-off in stock markets, as investors evaluate U.S. policies under the Trump administration, according to the analysts.

They said the sell-off could last for months.

“Under this scenario, we cut our end-2017 KLCI target by 100 points to 1,645 points, which is at a zero premium to its 5-year historical average of about 16.5x. This to reflect the uncertainties in the US and global economies under the Trump administration, that would offset the premium arising from the sustained accommodative monetary policy stance adopted by central banks globally,” they said.