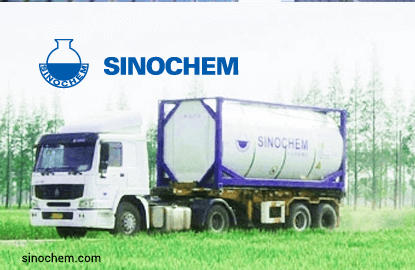 SINGAPORE/NEW DELHI/BEIJING/LONDON/OSLO (Feb 21): China's Sinochem is exploring the sale of its 40% stake in Brazil's Peregrino offshore oilfield, four people familiar with the matter told Reuters, a deal that could see the state-owned conglomerate walk away what was once touted as a key overseas asset because of historically low oil prices.

The oil and chemicals firm agreed to buy the stake from Norway's Statoil for US$3.07 billion in 2010 — beating out a raft of Chinese rivals chasing high-quality assets. The Norwegian giant owns the other 60% of Peregrino, the largest heavy oilfield it operates outside its home patch.

But two of the people with knowledge of the matter said Sinochem is moving to sell its largest overseas upstream stake — with capacity to pump 100,000 barrels a day — as it reshapes its assets to reflect oil prices having halved in the last two and a half years. With that in mind, one person said, Sinochem was pitching the sale at a big discount to its purchase price.

Earlier this month, Reuters reported Sinochem was in early talks to buy a stake in Singapore-listed commodity trader Noble Group, a move that would further its ambitions to become more active in global energy trade and also develop China's gas industry.

The process to sell the Brazilian stake is still at an early stage and a final decision would depend on how the negotiations progress, the people familiar with the matter said. They spoke on condition of anonymity because they were not authorised to discuss it publicly.

Two sources said Sinochem's intent to sell the stake has been shared with India's Oil and Natural Gas Corporation. ONGC did not respond to requests for comments.

One person said the stake is also likely to be pitched to other international buyers, including some Japanese firms and Kuwait Foreign Petroleum Exploration Company, which snapped up Royal Dutch Shell's stake in Thailand's Bongkot gas field for US$900 million last month.

The potential sale of the stake in Peregrino — located 85 km off Brazil in the Campos basin below about 100 metres of water — comes as oil prices hover in a mid-US$50s per barrel range, well below the highs of recent years. That trend has also prompted other industry players to consider selling once-prized assets.

Earlier this week, Reuters reported Malaysian state-owned oil and gas firm Petronas is aiming to sell a large minority stake in a local gas project for up to US$1 billion, as it seeks to raise cash and cut development costs.

For its part, Sinochem has seen growth in its key oil trading business stagnate, with increasing domestic competition from the likes of state oil traders Unipec and Chinaoil, while overseas oil and gas assets have struggled amid the prolonged low oil prices.

"Sinochem is readjusting its energy asset structure," said a Beijing-based industry veteran familiar with the company's strategy. "As a medium- to small-sized oil producer, exposure to higher cost assets like deep water has become over-challenging."

"The company sees itself more as an asset manager. This becomes a clearer direction under the new management," the industry executive said, referring to Sinochem chairman Ning Gaoning who took over the helm last year.

The potential sale of the Peregrino stake also comes ahead of the second phase of the project's development, expected to cost about US$3.5 billion with production from the new phase set to start by the end of the decade.