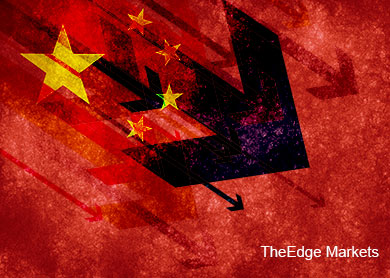 BEIJING (Oct 21): China's economic growth cooled to 7.3 percent between July and September from a year earlier, the weakest expansion since the global financial crisis and reinforcing expectations that Beijing will need to roll out more stimulus to avert a sharper slowdown.

With a faltering property market increasingly dragging on manufacturing and investment, the reading was the slowest for the world's second-largest economy since early 2009, when the growth rate tumbled to 6.6 percent.

Economists polled by Reuters had expected third-quarter growth to cool to 7.2 percent from 7.5 percent in the second quarter, adding to worries about flagging global growth which have sent financial markets tumbling in recent weeks.

On a quarter-on-quarter basis, growth eased to 1.9 percent versus expectations of 1.8 percent and down from 2.0 percent in the second quarter.

Other data released alongside the gross domestic product (GDP) report on Tuesday showed factory output rose 8.0 percent in September from a year earlier, beating expectations for a 7.5 percent increase and up from August's six-year low of 6.9 percent.

Fixed asset investment, a key driver of the Chinese economy, was weaker than expected. It climbed 16.1 percent in the first nine months compared with the same period a year earlier, below forecasts for a 16.3 percent rise and cooling from 16.5 percent in the first eight months of the year.

Retail sales rose 11.6 percent in September from a year earlier, below analysts' predictions of 11.8 percent and down from the previous month's 11.9 percent.

A raft of lacklustre and at times alarming economic data in recent months presaged slowing third-quarter growth in China, with the growing drag from the property market blunting the impact of stimulus measures which were rolled out earlier in the year.

Beijing is expected to announce fresh support measures in response to the weak economic picture as China is on track to miss the official 7.5 percent growth target for the year, analysts said ahead of the data release.

However, Premier Li Keqiang has said repeatedly that the government would tolerate growth slightly lower than the target as long as the jobs market holds up.

Most economists do not expect more aggressive policy action such as interest rate cuts unless conditions sharply deteriorate.