Information technology (IT) issues prevented Celcom from launching new plans for almost a year, and this affected dealer confidence. This caused service revenue to drop by 3.4% y-o-y in 3Q (against previous guidance of a flat second half) on lower average revenue per user (ARPU) (4% y-o-y) and a smaller subscriber base (2% y-o-y). The post-paid segment suffered the most, although this was partly offset by the stronger wireless broadband segment. However, with the IT issues resolved in October, Celcom hopes to resume growth momentum by launching several plans in 4Q with better services.

Axiata guided that there is no monetisation plan for its tower arm, e.Co, in the next 12 months as it wants to focus on reducing capital expenditure (capex), improving operating efficiencies and raising tenancy ratio for now.

We cut FY14 to FY16F earnings per share by 6% to 11% largely to reflect weaker revenue at Celcom and the weaker rupiah against the ringgit. Correspondingly, we trim our sum-of-parts-based target price to RM6.95. — AllianceDBS Research, Nov 25 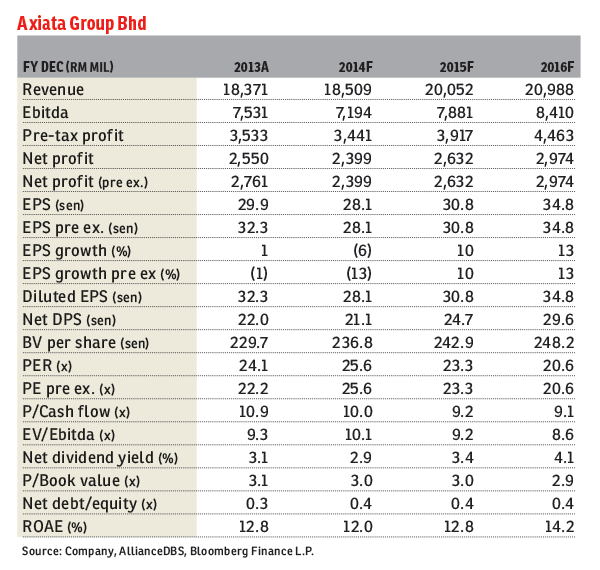 This article first appeared in The Edge Financial Daily, on November 26, 2014.