The car to solve your personal image crisis 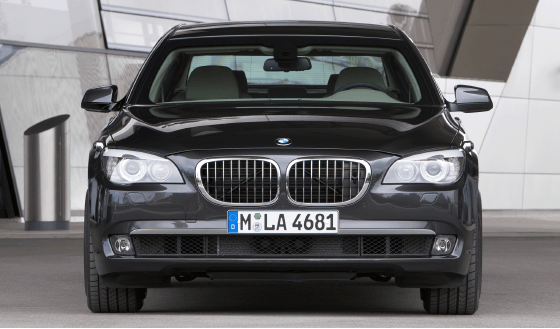 THEN allow me to suggest the BMW 750Li xDrive Sedan. Long, lean, dark and powerful, it’s just the thing to lend you some much-needed gravitas. I also suggest you wear black.

I drove the US$95,000 (RM340,100) 7 Series for a week around New York state, from Manhattan to Brooklyn, out to Fort Tilden beach and up to Nyack. I had it on the crowded streets on a Saturday in Soho, and on icy post-blizzard roads in New Jersey.

Driving the 7 Series, the biggest of BMW’s line, feels like putting on a structured charcoal suit. This is not a soft, serene ride like you might expect from a Mercedes S600. It’s fitted. It’s a little heavy, very serious, but you know it’ll do the work.

The one I drove came with enough upgrades to push the price to US$118,000, and I recommend you do the same. Why scrimp when you’re buying a car that should double as an office? Lord knows you’re already paying enough for it. 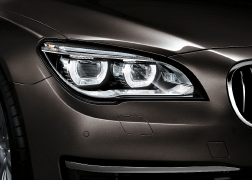 This version of the 7 Series (there are many others of varying horsepower and efficiency ratings, including an inline six, 12-cylinder, hybrid, and diesel engine) comes standard with an interior clad in soft black Nappa leather, bright adaptive headlights, heated front seats, soothing interior ambient lighting, parking cameras and safety control, AWD, and an 8-speed automatic transmission. 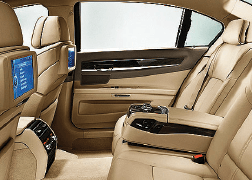 Here’s where to splurge: the US$3,100 Executive Package (power rear sunshade, instrument panel, ceramic knobs), luxury rear seat package including massage chairs (US$3,700), and the rear entertainment package (US$2,800) complete with six-disk DVD player and one large rectangular screen attached behind both the driver and the shotgun front seats.

The M Sport package (US$3,300) adds subtle swagger: Those tiny Ms with three bold stripes appear near the accelerator pedal, on the doors, and in other quiet places. This also features steering wheel gearshift panels, an aerodynamics kit, and several choices of cool double-spoke alloy wheels.

You might also consider the US$2,600 Night Vision System. In short, it sees warm bodies. It allows the driver to peer five times further into the dark than with regular headlights, potentially saving you from an expensive (or worse) collision with night-time animals like deer and deer. It’s the same one Rolls-Royce and Maybach use, with alternating colours for animal and human activity ahead. The tool is accurate and at the forefront of crash-avoidance technology. 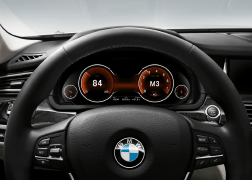 The design inside the 7 Series is clean, modern and relatively minimal. Germans don’t believe in clutter. Or small talk, but that’s another subject. The instrument panel here is the same one BMW Group has perfected in all of its models, including those from Rolls-Royce. Every dial is oriented toward the driver, every knob reassures with its tactile feedback; every angle is meant to enhance driving enjoyment.

I like how the front gauges (speed, gasoline, rpm) are all digital —they’re displayed on a colorful black-lit screen that blends well with the head-up and night-vision displays embedded in the windshield. It doesn’t tax the eyes like regular computer or television screens. I also like how the blind spot sensor warns with the briefest of flickers in the side mirrors as you change lanes. It is effective but unobtrusive.

Elsewhere, BMW’s flawless navigation system (why wait till you’re already lost?) comes standard with its generous technology package, as does the blind spot detection, active cruise control, and a concierge service that locates points of interest (restaurants, theaters, shops) wherever you’ve ventured. Though I will say the service is more specific than GPS maps, I find the advice of friends and town locals is always best.

The overall effects set simultaneously engages you and alleviates you from the more annoying parts of sitting behind the wheel. It makes you a better driver rather than taking over driving responsibilities or, worse, just getting in the way. 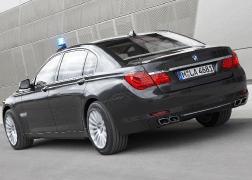 Parking this car is a challenge because of its length. It’s an inch shorter than the Mercedes S600 but three inches longer (and considerably more expensive) than an Audi A8. Multiple times along narrow Soho streets I had to reverse and re-angle the car before pulling out of a parking spot. I had to do the same in the East Village, as I manoeuvred it around the steel fenders of a double-parked truck.

The moral of the story is this: I liked this automobile. You should buy it if you’re in the market for a town car and looking among other big guns (Mercedes S600, Audi S7) in the category. Or if you’re trying to decide between the smaller 6 Series Grand Coupe or the 5 Series, you might as well go for the 7, too. It’s nearly 10 inches longer than both, for a comparable price and the full bragging rights the top-of-the-brand status affords.

The exterior of the 750 is not charismatic. It’s not stunning, and it’s not sexy. But it isn’t meant to be. And unsexy doesn’t mean bad-looking. The 7 Series uses BMW’s signature kidney grilles, angled headlights, and subtly athletic body as a lesson in form following function. Again, think of the 750 as a high-powered lawyer at the height of his career — efficient, effective and expensive. The fact that he’s well-dressed is just part of the package.

And when you finally crawl in back, you’ll find a rear portion large enough for a pair of NBA power forwards. It even comes with small footrests embedded into the floor, perfect to rest your sneakers.

As you might expect, the trunk follows suit. You could fit the team manager — or your opposing counsel — inside. Not that you should. But he may take you more seriously after that. — Bloomberg