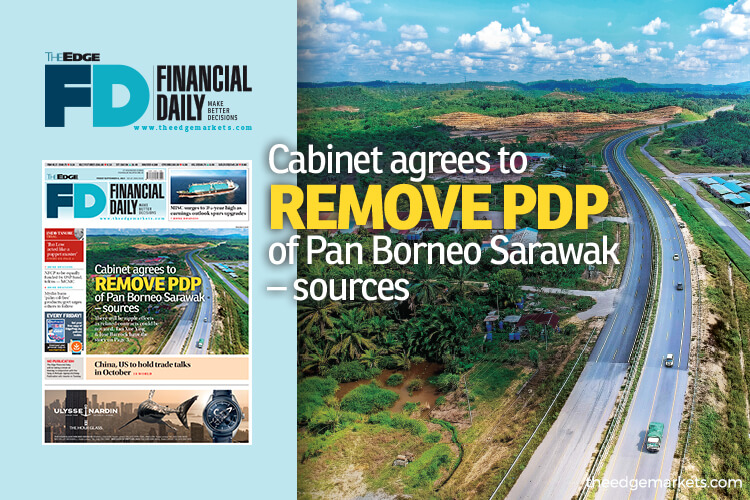 KUALA LUMPUR: The government has decided to terminate the project delivery partner (PDP) agreement for the Sarawak portion of the Pan Borneo Highway project although nearly half of the first phase has been completed, sources close to the matter said.

It is understood that the rationale of the decision is cost saving.

The PDP for the portion of the highway is Lebuhraya Borneo Utara Sdn Bhd (LBU), which is linked to Tan Sri Bustari Yusof. The contract was awarded to LBU when Bustari’s brother Datuk Seri Fadillah Yusof was then public works minister in June 2015. The decision to terminate the PDP agreement was made after the cabinet’s careful deliberation at a meeting on Wednesday, sources told The Edge Financial Daily.

“It was presented at the cabinet meeting yesterday (Wednesday) and agreed to. They (LBU) have not been officially notified, but will likely be informed in a few weeks’ time. There will be savings [from the termination of the PDP agreement],” a source said.

Consequently, the agreement with contractors that were signed previously could also be novated, according to the source.

Launched in March 2015, the multibillion-ringgit project is slated for completion end-December 2021. As of July, the first phase of the Pan Borneo Highway in Sarawak is 45% complete, slightly ahead of the scheduled completion rate of 43%, according to Works Minister Baru Bian.

The dual carriageway, spanning some 1,060km from Telok Melano to Merapok once done, is hailed as the transportation backbone of the state, opening up economic corridors and opportunities in areas it traverses.

While construction works are underway, the highway project continues to be under scrutiny as the Pakatan Harapan-led government remains laser-focused on cost-cutting.

Baru was earlier reported as saying that his ministry can bring down the project’s cost should the federal government take over from the PDP.

This is as a fee of 5.5% of the project cost must be paid to the PDP under the contract agreement. Given the RM16.49 billion price tag, this means that the PDP model for the Pan Borneo Highway in Sarawak would have cost the government some RM907 million.

PDP contractors usually earn a certain percentage of a project’s cost, but do not have to bear the full brunt of cost overruns and delays, as compared with the turnkey model, in which the project cost is fixed from the beginning.

On March 21, The Edge Financial Daily, quoting sources, broke the news that the federal government cancelled the PDP model for the Sabah portion of the highway project, in favour of the turnkey contractor model.

MMC Corp Bhd had later confirmed that Borneo Highway PDP Sdn Bhd (BHP) had on April 22 received a notification from the government on the termination of its PDP agreement.