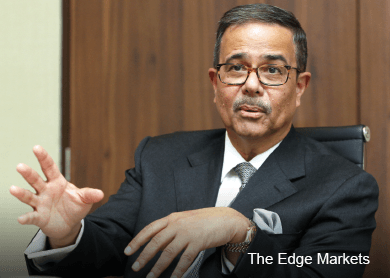 KUALA LUMPUR: Rental reversion — the main income for real estate investment trusts (REITs) — is largely dependent on business confidence and consumer sentiment, and both seem to be sluggish this year.

Consumer sentiment is expected to be weak this year — no surprises there — due to a higher cost of living and the implementation of the goods and services tax (GST) on April 1.

Business confidence also does not seem to be faring any better, what with the continued slump of the ringgit and global oil prices seen in the first week of the new year. The FBM KLCI lost 2.5%  to 1,709.18 points on the first six days of the year before snapping the downward trend yesterday after gaining 18.88 points or 1.1% to settle at 1728.06 points.

AllianceDBS Research Sdn Bhd analyst Marvin Khor told The Edge Financial Daily that the generally softened consumer sentiment could dampen prospects for rental reversion. He said rental for the office segment will be particularly pressured as the segment continues to be plagued by a supply glut, while older buildings are expected to see increasing vacancy rates.

“We think retail REITs with assets in prime locations would be more likely to secure positive reversions, as retailers should want to maintain their locations in key addresses, regardless of which stage the economic cycle is in. Nonetheless, it will still be subject to the level of rents tenants will be able to absorb,” he said.

Hence, Khor expects retail REITs will generally fare better than office REITs this year.  However, he cautioned that rental and occupancy in suburban areas may come under pressure going forward, due to the increasing supply of rental space.

Still, he said it will be positive for REITs if the central bank maintains the overnight policy rate (OPR) next year, which he thinks is likely.

“Our economist is no longer expecting any OPR hikes in 2015 due to a more subdued economic outlook, which is positive for yield-curve sensitive securities like REITs,” he said, adding that any unexpected and significant changes in the interest rate could cause a rerating for the sector.

For now, AllianceDBS maintains a “neutral” rating on the  REIT sector, with Sunway REIT as its top pick, due to its high potential for inorganic growth as it will soon complete the refurbishment of Putra Place, and possible asset injections from Sunway Bhd.

“The impact of oil prices on Malaysia’s economy and its effects on government spending, consumer and business confidences, are going to be the main talking point in 2015,” LaBrooy told The Edge Financial Daily.

If the current weakness in the market persists, LaBrooy, who is also chief executive officer of Axis REIT, expects companies to enter into sale and leaseback agreements to bolster their balance sheets this year.

“REITs have the advantage of long leases and secure tenants, which allow them to transact in a challenging market environment, leveraging on their [tenants’] financial stability,” he said.

However, he admitted that the oversupply of space in the Greater Kuala Lumpur region, particularly for office and retail spaces — will pose a challenge for REITs in those segments.

But there’s a silver lining for the industry, according to LaBrooy, who thinks that the measures employed by the government to cool down the property segment could work to REITs’ advantage.

“We are seeing more assets becoming available for sale to REITs, with accretive yields, following the cooling measures taken by Bank Negara Malaysia on property transactions,” he said.