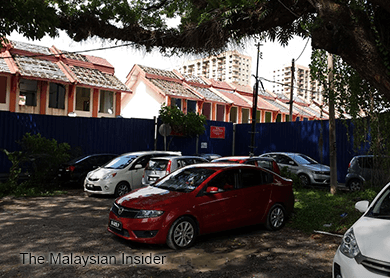 (May 28): Despite earlier reservations, most stakeholders in Brickfields, Little India, are now keen to see the change that will soon take place at the site of the 99-year-old 100 Quarters in Jalan Rozario, in the Brickfields township of Kuala Lumpur.

They hope that the development will have a positive impact on the surroundings and add value to the area.

“The place has become a safety hazard because the houses have been left vacant and we have seen drug addicts there. It is better that the place is developed instead of leaving it idle,” he said.

However, Balasingam expressed hope that the developer would retain one of the units to commemorate the history of the area.

Resident R. Kuberan, who has been staying at the Eliahthamby flats in Jalan Sultan Abdul Samad for 35 years, said the sooner the demolition takes place the better it would be for the residents.

“The area has been empty for a very long time and there is a lot of garbage there. We hope that they clear the area as it could be a possible breeding ground for the Aedes mosquitoes,” he said.

The preliminary work to demolish the former government quarters started on Wednesday.

It is learnt that the major work for the demolition would start on Monday.

MRCB, the developer for the KL Sentral transport hub nearby, had said during an editor's briefing on Tuesday that the former quarters would be demolished due to safety and security reasons.

"The place is now a hazard as the vacant units have been vandalised and a hangout for undesirable elements including drug addicts," its executive vice-president Datuk Dell Akbar Khan had said.

He had said that although the 1.4ha land had yet to be handed over to MRCB under a privatisation agreement with the government, the developer had decided to demolish the place as residents had expressed concern over the vandalism taking place at the dilapidated quarters.

The demolition is being carried out with the approval of Bahagian Pengurusan Hartanah under the Prime Minister's Department, which oversees the land, and Kuala Lumpur City Hall.

Traders in the area, meanwhile, hope that MRCB would take the necessary measures to ensure that they would not be affected by the demolition exercise.

Food stall owner S. Ganesan said that rather than leaving the area abandoned, it was good that the place was being developed.

“It is sad to see the structures go, but we believe that the development will benefit the traders in the long run,” he said.

Ganesan also urged the developer to ensure that the lorries carrying the construction debris would not pass through Lorong Chan Ah Tong where their shops were located.

“We are doing food business and we don’t want the dust and construction debris spilling over to our shops,” he said.

Ganesan also hopes that the developer would consider incorporating the food operators into their development plans.

“We don’t mind being part of their development if they are looking to build apartment units here. They can provide a place for us to do business,” he said.

It has previously been reported that MRCB's plans for the site will feature three blocks of 1,350 serviced apartments in 40-storey towers.

The quarters were built in 1915 and consist of three rows of houses along Jalan Chan Ah Tong, Lorong Chan Ah Tong and Jalan Rozario in a prime location near the heart of Kuala Lumpur.

They were once the homes of employees of Malayan Railways or Keretapi Tanah Melayu. The KL Sentral integrated transport hub is located where the old railway depot used to be.

The residents were subsequently moved to the Ang Seng Quarters built by MRCB as part of the privatisation agreement with the federal government which included two other projects, Little India and the Pines Bazaar which has been renamed Kompleks Tun Sambanthan.

The privatisation agreement also involved another adjacent plot of land, measuring 0.6ha, which is currently an open space being used as a temporary car park and also by several food stall operators. – The Malaysian Insider