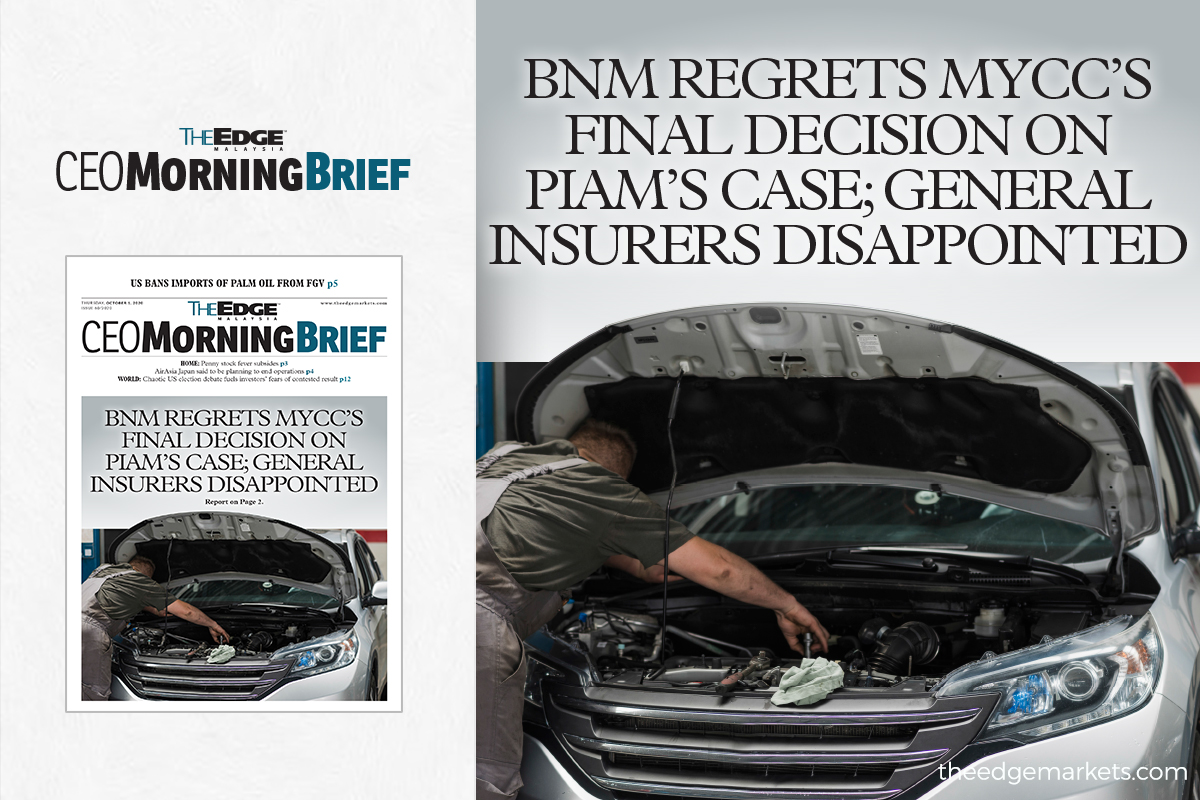 KUALA LUMPUR (Sept 30): Bank Negara Malaysia (BNM) said today it regrets the Malaysia Competition Commission's (MyCC) final decision, in which MyCC concluded that Persatuan Insurans Am Malaysia (PIAM) and its 22 members had infringed Section 4 of the Competition Act 2010 by entering into an agreement on the application of trade discounts on automotive parts prices and hourly labour rates for motor vehicle repairs by workshops under the PIAM Approved Repairers Scheme.

PIAM is also known as the General Insurance Association of Malaysia.

"BNM regrets MyCC’s decision as the arrangement was put in place through the facilitation and direction of BNM to the general insurers to address disputes between workshops and general insurance companies that had adversely impacted consumers.

"This was due to protracted delays and disagreements over insurance claims payments for motor repairs. The resulting arrangement was implemented after discussions between PIAM and the Federation of Automobile Workshops Owners' Association of Malaysia (FAWOAM).

"As a result of BNM’s regulatory intervention, delays in settlement of claims arising from motor repairs had reduced significantly and policyholders were better served by a more efficient claims settlement process. For example, the average turnaround time from the date of notification of an accident to the completion of repair works had reduced by 55% since 2010," BNM said.

According to the central bank, the decision by MyCC may unravel the positive outcomes from past and ongoing initiatives by BNM and the insurance industry to curb fraud and improve the efficiency of the motor claims process.

BNM said this in turn will have wider ramifications for access to and the cost of motor insurance for Malaysian consumers.

"In light of the decision by MyCC, BNM will follow due process and review its options to safeguard the interests of the motoring public. If any policyholders experience undue delays in the repair and release of your vehicles, please contact your respective insurers for advice," BNM said.

Meanwhile, PIAM said today in a separate statement the association and its members are profoundly disappointed with the final decision issued by MyCC on Sept 14, 2020 against PIAM and the 22 general insurers.

PIAM said MyCC found that the association and the insurers had infringed the Competition Act 2010 in relation to the arrangement between PIAM and FAWOAM on minimum hourly labour rates and spare part prices of six commonly used types of vehicles, namely Proton, Perodua, Naza, Nissan, Toyota and Honda.

"PIAM and its members have always placed the motoring public and policyholders at the forefront. To safeguard the interests of consumers, PIAM working under the direction of BNM agreed with FAWOAM to resolve the prolonged dispute between insurers and repairers over spare parts trade discounts and labour rates.

"BNM’s directive was in the interests of the motoring public and addressed consumers’ complaints about the motor repair process. It also supported ongoing reforms in the motor insurance industry to promote greater competition, innovation and affordability in the long term.

"PIAM has tendered clear and robust evidence to the commission that the arrangement with FAWOAM brings benefits to consumers — in terms of faster turnaround time for repairs, fewer complaints and growth in the number of repairers (therefore enhancing availability of repairers for accident repairs).

"The independent economist report by RBB Economics UK was presented by their economist in person before the commission on two occasions. The RBB report presented clear and robust tangible evidence of how consumers had benefited from the agreement," PIAM said.

According to PIAM's statement today, MyCC released its final decision after three years of investigations.

PIAM said the association and insurers had participated in good faith in the entire process, following the earlier proposed decision, on the basis that their evidence and arguments would be thoroughly evaluated, and that the final decision would have taken into consideration and properly construed all of the facts, arguments and evidence that had been presented to MyCC.

"After three years, PIAM is deeply disappointed that MyCC has released a decision that does not fully take into consideration the voluminous evidence tendered and legal arguments submitted. MyCC’s decision rejects legal and regulatory certainty, and is a decision against consumers and the motoring public of Malaysia. PIAM will lodge a strong appeal against the decision.

"PIAM would like to inform the motoring public that our member insurers stand ready to serve all policyholders through their hotlines and customer service channels. The industry is committed to continuously improving and enhancing the customer journey for all our policyholders," PIAM said.

At the time of writing, MyCC had neither issued a statement on its final decision nor a response to the statements from BNM and PIAM.