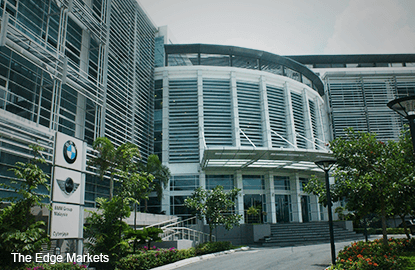 KUALA LUMPUR (June 23): BMW Group Malaysia has upped the ante of automotive sustainability with the launch of its BMW X5 xDrive40e, the 11th model to join its portfolio of locally-assembled vehicles here.

Launched today, the hybrid vehicle can travel at a top speed of 120 km per hour in all-electric mode, with lesser fuel consumption of 3.3 litres per 100 kilometres as well as carbon emissions of just 77 grams per kilometre.

BMW Group Malaysia managing director and chief executive officer (CEO) Han Sang Yun said since the group created the premium Sports Activity Vehicle (SAV) segment, the BMW X5 has been setting milestones and benchmarks in its class the world over.

“Today, the new BMW X5 xDrive40e will once again drive the future of the premium automotive industry, introducing luxurious ambience, innovative functionality, as well as cutting-edge future technology courtesy of BMW i to automotive enthusiasts in the country,” he said at the launch of the BMW X5 xDrive40e here.

“The new BMW X5 xDrive40e marshals in the next chapter of BMW EfficientyDynamics, delivering exceptional performance, as well as all-electric mobility with zero emissions and introduces a new form of commanding driving experience with a combination of pure electric and dynamic driving in a sports activity vehicle,” said Han.

The new BMW X5 joins the group’s popular fleet of the large SUV-series and is one of the new vehicles in the German automaker’s pipleline to introduce plug-in hybrid versions of its models.

Its high-voltage battery offers a gross energy capacity of 9.2 kilowatt per hour (kWh) and can be topped up with energy from any domestic power socket.

When charged by a conventional domestic power socket, the high-voltage battery can be fully recharged from flat in around 3 hours 50 minutes.

Under the umbrella of BMW 360° ELECTRIC, customers are offered the ChargeNow service, which comprises of a ChargeNow card that grants straightforward access to partner charging stations, ChargEV.

The BMW X5 xDrive40e has a drive system comprising of a two-litre four-cylinder petrol engine with BMW TwinPower Turbo technology and a synchronous electric motor integrated in the 8-speed steptronic transmission.

It is also fitted with a 2.0-litre combustion engine, which has already won the coveted title of “International Engine of the Year” three times.

As the most powerful four-cylinder petrol unit in the BMW Group’s engine portfolio, coupled with an electric motor that delivers an output of 83 kW with a maximum torque of 250 Newton metre (Nm), the new BMW X5 xDrive40e completes the 0 to 100 kilometre (km) per hour sprint in just 6.8 seconds, and has an electronically limited top speed of 210 km per hour and 450 Nm of peak torque.

The retail price of the BMW X5 xDrive40e is RM582,800 and with a government-approved hybrid incentive, the vehicle is priced at RM388,800 without insurance.