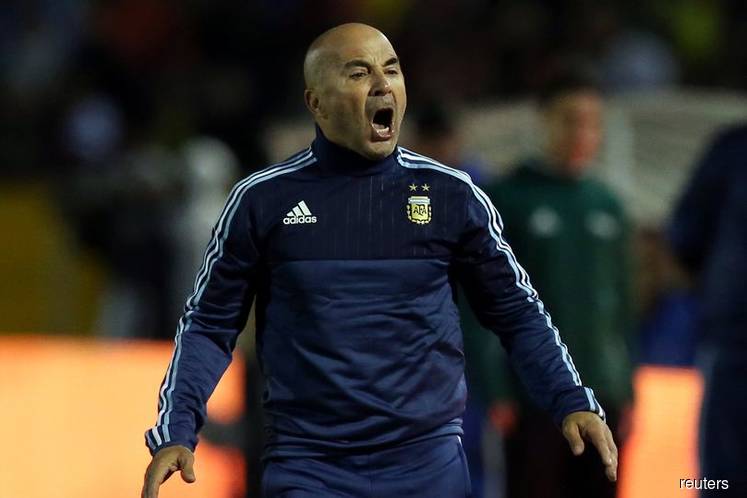 NIZHNY NOVGOROD, Russia (June 21): Argentina's despondent coach Jorge Sampaoli took the blame for Thursday's shambolic 3-0 World Cup defeat by Croatia as he tried to deflect the criticism from a terrible goalkeeping mistake and a poor performance by his captain Lionel Messi.

"It's not the boss's partial responsibility, it's his total responsibility," said Sampaoli, after presiding over Argentina's heaviest defeat in the World Cup group stage since 1958, a result that saw Croatia qualify for the last 16.

In front of a massive and increasingly incredulous following in the Nizhny Novgorod Stadium, Argentina collapsed in the second half after keeper Willy Caballero messed up a clearance and Ante Rebic fired home Croatia's first goal.

"It's not right to blame Caballero," said Sampaoli, looking bemused during his post-match news conference.

"If I'd planned things differently, it would have worked out differently ... I honestly thought the plan for this match was going to put pressure on the opponent. But after the disaster of the first goal, it was tough, we were lost emotionally."

Messi, probably playing in his last World Cup, had minimal impact, largely marked out of the game by well-drilled Croatia.

"Our driving force is Leo, but we couldn't find him. We work as a team to get the ball to Leo, but also the other team (Croatia) works to avoid that," added Sampaoli, whose best players have all underperformed during his year in charge.

"It's the driver's responsibility... Everything that happens to the team is due to the leadership ... Leo is prejudiced by not having in us drivers as good as him."

Third in Group D with one point after two games, Argentina are now struggling to scrape into the second round and an exit at this stage would be humiliating for a team of their stature.

"There is shame, pain, at not delivering for the Argentine people. It's been a long time since I felt like this, and now it's happening with the shirt of my own country. It hurts badly," added Sampaoli.

Argentina drew 1-1 with Iceland in their first game, when Messi missed a penalty, and next face Nigeria, who lost their opener to Croatia, in their final Group D match.

"We have one match left, and we have to take whatever opportunity the others give us to see if we can get through to the second round," Sampaoli said.

"I say sorry to all the fans who made such an effort to come to Russia. "I shared their dream. I did the best I could."