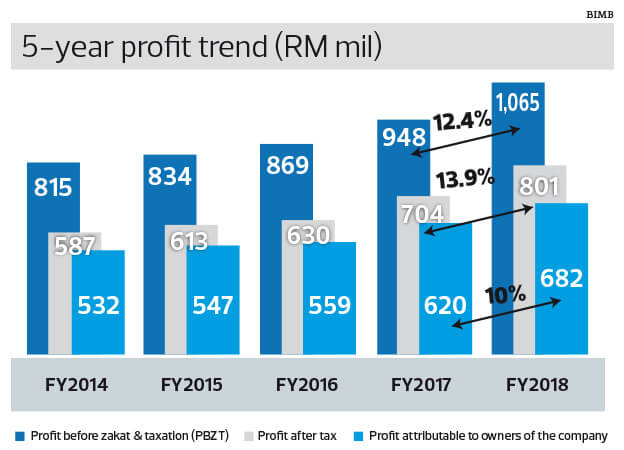 IN recent years, BIMB Holdings Bhd has consistently outperformed the banking industry on important fronts like return on equity (ROE) and financing growth. But with the operating environment getting increasingly tough, a key question on investors’ minds is, will it be able to sustain the strong growth levels?

CEO Mohd Muazzam Mohamed acknowledges that it will be challenging but he is confident the group will keep growing over the next three years, albeit at a more moderate pace.

“We used to do double-digit growth in net financing in the past years but since 2017, we slowed to single-digit growth. Last year, we did 8.5% [versus the industry’s 4.5%]. This year, it will moderate further, probably to around 7%, but it would still be above the industry average, I would say. Growth in profit before zakat and tax (PBZT) may be a bit slower too, but there will still be growth,” he tells The Edge in an interview.

A financial holding company, BIMB derives about 80% of its earnings from its wholly-owned Islamic lender Bank Islam Malaysia Bhd and the rest from its 59.6%-owned Syarikat Takaful Malaysia Keluarga Bhd.

Two weeks ago, BIMB turned in a record net profit of RM682 million for FY2018, a 10.1% increase year on year, helped by solid financing growth, cost containment and stable margins.

Its earnings fell within analysts’ expectations and translated into an ROE of 14.3%, higher than the industry average of around 10%. PBZT grew 12.5% to RM1.07 billion while revenue grew 12.9% to RM4.2 billion.

BIMB’s earnings were commendable considering that the group had made an allowance for impairment of financial assets of RM81.4 million — owing mainly to the kicking in of the new MFRS 9 accounting standard — compared with a write-back of RM15.4 million in the previous year.

According to Muazzam, BIMB’s growth over the next three years will be fuelled mainly by consumer financing. However, an increased focus on fee-based income and small and medium-sized enterprises (SME) will give the group a boost, he says.

BIMB plans to grow fee-based income by driving its bancatakaful and wealth management businesses further. This will be done by increasing product offerings as well as improving staff productivity, he says.

“As for wealth management, we’re doing two things. We’re doubling our sales executives to about 200 this year. We’re not hiring new people but converting over 100 of our existing 520 personal financial executives — the people who sell cards, personal and house financing — into wealth executives. Of course, they’ll need to take the necessary exams, obtain licences and all that first. The other thing we’re doing is increasing our products,” he shares.

Its fund management firm BIMB Investment Management Bhd has a partnership with UK-based Arabesque Asset Management that it hopes to tap further. Arabesque is an environmental, social and governance (ESG)-Quant specialist that uses robo technology and data analytics when investing.

Muazzam says BIMB is open to the possibility of selling up to 40% equity interest in BIMB Investment to Arabesque as it sees value in what its foreign partner brings to the table. It is understood that Arabesque has an option to take an equity stake in BIMB Investment but has yet to exercise it.

BIMB’s fee-based income as a percentage of gross revenue stood at below-9% last year on the consumer side, and the target is to increase it to 10% this year and 12% by end-2021.

As for SMEs, Muazzam says BIMB’s financing to this segment stood at RM2.2 billion as at-end 2018. He wants to grow this by about 10% this year. “We have so far been focused on the bigger SMEs and not so much on the smaller entrepreneurs. Going foward, we will continue to focus on our vendor programmes with big companies like Petronas, Tenaga Nasional and Telekom Malaysia, where we finance [SMEs] that have contracts with them. But, at the same time, we are developing capabilities [that will help us finance] SMEs in the lower-revenue ranks,” he says.

For example, he says BIMB is working with a group of professors to come up with a psychometric model.

“In the past, a bank’s credit evaluation model was about assessing the customers’ ability to pay. Even though we say we have a behavioural card, what we look at is past payment behaviours. But now, we want to develop a tool for us to be able to assess the customer’s willingness to pay ... because as we go down the [SME] tier, these customers would have less of or little historical credit track record. That’s why banks find it difficult to give them financing. But, as you know, there’ll be a lot more of such companies in the future, so we must develop new tools to assess them,” he says.

This is, however, still at the developmental phase. “Hopefully, by 2021, we will be able to launch it so we can go into [financing] online retailers and all that,” he says.

Home and personal financing will remain BIMB’s main growth drivers. Last year, these accounted for 53.4% and 39.4% respectively of its consumer financing portfolio.

Muazzam is not overly concerned about the weaker property market affecting the group’s asset quality. “The good thing is that we focus on properties that are priced at RM750,000 and below. Supply and demand is still there, so we are comfortable about building in that segment. On the corporate side, our exposure to real estate is not that big and we are very selective ... the [vulnerable] areas like hotels and big retail malls, we try not to get involved,” he explains.

Its exposure to real estate stands at just 3.68% of total financing, while for construction, it is 5.2%.

Meanwhile, BIMB’s exposure to the oil and gas sector — an area that analysts continue to monitor closely given weak oil prices — has come down to 8.4% as at end-2018 from 9% a year earlier.

“To be honest, for us, there is no specific sector that has been showing a worrying trend,” Muazzam remarks. He points out that BIMB’s asset quality remains strong, with gross impaired financing ratio at just 0.92% as at end-2018, better than the industry’s 1.45%.

Muazzam shares that Bank Islam has embarked on a three-year transformation programme, CODE21, so named because it aspires towards culture, operational and digital excellence by end-2021. It involves the improvement of its processes and controls and retraining of staff.

Additionally, it wants to be the leading bank for social finance. Initiatives on this end will be through Sadaqa House, Bank Islam’s donation platform that enables funds to be channelled to needy communities through the bank’s partners.

Over the 2019-2021 period, Bank Islam is expected to spend RM300 million on digital initiatives and technology, starting with RM150 million this year.

The group’s CIR had been on the high side over the years as it added branches in a bid to reach an optimal level. It currently has 148 branches and has no plans to add more.

Muazzam is fairly confident the bank will be able to maintain its net income margin (NIM) at around 2.65% this year as there is less pressure to chase costly deposits. Last year, it scrambled to increase long-term deposits in a bid to raise its net stable funding ratio to over 100%. It raised its base rate by 13 basis points last November.

As for Syarikat Takaful Malaysia Keluarga, the public-listed company has had good growth in recent years, with PBZT growing at a CAGR (compound annual growth rate) of 14.4% over the last five years compared with 3.7% for Bank Islam. “Its PBZT will continue to grow this year, albeit probably not as strongly as last year’s 32.7%,” says Muazzam.

BIMB’s three-year plan does not involve a merger with another bank, says Muazzam. “We don’t rule it out, but at this point in time, there isn’t any proposal on the table. I would say, if we’ve got to merge, it must be with a [partner] that will further strengthen us and not cause the bank to carry extra weight going forward,” he remarks.

In the meantime, though, all eyes are on BIMB’s anticipated restructuring exercise, which will involve Bank Islam taking over its listed status. The move is aimed at collapsing BIMB’s financial holding structure.

According to Muazzam, there is likely to be an announcement on this in the second quarter. He declines to divulge more details, saying only that the group first has to address a shareholder debt. The Edge reported in late January that BIMB, controlled by Lembaga Tabung Haji, was seriously considering undertaking a private placement of new shares to raise funds to repay a shareholder debt of some RM800 million ahead of the restructuring.

“More visibility on BIMB’s much-talked-about restructuring plans could fuel investor interest in the stock, though we think consistent delivery of robust earnings growth would also keep the stock on a positive trajectory,” says AllianceDBS Research in a March 4 report.

Bloomberg data shows that eight out of nine analysts who track the stock have a “buy” call on it, with one calling a “hold”. The median target price was RM5.02.

According to RHB Research, the stock still has attractive upside, notwithstanding its 19.1% year-to-date increase. “Underlying operations continue to outpace its peers while its balance sheet is healthy. As investors get greater clarity on its reorganisation plans, its price-to-book multiple will rise to levels more reflective of its resilient profitability and position as a proxy to the largest standalone Islamic bank in Malaysia,” it says.