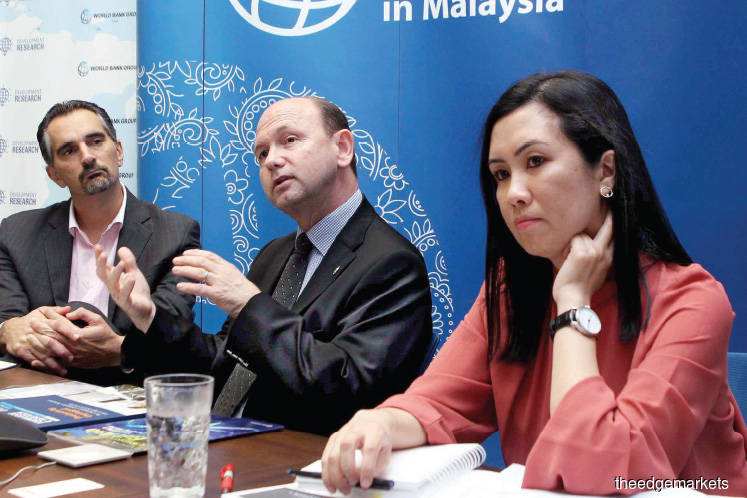 KUALA LUMPUR: The Pakatan Harapan government’s cost of living aid or “Bantuan Sara Hidup” (BSH) may be more targeted than its predecessor, Bantuan Rakyat 1Malaysia or BR1M, but is still limited in terms of depth, according to the World Bank.

“While BSH is expected to have a broad and progressive coverage, the depth of the programme is relatively limited, resulting in only a modest effect on overall inequality,” the World Bank said in its biannual Malaysian Economic Monitor released yesterday.

This is because the amount of benefits under BSH results in only a relatively small increase to household incomes for the poorest 20% in the country, it said.

The World Bank suggested that BSH could be improved without increasing the total amount paid by tweaking its payout formula to account for the number of children in each household when determining eligibility.

“In other countries, social assistance programmes are given out on the basis of conditionalities ... this can be considered,” shared Shakira Teh Sharifuddin, World Bank country economist, in an interview with The Edge Financial Daily after the release of the report.

That being said, social protection measures may only bridge the income gap in the short run, she said. “Over the long run, it’s very important to address productivity because that is what will structurally improve income,” she added. In this regard, she pointed to the need to address human capital to ensure Malaysians are equipped with the right skills amid changing technologies.

Education, healthcare and social protection are among the World Bank’s key areas of focus under its Human Capital Index metric, for which Malaysia scores 62%. This means children in Malaysia will only be 62% as productive as they could be when they reach adulthood, the World Bank said.

Notwithstanding the decline in inequality as measured by the Gini coefficient, Malaysia’s inequality is generally still high, said World Bank country manager Dr Firas Raad. “There are still pockets of poverty, not only among rural [citizens] but in urban areas as well,” he told the daily.

To the man on the street, it is not necessarily the proportional changes in income distribution that matter, but the absolute changes that are more important.

Therefore, even though income grew faster for the B40 between 2008 and 2011, larger increments went to those who were already better off, World Bank calculations show.

“From the perspective of absolute income differences, one may argue that income growth was not inclusive between 2008 and 2015,” it said.

In particular, more research is needed to understand Malaysia’s high level of childhood stunting, which affects one in five children and cuts across different states, ethnicities and income levels, Raad said.

Malnutrition will affect a child’s learning and productivity later on in life, said Gabriel Demombynes, the World Bank’s programme leader for human development in Malaysia, Brunei, the Philippines and Thailand, who urged Malaysia to up its game in tackling the issue. “We are in a race against time to ensure all children can reach their full potential,” he said.

Another area of concern is the lower average quality of public preschools in Malaysia versus private preschools, the report noted.

“This is of concern, given that the majority of preschools in Malaysia are public, with private preschools being generally only accessible to those who can afford the relatively high costs,” the World Bank said.

Raad said efforts must be made to ensure private providers comply with government standards as “there must be some attempt to harmonise standards [between both sectors]”.

Even though the increase in funds allocated for education and healthcare in Budget 2019 are an indication that the government is prioritising these sectors, Raad said that it matters not so much how large the quantum of the allocation is, but how effectively these sums are being used.

“In other countries which spend a larger percentage of their gross domestic product on healthcare, they don’t necessarily have better systems,” he pointed out.

This sets the country below 13.1 years on average of schooling in high-income countries, the report added.

“Malaysia has done relatively well, in line with other Asean countries, [based on] its previous model of investing in universal basic education [but the] emphasis today has shifted to learning in addition to teaching,” Raad said.

He recommended the implementation of assessment systems, which would be able to uncover deficiencies in the education system.