Banking: Adopting values that could avert another financial crisis 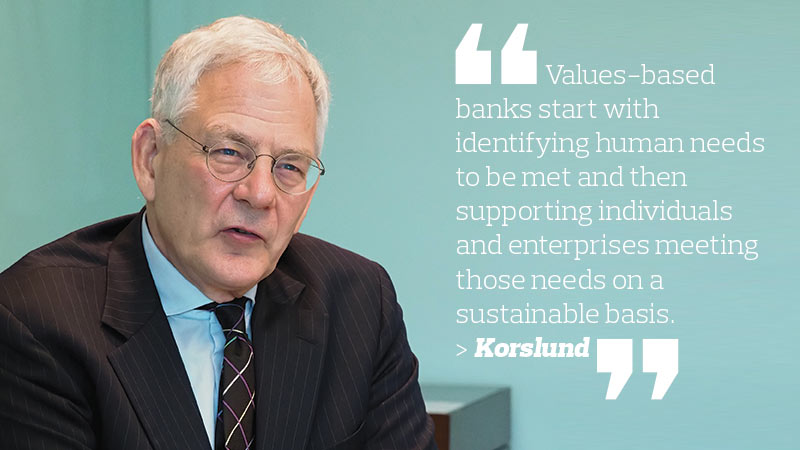 Embracing a values-based banking system could avert another financial crisis as financial institutions would be banking on the real economy, says David Korslund, senior adviser to the Global Alliance for Banking on Values (GABV).

He points out that today’s financial system is in many ways too large, too complex and too removed from the real economy. The banking sector — an important component of the economy devoted to holding financial assets — has become so focused on short-term profit maximisation that it does not pay enough attention to social and environmental risks and leaves billions of people without access to adequate or any financial services.

But when banks are driven by the real economy, they are financing real goods and services, says Korslund. “I believe that if banks focused on values-based banking, the odds of a crisis are substantially less. It comes from a strong focus on the real economy, which means you are financing real goods and services, and not speculations in the financial markets,” he adds.

“You are very closely tied to your clients and communities. If you are further away from your clients or community, it gets harder to know what is really happening.

Korslund spoke to Personal Wealth on the sidelines of the recent Global Islamic Finance Forum 2018.

The GABV was set up a year after the 2008 global financial crisis, which wreaked economic devastation and resulted in many losing their faith in the banking system. It started with 12 members in 2009, but has since gone from strength to strength. Today, it has 54 member banks.

Banks play an important role in the economy, but they can do more by contributing to cohesive sustainable development, says Korslund. “I think values-based banking is a very good antidote to financial crises. However, whether or not we are at the cusp of another financial crisis, it is very hard to tell.”

There have been numerous reports published in the past year indicating that the world economy is on the brink of another meltdown as governments and regulators have failed to push through the reforms needed to protect the financial system. While regulators the world over have tried to plaster the holes in their banking systems, shore up the reserves of banks and put in place tougher regulations on risk-taking, the “risks tend to rise during good times, such as the current period of low interest rates and subdued volatility, and those risks can always migrate to new areas”, according to the International Monetary Fund (IMF).

The IMF says in its Global Financial Stability report that global debt levels — which have ballooned to almost US$250 trillion, according to Bloomberg — are well above those at the time of the 2008 crash. And, it adds, unregulated areas of the financial system could trigger a global panic, referring to the development of financial technology, digital trading platforms and cryptocurrencies such as bitcoin.

“Despite its potential benefits, our knowledge of its potential risks and how they may play out is still developing. Increased cybersecurity risks pose challenges for financial institutions, financial infrastructure and supervisors. These developments should act as a reminder that the financial system is permanently evolving, and regulators and supervisors must remain vigilant to this evolution and ready to act if needed,” says the report.

In the last nine years, GABV has been canvassing banks to implement values-based rather than profit-driven policies. As a result, much headway has been made and there have been substantial changes to how banks operate, says Korslund.

“For example, they may create a collateralised debt obligation (CDO), which is then structured into a special purpose vehicle (SPV) with financial instruments issued by the SPV. With each phase of financial engineering, there is less connection with the real economy and more complexity,” he adds.

Korslund says if you exploit any system, you will come to a bad end. “The bad end can be a degraded environment or it can be a financial crisis. Exploitation just leads to a whole series of horrible consequences.”

Also, he stresses that “good information” is pertinent to ensure that financial systems are well-oiled. “I believe that markets are very helpful in terms of allocating capital. But markets need to have good information. I think there is a lot information in the financial system that is not good because there are too many uncertainties and risks that come later,” he says.

“For example, the likelihood of credit defaults in the future that lead to asset write-downs, the processing costs for complex financial instruments where the profits are booked at inception using a net present value concept with many assumptions, the costs incurred by energy companies if there is regulation on carbon output and so forth. Markets can only process the information that they have, but they are not effective at fully judging all the assumptions underlying that information.”

Although the banks that are a part of GABV are required to put social value before profit, it does not mean they are not financially stable, says Korslund. Financial resiliency was included as a principle as GABV members generally had capital ratios in excess of regulatory minimums, he adds.

“Thomas Jorberg, CEO of Germany’s GLS Bank [a GABV member], says it best: In values-based banking, we start by identifying a human need that one of our clients or enterprises can help meet and then we start by delivering value to society. Then you look to deliver the banking services in a financially sustainable way, which also means you have to provide a return to investors. So, we do not ignore profitability, but we start with the value we provide to society and then focus on how to profitably do that business to meet all stakeholder requirements,” says Korslund.

“I have been in banking since 1976 and I was with an international bank for 25 years. I have seen all sides of the banking story. Typically, when a bank develops its business plans and models, it identifies profitable activities and finds a way to exploit human need to deliver profit. When you start with exploiting the human need for money, you sow the seeds that created the financial crisis because when people saw the opportunity to make money on money, they did not really focus on whether they were delivering value to society.”

Making money on money relates to financial speculation, whereby banks decide where to invest their assets by not focusing on the real economy where goods and services are produced, but on instruments that exist only in the financial economy and financial markets.

The introduction of values-based intermediation (VBI) by Bank Negara Malaysia to invigorate the country’s Islamic banking sector is bound to put more emphasis on values before profit, says Korslund.

The GABV has been working closely with the central bank to be more focused on delivering the substance of Islamic banking. Islamic banking is very congruent with values-based banking as they share many similar principles, he says.

“Our view is that every bank, or at least many more banks, should be values-based. I have no knowledge of Islamic finance and very limited knowledge of Islam. But from the little I know, there are three main principles. The first is to avoid harm in this world and the next. I cannot speak about the next world, but I can think about how I can avoid harm in this world and that is something very concrete,” says Korslund.

“The third principle is that wealth and money are tools, not ends. I think that for values-based banks, we see money not as an end in itself, but a tool you use to help benefit society and avoid harm.”

For values-based banks, it is also necessary to not just avoid harm but to take concrete action to benefit society, he says. In other words, it is not just a matter of avoiding harm, but of doing active good.

“We look to see if you are helping to create economic resilience. Are you addressing issues of environmental regeneration, not just keeping the environment as it is but actually making it better for future generations? We also look at social empowerment. We believe that these are the human and societal needs that values-based banks should focus on,” says Korslund.

Bank Muamalat Malaysia Bhd was the first Islamic bank to be admitted into GABV in January. The reason it was enrolled into the organisation was the commitment showed by CEO Datuk Mohd Redza Shah Abdul Wahid.

“A key criterion for membership is a strong personal commitment from the CEO to be actively involved in GABV activities. That commitment was made by the Bank Muamalat CEO, who sought out GABV to be a member. Other banks in Malaysia may also meet our overall criteria that are related to the scorecard, but Bank Muamalat was the first with the CEO commitment,” says Korslund.

Values-based banking is a very different model from others in the banking system. One key difference is the way in which business decisions are made.

“Values-based banks start with identifying human needs to be met and then supporting individuals and enterprises meeting those needs on a sustainable basis. That is done on a financially sound basis, but the economics of the business decision come later in the process,” says Korslund.

How do the risks differ between mainstream and values-based banks? He says the two have different perspectives and areas of focus. “I think the difference is how you look at and analyse risks. For values-based banks, we start with the risk processes just like any other bank. But I think we tend to have a broader perspective.”

That means it analyses things such as the long-term environmental impact of the entity it is assessing for financing. If the operations of the entity in question result in some form of environmental degradation, it will eventually have to pay up sometime in the future, whether in terms of fines or lawsuits. So, even if the company is profitable, it is actually a risky proposition.

“The mindset of risk management within values-based banks is broader and that is helpful to reduce risks. Some of our banks could say they are willing to accept slightly more risks, not because they get more financial reward but because the project has significant social impact,” says Korslund.

He opines that meaningful change will only be possible if there is a generational change in the management of banks. “It is my personal view that it is time for the baby boomers to step back and let the new generation take the lead. I think with their [millennials] objectives, goals and thought processes, they may come to different conclusions,” he says.