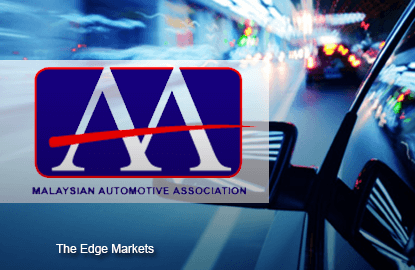 KUALA LUMPUR (March 25): Malaysian automotive players are grappling with profit margins being impacted by a weaker ringgit and also battling it out to maintain market shares, says the Malaysian Automotive Association (MAA).

MAA president Datuk Aishah Ahmad said the automotive players' profit margins are mainly being weighed down by a weaker ringgit as companies are still importing many completely knocked down components despite automobiles being assembled locally.

However, she said amidst dampened consumer sentiment, companies are also hard pressed to maintain their market shares.

"It is a fact margins are being reduced because the ringgit has weakened and we are paying for tax and all that in foreign currency.

"But the players, at the same time, they must ensure their market share is retained so that's where the competition is always there," she told reporters today after MAA's annual general meeting.

Aishah said customers, however, will not be significantly affected as automotive players entice consumers with incentives and deals.

"The customers will not be affected so much, because they will still get very good deals despite that companies having less profit to give away and sometimes have to approach principles for support," she said.

Vehicle sales in February shrank by almost a quarter to 37,876 units — the lowest recorded since August 2013 — from 50,390 units in the same month last year, according to MAA data.

On a sequential basis, total industry volume (TIV) in February was 15.1% lower against 44,591 units sold in January.

MAA had earlier said that vehicle sales in Malaysia are expected to drop this year for the first time in six years.

Aishah said in an effort to boost sales this year, MAA will be organising an Auto Fest at the Mines International Exhibition and Convention Centre on May 20–22 to encourage sales leading up to the Hari Raya festive season.

MAA has targeted 20 car brands with over 100 car models to be available for viewing, test drives and sales.

Individual companies will be offering exclusive deals and incentives at the Auto Fest, which can be in the form of direct discounts, a subsidy for interest on car loans or even waivers for down payment, said Aishah.