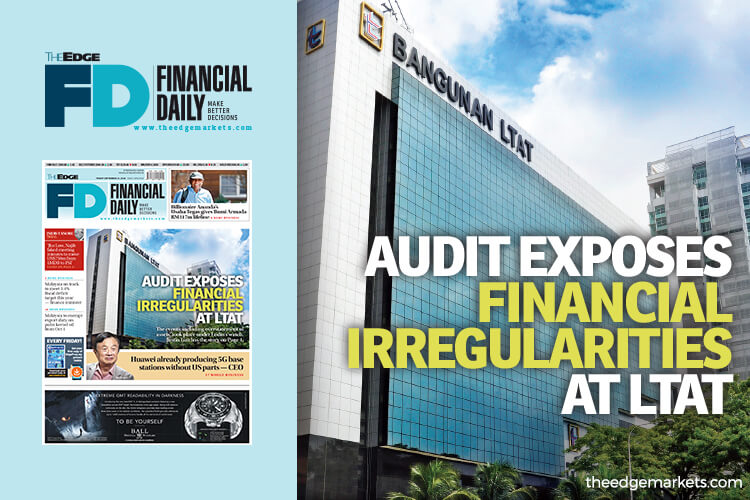 KUALA LUMPUR: The findings of an investigative audit of Lembaga Tabung Angkatan Tentera (LTAT) unearthed significant financial irregularities and weaknesses that took place under the leadership of Tan Sri Lodin Wok Kamaruddin, who stepped down as its chief executive officer in September last year.

“The assessment found that prior to 2019, LTAT accumulated an investment portfolio with substantial risks and asset quality issues. There were also certain past transactions that contained potential irregularities and weaknesses in operational, accounting and legal areas,” LTAT said in a statement.

According to Messrs Ernst & Young who undertook the audit, there were seven key findings determined as a result of the financial irregularities and weaknesses:

1. Retained earnings were impacted due to overpayment of dividend

LTAT’s five-year asset returns from financial year 2014 (FY14) to FY18 (after excluding one-off gains) were lower than the declared dividend rates. This has resulted in LTAT paying dividend at a higher rate than it could afford. To manage this situation, LTAT will develop a reasonable dividend policy, which includes determining a minimum rate of return on its investments. LTAT will subsequently establish a strategic asset allocation framework to meet its minimum expected dividend rate.

This is due to failure to impair one of its large investments when the recoverability of the fund was uncertain after the seller who guaranteed the buyback of shares was declared bankrupt in Malaysia in 2015. Failure to impair the investment has resulted in an overstatement of LTAT’s assets between 2015 and 2017. As a result, an impairment of RM55 million needs to be made in its FY18 results.

3. Due diligence not properly undertaken

Financial and technical due diligence exercises were not properly undertaken by LTAT prior to investing in the above company. It was not based on sound investment policies and procedures.

The assessment also found some issues with unsold property assets worth RM45 million. It relates to 88 condominium units that remained unsold as at December 2018, despite having been completed in FY15. LTAT is looking to expedite the sale of the remaining unsold units. Moving forward, LTAT will carefully consider potential returns and its own expertise in property development.

5. Heightened risk of overreliance and liquidity issues since 2014

There was significant selling of profitable shares and significant increase in LTAT’s shareholdings of Boustead Holdings Bhd and its quoted subsidiaries (BHB Group). This has resulted in over-concentration in a handful of companies under BHB Group’s stable. LTAT’s exposure to BHB Group increased almost 50% from RM2.1 billion to RM3.1 billion while the number of related shares increased by more than 83% from 833 million shares in FY14 to 1.525 billion shares in FY18. To this end, LTAT will undertake a strategic asset allocation initiative as mentioned above.

6. Outstanding dividend from subsidiaries not received

High dividends declared for FY17 by a number of subsidiaries were not paid in full and are still outstanding up to this date. In addressing this, LTAT is re-assessing the ability of its subsidiaries to pay dividend, taking into consideration their respective performance and cash position.

7. Lack of control in unit trusts

The practice of buying unit trusts in order for members to receive special bonus was found to be detrimental to LTAT’s ability to control and actively manage the fund. Neither LTAT nor the members were able to manage their unit trust holdings until the point of retirement. Moving forward, LTAT may consider other avenues of investment that will allow LTAT’s board to better fulfil its key objective.

In a press statement, LTAT chairman Tan Sri Mohd Zahidi Zainuddin said the assessment of the company’s position was undertaken for the period in line with LTAT’s commitment to enhance corporate governance and improve the fiscal health of the fund and its corporations.

“This assessment has allowed us to determine the gaps in LTAT’s operations and move forward to strengthen the fund further for the benefit of serving members and retired members of the Armed Forces,” Mohd Zahidi said.

“LTAT is conscious of the fact that its primary role is to generate sustainable dividends for members of the Armed Forces. The findings of this assessment provide clarity on critical areas that need to be strengthened. This will subsequently place us in a better position to provide a steady stream of returns for the benefit of our members,” he added.

The group went on to say that the assessment, together with the resultant actions taken by the new management, has facilitated in placing LTAT on a stronger footing.

However, it said its short and medium-term outlook “remains challenging”.