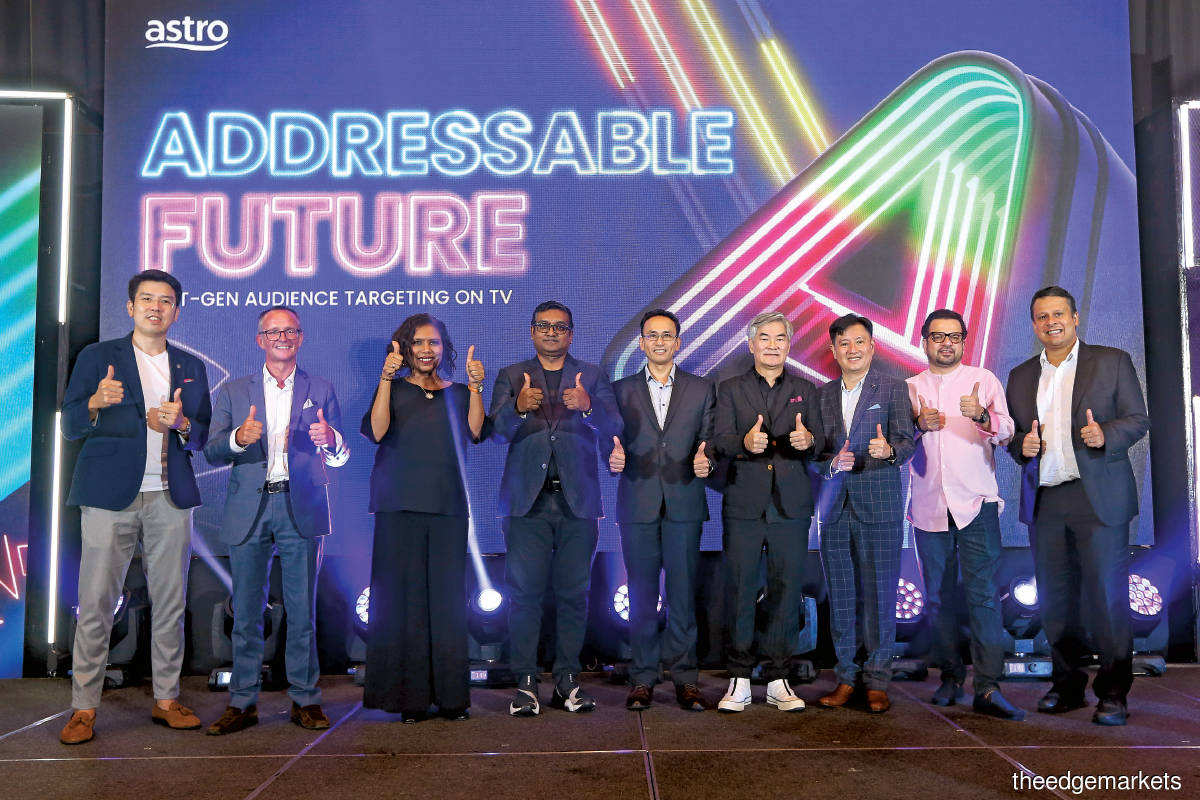 AS pay-TV provider Astro Malaysia Holdings Bhd works harder to defend subscription revenue on the back of rapidly changing consumer viewing behaviour with the advent of on-demand video streaming, it is only natural for it to invest in better technology to harness its first party data and strengthen its value proposition. This is not just to capture the attention of subscribers but also marketers looking to tap its subscriber base.

That 10.7% for FY1/2022 may be small relative to the 73.3%, or some RM3 billion, coming annually from its subscription revenue alone. It is worth noting, though, that Astro would have seen a quarter-on-quarter decline in revenue in the fourth quarter ended Jan 31, 2022 (4QFY1/2022) if not for a significant jump in advertising revenue. Still, a lot more work needs to be done — the year-on-year growth in advertising revenue of about RM21 million for the whole of FY1/2022 to RM448 million was not enough to compensate for the RM186 million or 5.7% y-o-y decline in subscription revenue in FY1/2022.

When officially launching Astro’s addressable advertising solutions on June 14, its group CEO Henry Tan told media buyers and planners that Astro’s overall viewership is “far stronger today than in the past” and that it can now allow ads to be better targeted at its 5.6 million TV customers covering 72% of Malaysian households.

“Using Astro’s first party data, marketers can target their ads to segments based on income, location, dwelling types and purchasing behaviour, thus creating a highly relevant context for advertisers and personalised ads for viewers,” Tan says. He describes addressable advertising as “the next level of TV advertising that merges the best of TV’s emotional persuasion power with smart data, the intelligence targeting capabilities of digital”.

“Today, with smart data and technology, we use data-driven household profiles to build the ideal audience segment and target these audiences with TV. [For] the same programme, you [can] have different ads for different consumers for different homes … To put it simply, Astro’s addressable advertising means catering to each and every different segment of the audience out there with ad content meant specifically for them, regardless of what time of the day it is,” he explains.

The ability to target by interest and fandom is “coming soon”, according to a teaser on Astro’s slides describing the future of personalised advertisements, which are essentially targeted at people that static and enhanced data shows are more likely to sign up or make a purchase.

It goes without saying that a Manchester United football fan would respond better than a Liverpool fan to, say, a Man United-branded credit card. Ditto the dwelling type that a potential Bentley owner is more likely to live in. Sellers, from those selling premium luxury products to small and medium enterprises (SMEs), may also choose to target just a certain type of dwelling and locale and not the whole country.

Astro group chief financial officer Shafiq Abdul Jabbar, who also oversees data and advertising, says last week’s launch was just the first step towards an audience-first, experience-led and data-supported push to “make advertising highly relevant”, not just to advertisers but also to the audience. The scalability of addressable advertising makes it possible for SMEs to access TV inventory for the first time, Shafiq says, adding that viewers are also more likely to benefit from targeted advertisements that reflect their locale and profile.

Astro’s push is coming at a time when advertising executives are facing growing privacy concerns on the internet, which have led to third-party cookies (codes that track a user’s web browsing habits and preferences used to target ads) being eliminated from Mozilla’s Firefox as well as Apple’s Safari browsers, and Google pledging to phase them out from its Chrome browser — estimated to account for at least half of global web traffic — by 2023 (instead of early 2022 when it was initially announced in February 2020).

Privacy breaches do not arise with addressable advertising because Astro is “not selling personal data [but] audiences” and is selling “a pool of people, not individuals”, Shafiq explains. Personalised advertisements do not mean the demise of broad-based advertising, which remains relevant to advertisers, such as those in the FMCG (fast-moving consumer group) segment that have a mass-market appeal, he says. But even for them, there is the possibility of marketing different flavours of the same product according to geography, for example.

There will be more trial and error as data is enhanced to deliver advertisements that are highly relevant to consumers, especially premium subscribers who may not like to see advertisements while streaming videos. Yet, with global streaming giant Netflix looking at introducing ad-supported tiers, it would seem that consumers may have to tolerate more advertising in future.

Going by the experience of markets such as the UK, the US and Australia, addressable advertising solutions may well become an increasingly important feature for advertisers — especially if success among early adopters encourages greater adoption.

Astro’s addressable advertising services, which have been available for video on demand on Astro GO as well as connected Ultra and Ulti Boxes since November 2021, are now being introduced in stages to subscribers of its linear (traditional) TV as well as live channels on Astro GO. It is understood that the rollout is targeted to be completed by October this year.

“Among big and emerging brands that were early adopters of Astro addressable advertising, some have reported a notable improvement of brand consideration [of] as high as 40% and high brand awareness with [a] strong user conversion ratio of 67%,” Astro said in a statement without providing details on the sample size.

As at end-January 2022, about 1.1 million of its subscribers were on connected set-up boxes that are internet-ready and have access to on-demand content.

Astro has not disclosed the split between its premium pay-TV subscribers, NJOI prepaid service and freemium streaming service Sooka, but our-back-of-the-envelope calculations show it having about 2.5 million premium pay-TV subscribers as at end-January this year (5.59 million overall), down from 2.7 million (5.69 million overall) as at end-January 2021.

According to Vivek Couto, co-founder and executive director of Media Partners Asia Ltd, who spoke at the launch, connected TV penetration is 83% in the US, 70% in Japan, 64% in the UK, 57% in Australia and 30% in Malaysia today, but the latter is projected to reach 55% by 2027. Global trends show some linear TV advertising spending being diverted to connected TV, he says, noting that growth in spending on addressable solutions is expected to offset mostly flat advertising spending for television.

Addressable advertising can be done on linear TV, not just connected TV. As it is still early days, existing advertisers in Malaysia may transfer some of their budget to try out the new service while there is good potential for getting new advertisers on board, an industry insider says.

Touching on the “slight decline” in Astro’s overall subscriber base, Tan told marketers at the launch that it still “commands four hours of viewing daily” on average, across various platforms. “So while linear TV has a slight decline, our overall viewership has strengthened with more customers viewing on demand and on-the-go. If you factor that in, we are actually stronger in our viewing today than in the past … People might be surprised but that’s what the data tells us.

“At Astro, we have gone beyond big data. It is now the era of smart data, when we leverage first party data to create relevant personalised experiences while getting valuable insights that help brands build great customer experiences. We believe Astro’s addressable advertising offers winning solutions as advertisers get better conversions and return on their advertising investment. TV, as we know, has evolved beyond the big screen to now, TV anytime, anywhere.

“TV is more extensive than ever before and has evolved to fit into consumer streaming and mobile lifestyles,” Tan says, adding that as part of its transformation plan and streaming aggregation strategy to be Malaysia’s No 1 entertainment destination, Astro has built a platform-agnostic system that generates a rich set of first party data that provides a holistic view of its customers’ video consumption habits across linear TV, Astro On Demand and Astro GO.

“As I’ve always maintained, TV is the most persuasive means of advertising but the way it is measured and reported is outdated. Now, we are putting technology in a premium, trusted environment to make sure that advertisers have more efficient ways to reach their intended customers than ever before [and] having built such robust first party data, we are uniquely positioned to pioneer addressable advertising.”