Asian markets spooked by economic concerns in the West 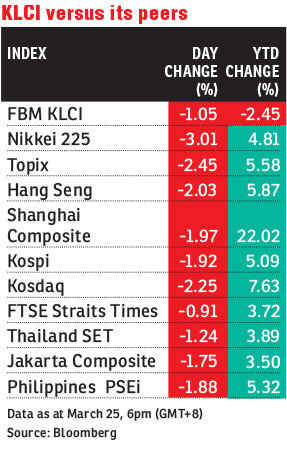 KUALA LUMPUR: Trading floors were shaken in Asia yesterday as fears of a more widespread global downturn heightened last week, after remarks by the US Federal Reserve (Fed) sent the 10-year Treasury yields to its lowest since early 2018.

The fear that gripped investors yesterday was fuelled further when data showed preliminary measures of manufacturing and services activities in the US grew at a slower pace this month than in February, Reuters reported.

The bearish sentiment spilled over to Asia yesterday, most notably in Japan where the Nikkei 225 plunged 3.01% at its close. South Korea’s Kospi declined 1.92%. In China, the Shanghai Stock Exchange Composite Index was 1.97% lower, while the Hong Kong Hang Seng Index retreated 2.03%.

The KLCI appeared rather resilient as it held up with a 1% drop, while most major Asian indices had finished yesterday with a 2% to 3% decline.

Malaysia Airports Holdings Bhd led the sharp fall in the composite index as it sank 36 sen or 4.68% to close at RM7.33. It also contributed to 1.53% decline in the transportation index.

All other sub-indices finished the trading day in negative territory yesterday. Notably, the FBM Small Cap Index lost 156.18 points or 1.22% to close at 12,649.64 points.

Losers outnumbered gainers at 684 versus 191, while 335 counters settled unchanged at market close.

Topping the most actives’ list yesterday was Sapura Energy Bhd. The group declared a special dividend of half a sen per share and it announced the first profitable quarter after six consecutive quarterly loss. Sapura accounted for nearly 13% of the market’s trading volume after 357.87 million of its shares changed hands.

Other energy stocks, for instance, Bumi Armada Bhd and Dayang Enterprise Holdings Bhd, made it to the list as well. As crude prices edged lower yesterday towards the US$65-(RM265.55) level, the ringgit pulled back against the greenback to trade at 4.0690 as of writing.

Speaking to The Edge Financial Daily, MIDF head of research, Mohd Redza Abdul Rahman, said the investors were concerned there is a 30% chance the US economy will head into recession in the next 12 to 18 months, judging from the declining performance of major Chinese economic indicators, leading up to a slew of stimulus announcements, as well as US yield curve inversion.

“While it seems quite unprecedented this time around — considering that the central banks are also a party involved in the bonds buyback — it is generally a concern given that there are other issues that could also cause the balance to tip towards recession,” he added.

Mohd Redza said the Asian markets’ movements, including Malaysia’s, could be further impacted given that the stock index futures are pointing towards a lower start on Wall Street.

However, bargain hunters may emerge. Interests in small- and mid-capitalised stocks on Bursa Malaysia are still strong, judging from the volume traded of 2.78 billion shares worth RM1.74 billion, he added.

Meanwhile, a senior equity markets analyst, who declined to be named, said the current weakness is likely to persist for several days.

“The fall in Bursa Malaysia today is in tandem with the weakness across all regional equity markets, which in turn was spooked by fears of a potential global economic recession. The weak economic data, as well as a change in the tone of the US Federal Reserve with regards to interest rates sparked the selldown, which started last Friday.

“There is some basis for the concerns [of a recession]. Germany recently reported a very weak set of gross domestic product numbers and Italy narrowly escaped a recession.

“And of course, the ongoing US-China trade war will only make things worse. Although the data in the US is still mixed, it was enough to make the guys at the Fed turn more dovish,” added the analyst, who expects investors to be on a “risk-off mode”.