Asean preferred but not Malaysia 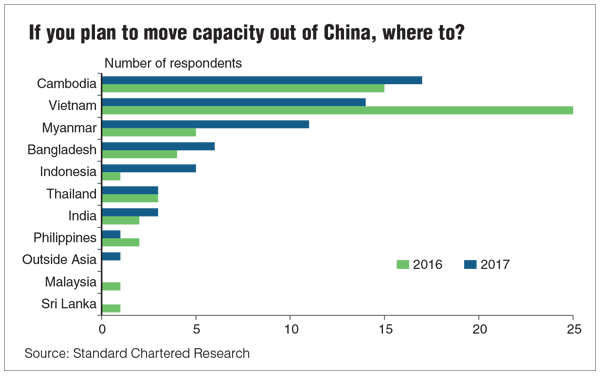 KUALA LUMPUR: Asean remains the preferred destination for China manufacturers looking to relocate their production facilities. However, Malaysia is not the popular destination, according to the manufacturers surveyed by Standard Chartered (StanChart).

“Manufacturers increasingly prefer to relocate production facilities outside of China rather than move further inland (a popular option in past years),” said StanChart in a special report that reveals the outcome of its annual survey of Pearl River Delta (PRD). This is the eighth survey of PRD conducted.

The report noted that the growing intention to move out of the mainland reflects the rapid rise in wages even in inland China cities. The manufacturers surveyed have not yet moved operations out of China.

Among those opting to move capacity overseas, Cambodia and Vietnam are the most favoured destinations, as in prior years, said StanChart.

The report showed that less than five respondents would move capacity out of China to Malaysia in 2016. In 2017, no respondents select Malaysia as the preferred destination to relocate their manufacturing facilities to.

“While Vietnam’s share of the response (23%) is still high, it dropped materially from 2016 (42%) as firms have developed an interest in other Asean markets such as Myanmar and Bangladesh (cheaper labour),” the report said.

“Our respondents also think Cambodia, Myanmar and Indonesia are as attractive as Vietnam in terms of tax incentives and free trade agreement-related benefits,” it said.

In addition, the report said the termination of the Trans-Pacific Partnership trade pact is also one of the reasons cited for investing in Asean.

Since 2015, foreign direct investment (FDI) to Asean has grown at a compound annual growth rate of 12%. Comparatively, FDI has grown 6% globally and 10% in Asia, according to StanChart.

“Asean’s growing domestic market is another pull factor for FDI; this is in line with our positive long-term view on the region,” it said.

“In addition to the manufacturing sector, the financial sector in Asean is attracting FDI, likely as banks follow their clients (such as manufacturers relocating to Asean) into the region,” it said.

A potential US-China trade war tops the list of the manufacturers’ concerns for 2017 — rightly so, in our view — with 60% expecting a high or medium negative impact from such event, the report said.

This is more material than the impact seen from an oil price shock (51%), a hard and messy Brexit (40%) and an escalation of the South China Sea conflict (36%).

“On average, 80% of respondents are exposed to some degree of such geopolitical shocks, prompting over 70% to put in place some form of mitigation or contingency plan for such risks,” said StanChart.