Artisan: Curious, Happy and Dreamy: a tale of two women and three beans 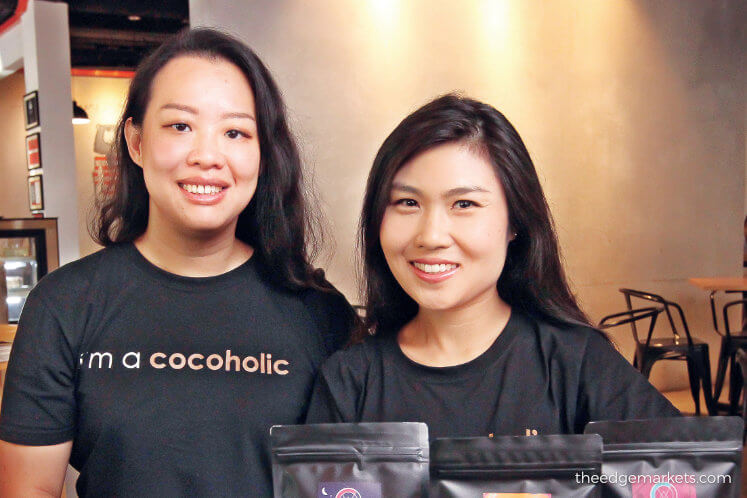 Anyone who professes to be a chocolate aficionado will tell you that good quality drinking chocolate is a rare find in Malaysia. Order hot or cold chocolate at most cafés and what you usually get is either a milky, sugary or cloying concoction without the health benefits and any of the distinct complexity of the star ingredient — cocoa.

But Euniece Quek and Jinli Chan, founders of Sip & Crave PLT, want this to change by getting people to appreciate the unique taste of chocolate that has not undergone severe flavour alterations. They do this by sourcing cocoa from fair trade and single-origin cacao suppliers in Asia and turning it into their leading product, chocolate buttons.

Consisting only of cocoa nibs, cocoa butter and unrefined cane sugar, chocolate buttons — marketed under the brand Cocova — can be melted and consumed as drinking chocolate. But it also works well as an ambrosial snack, with all its natural antioxidants intact.

Sip & Crave gets its cocoa from cacao fruit that has not been subjected to acid-reducing alkalisation — a process that otherwise strips chocolate of its inert characteristics. As a result, the end product retains its astringent and bitter phenolics, the characteristics that yield dark chocolate’s enticing aroma and taste. And very much like wine, sunshine, air, water and type of soil lend the chocolate unique native flavours.

For most of chocolate’s 4,000-year history, it was actually consumed as a bitter beverage rather than a sweet treat. Ancient civilisations such as the Olmecs, Mayans and Aztecs found chocolate an invigorating drink, mood enhancer and aphrodisiac, which led them to believe cacao possessed mystical qualities.

However, this mysticism is somewhat tempered in Malaysia because the available drinking chocolate leaves something to be desired. “The both of us love chocolate, but there are not as many options for drinkable chocolate as there are for edible chocolate,” says Quek, who was a supermarket buyer for eight years with a good grounding in the food and beverage industry.

She had always intended to start a business of her own and felt that the time was ripe to make a foray into the extensive chocolate market. Through an acquaintance, she came to know Chan, then a content producer at Astro Malaysia, who was also looking for a career change.

Their shared love of chocolate led to the setting up of Cocova. The duo started scouting for local and regional single-origin cocoa producers and taste-testing products that they felt would appeal to Malaysians.

They narrowed down their list of choices to three types of cocoa produced in Malaysia, Vietnam and India — Curious, Happy and Dreamy. Curious, a 68% dark chocolate button, which has a slight tinge of acidity and coconut in the tasting notes, was a clear crowd favourite. Happy is 65% dark with an airy, caramelised finish while bitter and intense Dreamy is 72% dark chocolate.

“When we were experimenting, we initially wanted to sell the cocoa powder as is, 100% dark. But the powder was too sour. We needed to incorporate cocoa butter and sugar to make them palatable,” says Quek.

“Our cacao buttons are just cocoa nibs, cocoa butter and cane sugar. So, it is very suitable for vegans — a growing community here — and for those who are lactose intolerant. Everyone can enjoy a good, frothy cuppa with, say, almond milk or coconut milk.”

Essentially, they did not want to go down the commercial drinking chocolate route, Chan declares. “The antioxidants are higher in natural cocoa than in commercial couverture chocolate, in which manufacturers add emulsifiers, milk powder and additives. We just wanted to bring chocolate back to the bare minimum, raise awareness and create an appreciation for good quality chocolate.”

Quek says, “The stereotype is that women are most attracted to chocolate. We thought that was the case too. But now, we know better. We have had so many men asking to buy chocolate as well. Increasingly, many people have stopped consuming coffee after 4pm because of the caffeine, and they do not mind this alternative as it can be consumed with or without milk.”

While their chocolate buttons can be consumed as snacks, Quek and Chan’s initial intention was to introduce an alternative to the drinking chocolate cluster. But this is proving to be a challenge as the domestic market is saturated with sugary variants. Unlike speciality coffee, which has gained prominence in the last decade, most people are not yet accustomed to drinking cocoa that has not been treated.

“Initially, most people who tried our testers did prefer slightly sweeter ones. That was why we dropped the 100% version and focused on these three — Curious, Happy and Dreamy — which are still dark chocolate, but with added natural cane sugar,” says Quek.

“There is enough sweet chocolate out there, but there are not many options for those who want something bittersweet or different. Also, more people are moving towards non-sugar versions, preferring to add their own. Some have even completely removed sugar from their diets as Malaysians are becoming more health-conscious.”

However, the growing trend of bean-to-bar chocolate, where chocolate makers source cocoa beans directly from farmers to be made into single-origin chocolate, is shining a spotlight on a crop that has lost out to other commodities. “First it was coffee and then, we saw a proliferation of matcha. We know that chocolate is still very new. But because of my background as a purchaser, I know there is plenty of good quality chocolate out there. It is just not easily accessible here,” says Quek.

“Many growers diversified from cacao to oil palm in the 1980s, but a few farmers are starting to revive demand by embarking on fair trade practices so they can get quality pricing for their goods and be able to provide their workers with a decent livelihood.

“All over the world, there are so many artisanal chocolate companies that are coming up with different types of chocolate bars. This trend is here to stay because people want alternatives and more are willing to pay a premium if the supply chain is ethical.”

That is why the duo make it a point to keep tabs on their suppliers’ growers to ensure that their supply chain continues to adhere to fair-trade practices. “It is just going to take us a bit more time to build the market. But I believe that one day, we will get there as more people start to appreciate good quality chocolate that is value for money,” says Quek.

“Curious, which is from Melaka, is the favourite. The taste profile is very different from commercial chocolate because although the cacao goes through a fermentation process, it does not go through any roasting or alkalised processes. So, the customers are able to get the original taste of cocoa extracted from the fruit.”

With more growers embracing the potential of cacao, Quek is positive the company will be able to make a significant difference in domestic demand and raise international awareness of the varieties of cocoa produced in Asia. That is why the duo chose “Cocova” over a more local-sounding brand name.

“We wanted a name that anyone around the world could pronounce and recognise as a chocolate product,” says Chan. Cocova is derived from the Lithuanian word for cocoa — kakavos.

They got cracking on cultivating their network and started doing market validation at the beginning of last year. “We did some simple online surveys and surveys among our friends to ask them what they normally ordered at cafés. The majority agreed that they could not get any good quality hot or cold chocolate drinks. Most said the drinks were either too sweet or too bland and we felt that we could do something about it,” says Chan.

“Since there was a market for good quality drinking chocolate, we decided to take the plunge,” says Quek.

They tested their theory in December last year, when they rented booths at pop-up Christmas bazaars in Kuala Lumpur. The reception was “so good” that they started running out of buttons to make into drinks halfway through the festive season.

Although many who tried the testers found the drinks made from the three variants rather sharp, when they learnt from the duo that this was the original taste of cocoa, many were keen to buy the buttons so they could make their own drinks at home, says Chan.

It was then that they received feedback that some found it cumbersome to make the drinks themselves as the drinks made at home tasted different from the testers. “The milk that you are using cannot be too hot. It has to be gently simmered and cooled slightly before being poured onto the buttons. Otherwise, you will have a grainy drink,” says Quek.

Of course, using powdered cocoa would be easier, but the end product is usually too bitter or sour as the cocoa powder has very little cocoa butter in it. Cocoa powder generally contains 10% to 12% cocoa butter compared with 55% in pure unsweetened chocolate.

This feedback resulted in another product — bottled drinking chocolate using Cocova buttons. “We only started selling the ready-to-drink version in January, but the demand has been really good,” says Chan.

Now, the duo is approaching cafés to substitute their drinking chocolate with Cocova’s buttons. “Again, there is a lot of education needed because this is not commercial chocolate. Café operators have to take time to explain the difference in taste to their customers or people will be sending their cups back, thinking the milk has gone sour,” says Quek.

As they are ramping up their marketing efforts, they intend to get halal certification for their final products. As it stands, their manufacturers are halal-certified. They are also looking at organic cacao growers and hope to continue their sustainability efforts.

“Nowadays, when people ask me what I do and I tell them that I sell chocolate, their eyes light up. That is the effect of chocolate. It is such a mood booster,” says Chan.

Quek says, “We can confidently tell you that once you try good, artisanal chocolate, you will find it very hard to go back to what you are accustomed to.”