Architect of his own serenity 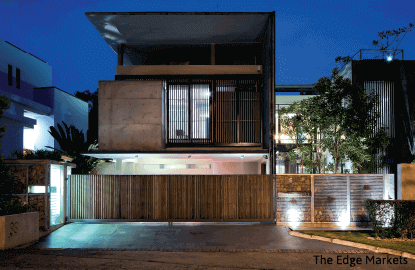 This article first appeared in haven, The Edge Malaysia, on Issue #77 February + March 2016. 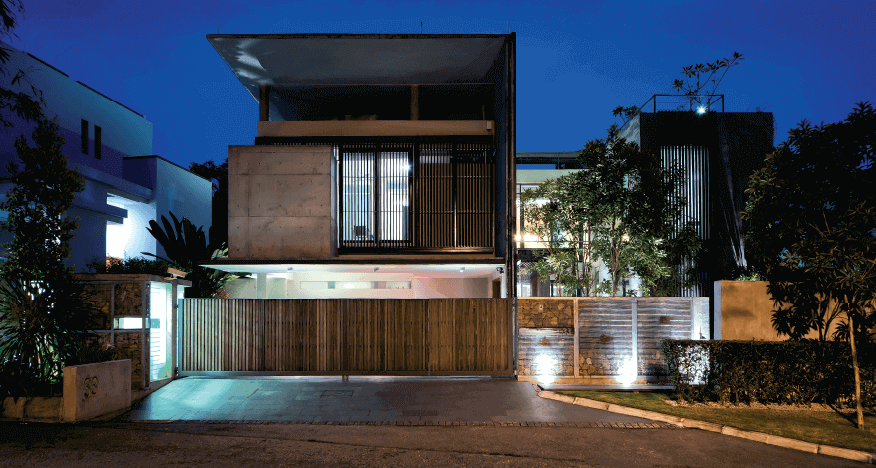 A house is usually an apt reflection of its owners’ personal style, even more so when the homeowner is himself an architect. Hud Bakar’s abode in a leafy Damansara cul-de-sac embodies his philosophy of minimalist interiors and eye for detail. “Anyone who knows me knows I will not go for flamboyance or gaudiness,” says the director of RSP Architects over a cup of tea. “And definitely no Roman columns. I simply don’t do that.”

Instead, the austere columns on the first floor of his split-level bungalow are built from the same off-form concrete that fashions the corresponding ceiling and a feature wall with perforations, all left unfinished. Contrasting plastered and painted walls prevent the interiors from looking too industrial, creating a dialogue between the clean and the raw. “I wanted to keep it true to its construction,” he says of the honest materials. Furniture is eclectic, inclusive of an iconic Eames lounge and ottoman set as well as a pair of leather Archibald armchairs by Paltrona Frau. A rug and art on the walls, most of the latter the works of his three children, soften the visual.

However, one need only turn towards the full-height glass windows to understand how Hud effortlessly pulls off the minimalist approach here: the view does a lot of the talking. Immediately upon entering his house, a journey that includes crossing a timber bridge set over a “moat” that in reality is a sunken koi pond on the level below, the vista of the trees and the towers that form the Mont’Kiara and Damansara skyline arrest one’s attention. “It has great dramatic effect — you know lah, an architect’s house,” laughs the    owner, who enjoys the hillside location for affording him this advantage. “On clear days, you can see as far as Genting Highlands.” 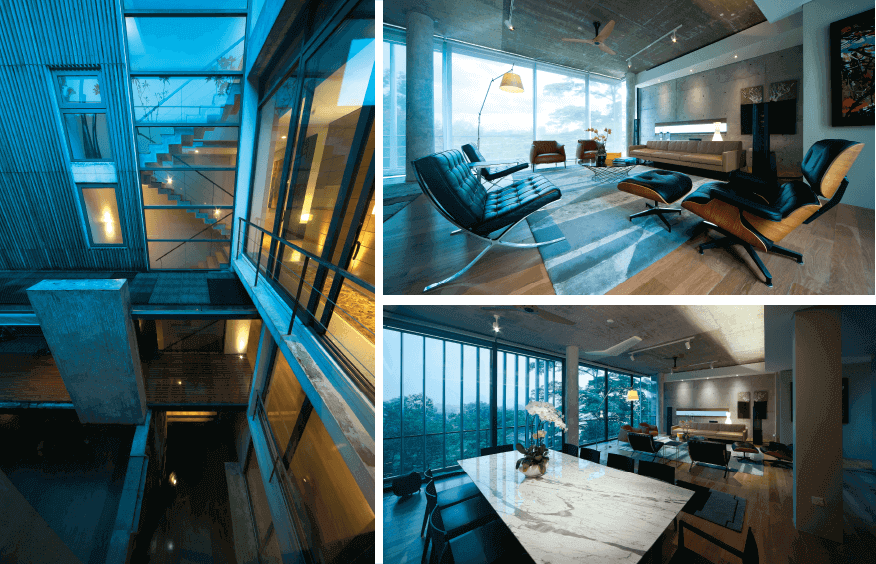 The living room and dining area share the view in this open layout while a divider discreetly cordons off the kitchen and adjacent den. The understated yet homely thread continues here with built-in appliances preferred for their seamless surfaces in the kitchen and L-shaped seating maximising the cosy corner that is the den. Mechanised louvres, found at every window of the house, keep the heat of the sun at bay, a necessary inclusion with such liberal use of glass.

Just off the dining area are concrete steps leading down to the entertainment area and backyard as well as up to the bedrooms. Hud created texture and contrast with the stairs themselves, laying timber planks atop the concrete. The margins of the former are narrower than the latter, infusing the threads of the stairs with a three-dimensional effect as the concrete peeks out from below the planks.

Set below street level with a backyard that overlooks the city spread out below, there is a sense of privacy about the ground floor entertainment area. To create a greater illusion of space, Hud introduced the koi pond at one side, distancing the wall from the immediate border of the living room to make it seem larger and airier. Across the room, full-height sliding doors open out to the patio, backyard and pool. This arrangement encourages cross-ventilation as a regular breeze traverses the room from the backyard and exits via the double volume skylight of the pond. This spot is a favourite among guests for shooting the breeze, karaoke and movies with a pull-down projector screen at the ready. 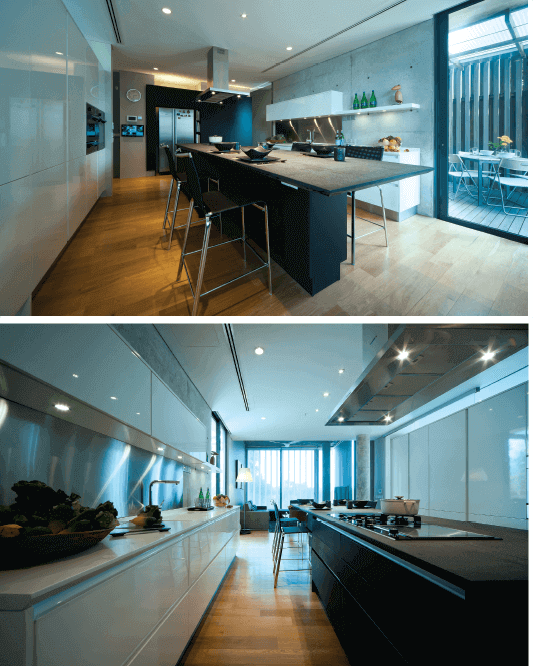 Children usually flock to the backyard, drawn to the saltwater pool. Between the patio and the pool deck is a squarish gym, glass walls optimising the serene surroundings. It seems at once connected and yet separate from the house, the effect subtly achieved by the use of concrete borders and plants. Basic equipment, from exercise machines to kettlebells, fills the space.

On the second floor are the bedrooms. Those belonging to his eldest son and daughter are immaculately tidy, perhaps by virtue of their occupants being overseas most of the year. Each features the huge windows ubiquitous to the house and their own artwork on the walls. The master bedroom practices the same simplicity preached in the public areas with sparse furniture and a glass-encased bathroom executed in natural grey travertine and off-form concrete. Hud points at two inconspicuous sliding panels currently pushed away from the glass walls. “We wanted something to block out the glare of light from the bathroom at night in case my wife or I were sleeping when the other wanted to wash up,” he says. A walk-in wardrobe continues in the space beyond. Meanwhile, a connecting door from the bedroom leads to the attached lounge-cum-study, which also has its own main entrance and is often used as a makeshift gathering space for the family. 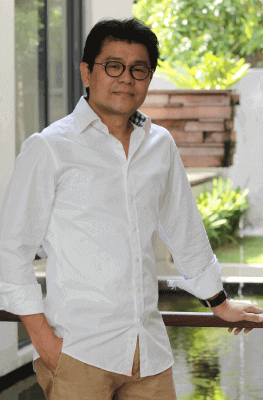 A final flight of stairs leads up to a winning feature of the house — the rooftop garden, whose assets include a clear view of KL’s skyscrapers. Hud says it is a favourite at dusk when streaks of colour paint the sun’s farewell as well as during festivals when the sky is lit up by fireworks around the city. The garden occupies a portion of the rooftop area with a divider separating it from the adjacent drying yard. “One of my wife’s few requests when we built the house was for a dedicated laundry room,” he laughs. This is tucked away on the same floor, thus keeping all laundry activity out of the way of the living areas.

Hud and his family lived in the two-storey house that once stood on these grounds years ago before moving into the first home he designed for them in Tropicana. When they decided they could do with a smaller house as the two elder children were often away, Hud decided to return to this location, knocking down the original house to erect his own design.

A study of the exterior actually alludes to the clever architecture and eclectic harmony within. The façade blends timber, plastered bricks and glass fronted by louvres while the sombre attached garage, sloping below street level at the right corner of the property, is topped by a flowering garden. When opened, the garage reveals Hud’s fervour for two and four-wheeled rides, including a collection of seven cars. A large painting splashes colour onto the walls and stairs fitted against the slope lead down to the backyard. “It’s ideal for parties when you have a canopy set up,” says Hud. “Instead of going through the house and reaching the backyard without footwear, guests can keep their shoes on by accessing the lawn through the garage.”

Such detailed thought is evident in the practicality of the structure. “There are no pretentious elements here,” Hud continues. “It’s a very liveable house and requires little maintenance: the unvarnished timber will age with the house and concrete doesn’t need much care. Every corner serves a purpose, so no space goes unused. I want to keep every room functional but simple. Simplicity is actually very hard to achieve as it requires a great deal of thought. I like what we have done so far but I don’t think it’s complete yet. I have a lot of ideas for the house. It might be the downside of being an architect: you always see something to improve. This is going to be a perpetual work in progress.”