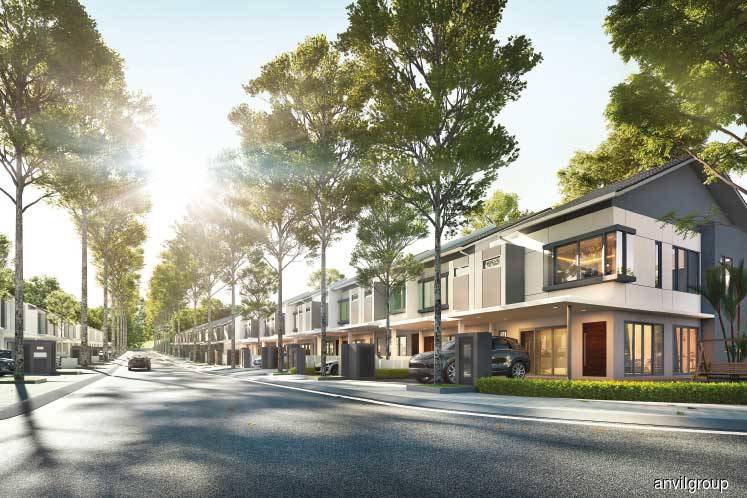 as well as the newly completed clubhouse Even with the presence of Universiti Kebangsaan Malaysia, Bangi had long been a relatively quiet area. In recent years, however, the Selangor town has seen several property developers embark on projects, most of which are sizeable developments of more than 10 acres each.

Joining them is Anvil Group, a relatively new property developer. It owns some 70 acres of freehold land in Bangi, according to general manager Chan Ze Hong.

The group has utilised part of its land bank for its maiden project, Lambaian Residence. Located a stone’s throw from Universiti Kebangsaan Malaysia and the German-Malaysian Institute, the 10-acre gated-and-guarded development comprises 56 semi-detached homes and bungalows as well as 24 townhouses. The units were completed and handed over to buyers last year and all units have since been sold.

While it is new to the property development scene, Anvil Group has been involved in the property industry — specifically, the construction sector — for almost 40 years, specialising in road, bridge, building and infrastructure works through Group Link Construction Sdn Bhd.

Its construction projects include the commercial units at Cahaya Business Centre in Banting, Selangor; commercial and residential units in Taman Sepakat, Banting; and 2-storey landed houses in Shah Alam and Klang in Selangor.

The group also has a plantation division, with palm oil estates in Malaysia.

Following the positive response to its maiden project, Anvil Group plans to launch Residensi Lambaian Dua, which is located next to Lambaian Residence. The 30-acre project has a total gross development value (GDV) of RM262 million.

Residensi Lambaian Dua will have a clubhouse with facilities such as an infinity pool, gym­nasium, multipurpose hall and lounge. There will also be two ponds, a yoga deck, children’s playground, gazebo, jogging track and garden.

“The buyer demographics for Residensi Lambaian Dua and Lambaian Residence are similar — mostly owner-occupiers from Bangi and the surrounding areas such as Kajang, Seri Kembangan and Putrajaya. It is a freehold land, adding to the attraction of these properties,” he remarks.

Chan says the unique selling point of Residensi Lambaian Dua is its emphasis on the design of space to provide convenience and value. One example is the full extension of the back of the house, so that residents would not need to do any renovation.

“Other than the project architect, we have also hired a design architect to look into the design. For example, rather than just a window latch, we will have a window bay where residents can sit and read a book or relax. Also, our porch will be long enough to fit four cars, even at our terraced homes,” he adds.

“Our semidees will come with a powder room and every room will have an en suite bathroom, including the guest bedroom. It is about privacy and value for money. For the terraced homes, there will be a yard where sunlight can come in so that residents can hang their laundry there.”

Anvil Group brings in different designs and offerings at its townhouses, says Chan. Instead of the usual 1½ or 2 storeys, the townhouses in Residensi Lambaian Dua will only have 1 storey for each unit. Whether it is on the ground floor or first floor, each unit will come with a central courtyard, providing more ventilation and natural lighting.

“We realise that many people don’t want to climb a lot of stairs, so we have only one floor but with bigger built-ups. With the smallest built-up being 1,283 sq ft, the units will be larger than most apartment units,” he points out.

“It will also not be a conventional townhouse as even the intermediate units will have more light and ventilation because of the central courtyard. This design will allow residents to do indoor gardening.”

Kew says another unique selling point is the clubhouse and facilities that will be available within the gated-and-guarded compound. The units at Residensi Lambaian Dua are expected to be fully launched by 2021.

The development is accessible via the KTM Komuter train service at the UKM Station. There is also a new access road within the development that is connected to Jalan Bangi Lama which, in turn, is linked to the Kajang-Seremban Highway (Lekas Highway).

Anvil Group has a 12-acre parcel next to Residensi Lambaian Dua and Chan says the company plans to build commercial and high-rise units there. It also has a five-acre parcel nearby, which is slated for a high-rise development.

Anvil Group is looking to launch a landed home project in Puchong South, Selangor. A joint venture with the landowner, the development occupies three acres on which the group plans to build 41 two-storey terraced houses, which will be launched by early 2021.

With a GDV of RM28 million to RM30 million, it will be a gated development with a children’s playground.

The developer is also scouting for more land bank, especially south of the Greater Klang Valley. Chan says it is looking at mature areas and there are currently a few ongoing land negotiations.

“For now, we are focusing on developing landed homes because it is the most popular product. The land we are scouting for are for both landed and high-rise developments.

“Also, we have a vacant land in Pudu, which we plan to turn into a commercial storage space,” he reveals.