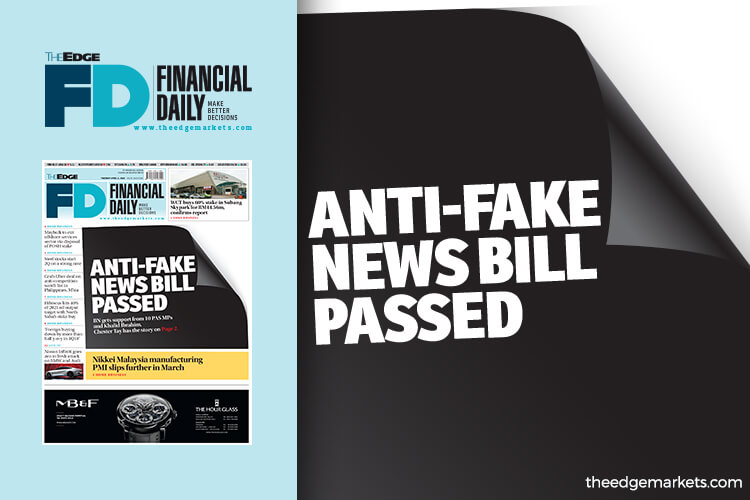 A total of 112 BN MPs voted for the legislation carrying stiff punishments of up to six years in prison and a maximum fine of RM500,000 — in a bloc vote after the second reading of the bill.

Ten PAS MPs also voted in favour of the bill, along with Khalid, the former Selangor menteri besar who was previously with PKR.

Another independent member, Kota Melaka MP Sim Tong Him, joined 63 Pakatan Harapan MPs in voting against the bill. Sim was previously with the DAP.

After the vote, the bill proceeded to the committee stage where two amendments were approved. The bill was then approved through a voice vote after a brief debate.

The bill will next be brought to the Dewan Negara for debate and approval prior to being gazetted as law. The upper house of parliament is currently sitting concurrently with the lower house.

The two amendments made at the committee stage were replacing the word “knowingly” with “maliciously”  in Clause Four, and cutting the maximum jail term from 10 years to six years in Clause Five.

Minister in the Prime Minister’s Department Datuk Seri Azalina Othman Said, in her wrap-up speech after the second reading, insisted the Anti-Fake News Bill is not aimed at limiting the freedom of speech.

“As stated in the explanatory statement of the bill, this law is not intended to restrict the freedom of speech but to restrict the dissemination of fake news,” she said.

Azalina said even though the Federal Constitution provided for freedom of speech, it is not an absolute freedom, and the Dewan Rakyat has the power to introduce controls on such freedom in the interest of public order, security and morality, or to provide against defamation or incitement to any offence.

On complaints that the government is rushing to come out with the law, Azalina said this is because the rapid advancement of technology has enabled rapid fake news dissemination and created major issues globally.

“If not now, when? This is a global issue and it is affecting a lot of us, as brought up by many of our colleagues, especially from this side (BN),” she said, adding that several other countries are implementing similar controls, including Singapore, Germany, France and the Czech Republic.

On allegations that the bill is meant to help the BN win the upcoming 14th general election amid alleged uncertainty on the party given the power to interpret the law and decide if an information is fake or not, Azalina said the bill clearly states the court is given the power to make the decision.

“The court has the power; not any ministry or government agencies. This is unlike the Internal Security Act, [initiated] by our former leader and which has since been removed, which did not provide that power to the court,” she said.

“The bill is meant to enable a party that is neutral and just to decide whether a specific news or information is fake or not.”

Azalina then compared the Anti-Fake News Bill with several controversial decisions made by the government during Tun Dr Mahathir Mohamad’s tenure as prime minister, such as the 1988 constitutional crisis that resulted in the suspension and eventual removal of Lord President Tun Salleh Abas.

The minister also cited the detention without trial of politicians and civil rights activists under Operasi Lalang in 1987.

Azalina said the proposed anti-fake law should not be seen as redundant but as complementary to existing laws.

On the extraterritorial application of the law, Azalina said this is because it involves a borderless crime.

“People committing an offence under this law will only be charged when the person is in this country or after being brought to this country through an extradition process.”

On the danger of selective prosecution, Azalina assures this will not happen as the prosecution will only take place after a comprehensive investigation.

“A person is innocent until proven guilty under this law,” she said.

“The conviction and sentencing of an accused person is determined by the court, [and] not the prosecutor.

“The commencement of a prosecution does entail consequences for a person accused of an offence, even if he is acquitted. But such consequences would arise in any legal system, and can be minimised only by a trial conducted as efficiently and fairly as possible.”

As to who would take action against the public prosecutor or attorney-general himself in the event he omits to act against the spread of fake news or information, Azalina, quoting Section 40a in the Eleventh Schedule of the Federal Constitution, said the solicitor-general will be the party undertaking the responsibility.