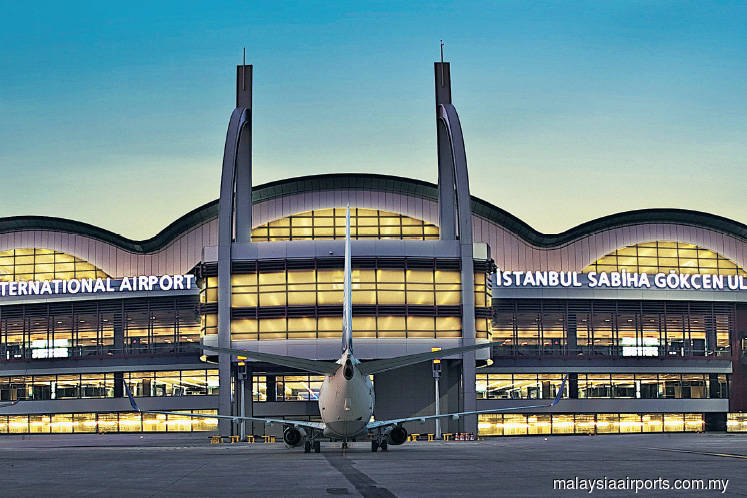 WITH a third divestment abroad highly likely, 2018 appears to be the year that Malaysia Airports Holdings Bhd (MAHB) scaled back overseas to regroup at home. The many challenges MAHB is facing domestically may explain why it is recalibrating its focus and resources back to Malaysia as, locally, the airport sector is heating up.

The question is whether its international forays came at an opportunity cost at home. With the recent signal from the government that there will be more low-cost carrier terminals going forward, MAHB’s reduced role overseas may be perceived as redirecting resources to focus on LCCTs at home — to some, a strong indictment of its shortcomings at home. In other words, the focus will be on whether the ventures abroad were at the expense of investing in local airports. Whether its international forays are ultimately rewarding will be questioned too.

Having exited the Maldives and India this year, MAHB is getting interest for its wholly-owned Istanbul Sabiha Gokcen International Airport (ISG) in Turkey, where recent political developments have culminated in a lira crisis.

Reports say Turkish Airlines wants to pay €750 million for 80% of ISG. A sale at that price would be MAHB’s third and biggest overseas divestment this year, at a time when the temperature is rising on multiple domestic fronts for airport operators.

Operating 39 out of 40 current Malaysian airports, MAHB is expected to bear the brunt of the turbulence.

For starters, the Quality of Service (QoS) framework rolled out in May — adding pressure to keep up airport service quality where there was previously almost none — will impose financial penalties for subpar service from September.

Additionally, The Edge understands that AirAsia is currently negotiating a service agreement with MAHB.

One expected outcome is for written terms for financial recompense for disruptions that affect AirAsia’s operations — a good deal will nudge other airlines to ask for their own agreements.

A recent example is the one-month closure of klia2’s third runway from May 11. People familiar with the situation say AirAsia was not compensated despite an increase in flight delays, among other issues.

Looking at the bigger picture, MAHB’s long-established dominance is also under an existential threat as the government has hinted that the structural monopoly is not sacrosanct.

The federal government has openly courted private sector proposals and money to fund airport expansions, with a new LCCT planned for Penang.

One risk is the carve-out of terminals for new operators in exchange for funding expansion. There is a carve-out precedent: Senai International Airport in Johor used to be MAHB’s to manage but is now run by a unit of MMC Corp Bhd.

Apart from the possible impact of having a terminal carved out of its stable, another hypothetical risk is that a more efficient operator may further expose MAHB’s shortcomings.

All these challenges spell an increasingly difficult operating environment for MAHB in Malaysia going forward.

The Edge has repeatedly requested an interview with MAHB since last December without success.

In July, Datuk Badlisham Ghazali retired as managing director, and his duties were taken over in an acting capacity by chief financial officer Raja Azmi Raja Nazuddin.

MAHB is no stranger to criticism since its corporatisation in 1992. Much of it is aimed at what is seen as its lax approach to many issues, including service quality and airport development strategy.

Passengers regularly complain on social media about poor service. For example, a notable aerotrain breakdown last year was lambasted as being preventable with pre-emptive maintenance.

At the same time, some airlines — most notably low-cost carrier AirAsia Group — chafe at what they say is MAHB’s disregard for their input in mapping out a long-term strategy together.

Note that low-cost carriers (LCCs) have grown tremendously in the last decade. Since 2007, the LCC’s share of intra-Asean seats has risen from 32.1% to as high as 57%, according to data from the CAPA Centre for Aviation up to 2016.

It is clearly sensible to  work closely with LCCs without neglecting full-service carriers. Yet, a long-standing criticism by AirAsia is the MAHB’s direction has shackled the former’s growth.

Last year, AirAsia and MAHB publicly quarrelled about whether there should be more LCCTs around the country — while AirAsia wanted additional (cheaper) terminals that allow for lower airport taxes, MAHB did not agree to adding terminals as it pushed for unified hubs instead.

Underlying much of the grumbling about MAHB’s shortcomings is the lost opportunity over the years to develop the Malaysian airport sector into an aviation hub at par with, if not better than, Singapore and Bangkok.

At the heart of the issue is whether MAHB should have focused more resources locally and how that could have uplifted the local airport industry.

While there has been a noticeable shift in MAHB’s attitude in recent months, it remains to be seen if it can catch up and recover lost ground.

One example is airport upgrades. Mavcom, the aviation regulator created in 2016, previously highlighted that many major airports are bursting at the seams and need urgent expansion.

While upgrades are typically the responsibility of the government, it is not uncommon for MAHB to foot the bill first and claw back the costs from the government’s user fee share of its revenue later.

In that vein, the argument is that some of its international investments could have been channelled into investments in local airports.

Malaysia certainly does not lack a geographical advantage, sitting smack in the heart of Southeast Asia — one of the fastest-growing aviation markets in the world.

That said, analysts The Edge spoke to indicate that MAHB needs to be both local and foreign-centric to remain a credible airport player. The question then is whether it has paid enough attention to its domestic base.

By MAHB’s own admission, 75% of its 39 airports are not commercially viable. Leaving aside five international and 16 domestic airports, 18 are short take-off and landing (STOL) airports — basically landing strips in rural areas.

An analyst tells The Edge that MAHB could have worked harder at some domestic airports to achieve break-even at least but lost focus along the way. For example, a strategy that focuses on developing more airports as key hubs could have pushed that agenda further.

In a nutshell, MAHB wants to develop KLIA into a regional hub and gateway into Malaysia. It is also undertaking a larger aeropolis development surrounding KLIA.

Also notable in the plan is MAHB’s Total Airport Experience (TAE) initiative. TAE essentially seeks to uplift the passenger experience at KLIA digitally and use that, among others, to boost retail revenue at the airport with targeted advertising using big data analytics.

In short, MAHB appears to be moving towards making flying an increasingly premium experience in contrast to calls by some of its critics, such as AirAsia, to make it cheaper with LCCTs.

That resonates with much of the passenger dissatisfaction with MAHB. Take the anecdotal complaints about inadequate trolleys from time to time and unclean toilets, alongside the uproar over higher passenger service charges instituted by Mavcom.

Together, the dissatisfaction paints a picture of a public that perceives MAHB as more focused on profit than improving its service levels. It could be argued that its monopoly may have drawn less resentment had MAHB done a better job in Malaysia.

With a new government now apparently open to breaking up MAHB’s structural monopoly, time will tell if it can still make up for the lost opportunities and start getting its domestic act together.