LEGEND has it that in 1870, German immigrant Charles Feltman invented what we know today as a “hot dog” when he started serving sausages in rolls in New York’s Coney Island. At that time, Coney Island was the premier holiday destination for New Yorkers — not only was it easily accessible, it was also home to amusement parks and a seaside resort.

During its heyday in the first half of the 20th century, Coney Island was also home to some of the country’s most popular food stands — one of which was Nathan’s Famous hot dogs.

Founded in 1916 by Polish immigrants Nathan and Ida Handwerker, the hot dogs were made from a secret recipe handed down through generations, and were sold at half the price of other stalls.

The Handwerkers’ hot dogs proved to be a hit. Their modest stall soon expanded to cover an entire city block, with eager hot dog lovers visiting from all over the country. Over the years, famous personalities such as Al Capone, Cary Grant, Frank Sinatra, Franklin D Roosevelt, Jacqueline Kennedy and Queen Elizabeth have come to taste the legendary hot dogs of Nathan’s Famous.

Fast-forward to 99 years later and Nathan’s Famous has now reached Southeast Asian shores. Its first outlet in the region was recently opened in IOI City Mall, Putrajaya, where it overlooks a skating rink and is flanked with enormous floor-to-ceiling windows to give patrons a lovely view of lush greenery outside.

Urban Fun Sdn Bhd brought Nathan’s Famous to Malaysia, and its chief executive officer Tunku Karldej Tunku Shamsul Bahrin told the story of how his family was on vacation in New York when his son discovered the hot dogs and made his father and grandfather fans of the frankfurters as well.

“If you want a taste of New York without getting on a plane, this is the place to get it. Nathan’s Famous is well known for serving great-quality food that is affordable and within convenient reach of customers,” said Tunku Karldej at the outlet’s opening earlier this month.

“While some may argue that the recent burger boom may have saturated the market and left consumers spoilt for choice, Urban Fun believes that the frankfurter market is still underserved.

Unlike other fast-food joints, Nathan’s hot dogs are made to order, so cold or soggy meals will not be served. The menu consists of dozens of all-American-style hot dogs such as the Philly, chilli and cheese, and bacon bits with cheese. Every set meal also comes with crinkle-cut fries with five yummy toppings and the signature fresh lemonade — made from imported lemons.

Urban Fun plans to expand its Nathan’s Famous outlets at the rate of two to five new ones per year over the next five years. Not all of them will be restaurant-style, though. Some will be small kiosk-style outlets.

“This is a once-in-a-lifetime opportunity to partner with an iconic 99-year-old brand with a proven track record and has already demonstrated broad appeal in many other markets globally. The Nathan’s business model and menu offering are both flexible and easily modified to suit a variety of business sizes from full-sized standalones to in-line restaurants, mobile trailers, food court stalls and carts. In short, it’s a multi-tier business opportunity that presents entrepreneurs with a chance to own their own business at varying investment levels,” Tunku Karldej explained.

Aside from its signature frankfurters, Nathan’s Famous is also renowned for its annual hot dog eating contest which takes place on July 4 at the original outlet in Coney Island — the biggest hot dog eating contest in the world. It has drawn unprecedented media attention in recent years, and is the fifth most-watched telecast of the year on the ESPN channel.

Obviously, such a well-loved tradition will hit our shores sometime in the future. Tunku Karldej promised Malaysians our own Nathan’s Famous hot dog eating competition but in the meantime, Nathan’s Famous promises to bring a taste of New York to Malaysians. 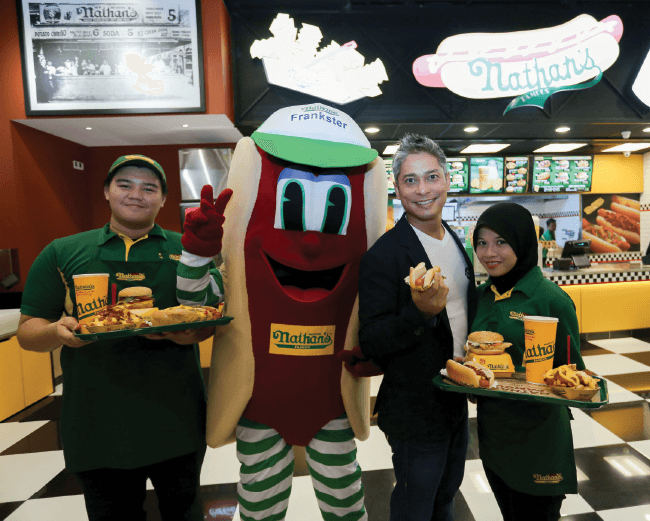