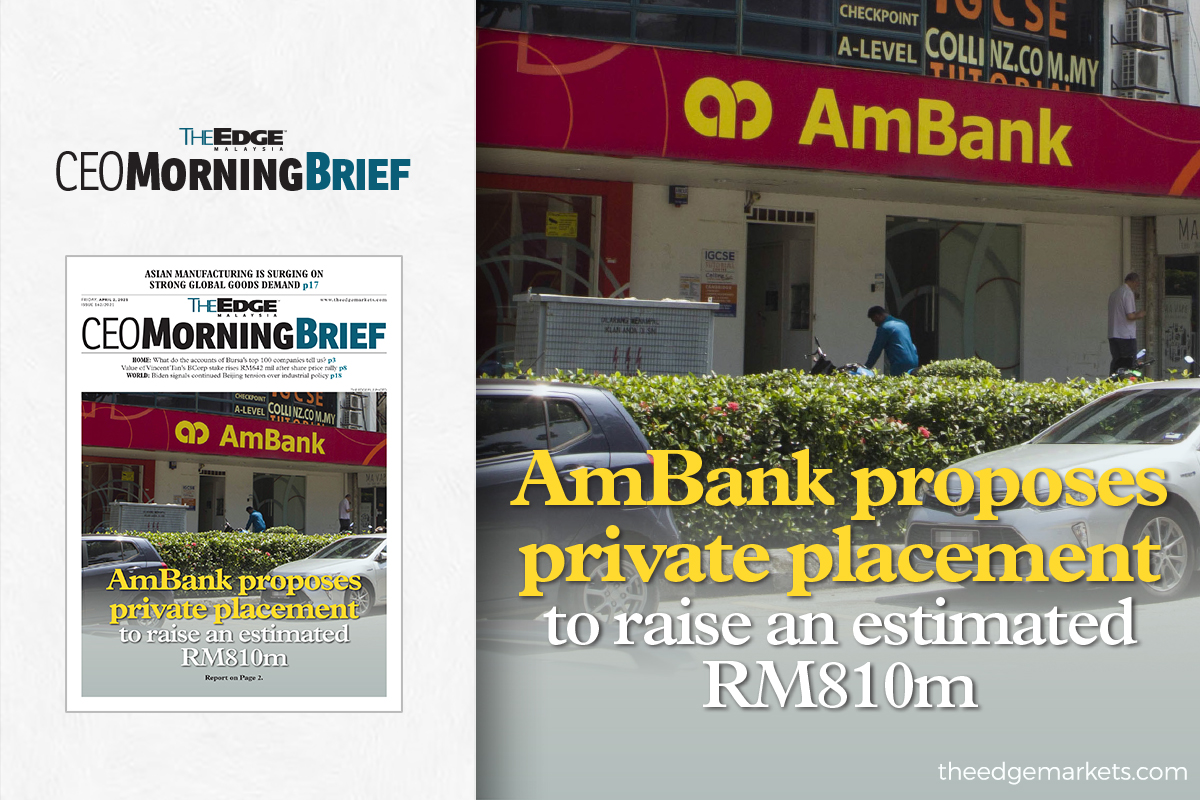 KUALA LUMPUR (April 1): Following its RM2.83 billion settlement with the government in relation to the 1MDB scandal, AMMB Holdings Bhd (AmBank) has proposed a private placement to raise an estimated RM810 million.

The group said it plans to issue up to 300 million new shares or 9.97% of its current share capital to raise additional funds to strengthen its core capital ratios, including Common Equity Tier 1 (CET1) and Total Capital Ratio (TCR).

"The proposed private placement allows the company to raise funds expeditiously, as it can be implemented immediately," Ambank said in an exchange filing.

It will also improve the group's liquidity and financial flexibility by strengthening its financial position without incurring interest expense as compared to borrowings, the group added.

Ambank announced the RM2.83 billion settlement with the Ministry of Finance on Feb 26 in relation to historical transactions involving the banking group with 1MDB and its related entities.

"Consequently, for the financial year ended March 31, 2021, Ambank will be recording a RM2.83 billion provision and will not be proposing any final dividends," the group said.

AmBank stressed that it remains resilient with capital levels within the internal thresholds, after taking into account the effects of the 1MDB settlement.

“The group’s franchise remains viable and the additional capital will facilitate the implementation of growth strategies to deliver value for its shareholders,” it said.

For illustrative purposes, AmBank said the issue price of the placement shares is assumed at RM2.70 apiece, which represents a discount of 9.77% to the five-day volume weighted average market price of AmBank shares up to March 30, of RM2.9922.

The group intends to use RM806 million for working capital purposes and another RM4 million to cover the expenses of the corporate exercise.

Assessment of goodwill for impairment

In  a separate announcement, AmBank said it is assessing the carrying value of goodwill relating to certain lines of business, taking into consideration the recent changes in circumstances over the past 12 months, as part of  the annual review exercise.

The outcome of this exercise is ongoing and will be subject to audit review. Arising from this  review, any goodwill impairment will be reflected in AmBank’s results for the fourth quarter ended March 31, 2021, the group said.

"A goodwill write-down is a non-cash item, which will have no impact to regulatory capital  ratios and does not affect future earnings, as it is a non-recurring item.

"This review will be more focused on the goodwill relating to conventional banking (RM1,495  million) and investment banking (RM428 million). Upon conclusion of this review, a  separate announcement will be released as soon as practicable," the group added.