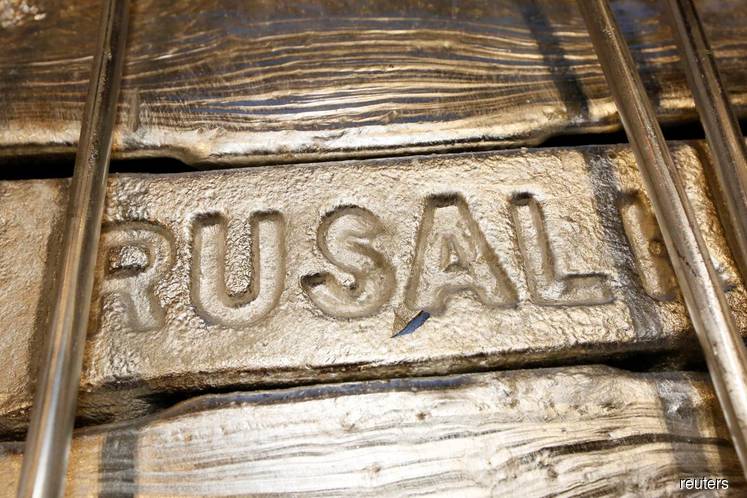 The sanctions had sent London aluminium to a seven-year high when they were announced in April last year amid fears of a supply squeeze.

Prices had since fallen back on expectations that the measures would be withdrawn but added 2.7 percent last week amid a surge in cancelled warrants, or orders to withdraw from London Metal Exchange (LME) warehouses.

There is likely to be little price support from top aluminium consumer China in the near term, with the country shutting down for the week-long Lunar New Year break early next month.

"This week end-user companies in eastern China have begun to suspend production for the holiday and demand has turned weaker," Jinrui Futures wrote in a note.

Anticipated restarts to alumina production, including at Norsk Hydro's Alunorte plant in Brazil, could keep pressure on prices, it added.

* LME: The London Metal Exchange has lifted its suspension on placing Rusal metal on warrant.

* RUSAL: Shares in Rusal, which said Jean-Pierre Thomas had resigned as chairman to comply with an imperative request from the U.S. Treasury, rose by more than 5 percent in Hong Kong.

* TRADE: Chinese Vice Premier Liu He will visit the United States on Thursday and Friday for the next round of trade negotiations with Washington.

* OTHER METALS: LME copper edged down 0.2 percent to $6,042 a tonne, while ShFE copper, tracking a jump in London copper on Friday, hit a one-week high of 47,950 yuan a tonne before closing at 47,540 yuan. Zinc was up 0.3 percent in London but all other LME metals were trading lower.

* Asian shares ticked up though they retreated from earlier highs as relief on news of a deal to reopen the U.S. government following a prolonged shutdown gave way to edginess before a key round of Sino-U.S. trade talks.