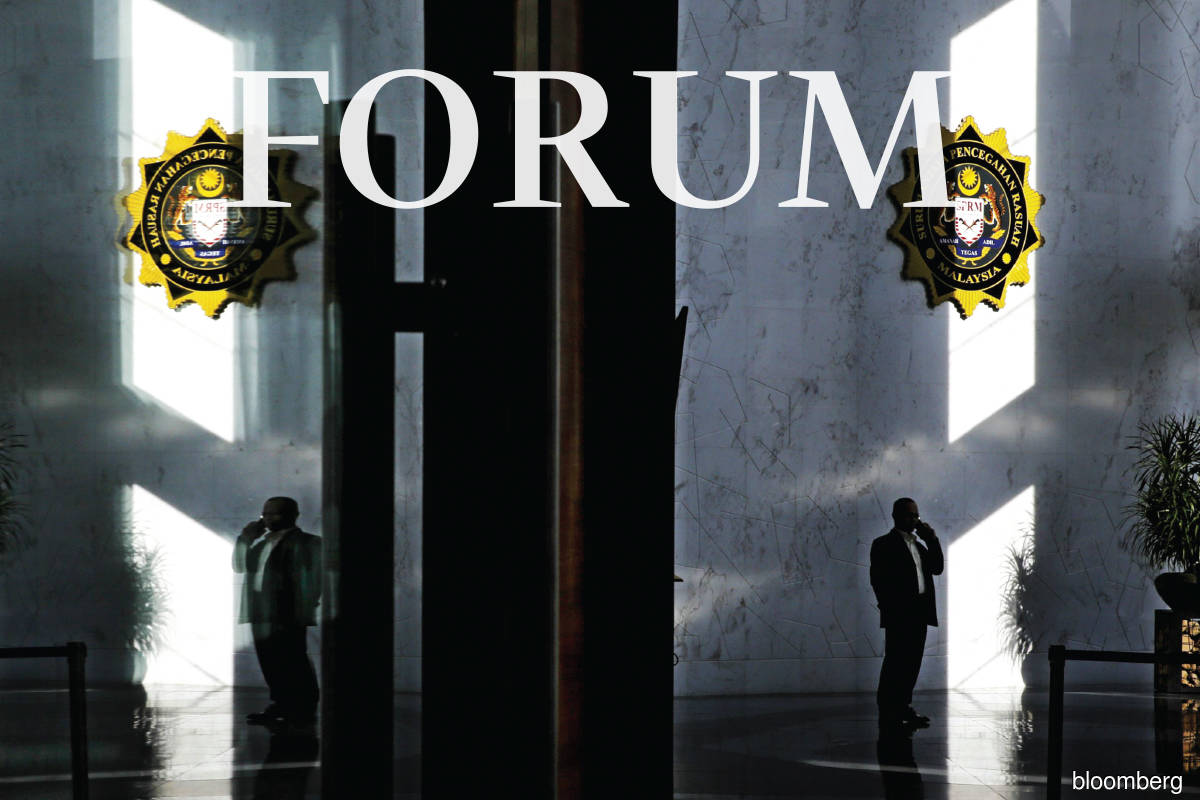 In Malaysia where 50% of the corruption cases involve the public sector, the Malaysian Anti-Corruption Commission (MACC) has to be whiter than white.

The commission shoulders the responsibility of weeding out corruption among public officers, including the police, when they discharge their duties. The sheer number of former ministers and political party leaders facing trial for alleged corruption, abuse of power to solicit bribes and money laundering is ample evidence that the scourge of corruption is rampant and starts at the very top of the administration.

But since October last year, the chief commissioner of MACC, Tan Sri Azam Baki, has himself been mired in allegations of wrongdoing.

To make matters worse, the manner in which the investigations into his shareholdings in listed companies has been conducted and dealt with by the Anti-Corruption Advisory Board (LPPR) has cast doubts on the transparency, integrity and effectiveness of the body.

Last October, reports surfaced of Azam owning 1.9 million shares in GETS Global Bhd as at end-April 2015 and that his shareholding was reduced to 1.03 million shares as at May 31 the following year. The same report also stated that he had 2.156 million Excel Force MSC Bhd warrants as at end-March 2016. The warrants can be converted into shares at an exercise price of 68 sen per share.

At that time, Azam was the head of investigations of MACC, which itself was going through a dramatic change following pressure on the commission to investigate the colossal fraud that had taken place at 1Malaysia Development Bhd (1MDB).

The federal government fund was under the watch of the then prime minister Datuk Seri Najib Razak, who has been convicted in one of the many cases he faces for alleged corruption and abuse of power. Najib is awaiting the outcome of his appeal to the Federal Court on the SRC International case.

Azam has said that his account was opened for his brother and that he had given his brother permission to buy and sell shares.

His admission that he allowed his brother to operate his share trading account has prompted an immediate response from the Securities Commission (SC), which stated that it would be seeking an explanation about the statements made to verify them and gather evidence.

Under the Securities Industry Act, when a person opens an account with a brokerage, he or she is deemed to be the beneficial owner of the shares. The account holder must not allow others to operate his or her account unless consent is obtained from the brokerage when the account was opened.

But rarely do stockbrokers allow individuals to appoint nominees to operate an account on their behalf because in the event of a dispute, the stockbrokers tend to end up being the losers.

For instance, when there are losses, the brokerage has to recover them from the beneficial owner and not the nominee who had placed the orders for the shares. In the event the losses are disputed, it would be contentious and the brokerage could lose when the case goes to the courts.

Moreover, the stockbroker also has to know the source of its clients’ funds to avoid being implicated in money laundering charges. Having a nominee operate the account may circumvent the “know your customer” rule that stockbrokers must adhere to.

For these reasons and a few others, brokers tend not to allow individuals to appoint a nominee to operate their account.

The practice is allowed when the beneficial owner is a company. The company would have to obtain all the necessary approvals, including a board resolution, for nominating a single person to place orders in relation to the account. The nominee buys and sells shares on behalf of the company and any losses are borne by the company.

So, when Azam opened the account with the brokerage, did he obtain approval from the broker for his brother to buy and sell shares on his behalf?

Such details were not disclosed by Tan Sri Abu Zahar Ujang, chairman of LPPR, when he addressed the issue of Azam’s ownership of shares last week.

Abu Zahar’s statement that Azam did no wrong and that the shares were bought by the chief commissioner’s brother has raised questions on the scope of the LPPR chairman’s duties and the board’s handling of the matter.

First, it is not Abu Zahar’s call to determine whether Azam had violated any laws or otherwise. That comes under the purview of the SC.

Second, Abu Zahar is seen as being late in publicly addressing the issue.

A former member of the MACC Consultation and Corruption Prevention Panel (MCCPP), Professor Dr Edmund Terence Gomez, contends that he brought the matter up three times from early November to mid-December without any response from Abu Zahar.

Gomez finally resigned from the MCCPP on Dec 27 after no action was taken to investigate the allegations about Azam. Instead of action being taken, he was accused of politicising the issue instead. Azam’s matter was also raised in parliament on Dec 14 but there was no response then either.

In addressing the delay in investigating the allegations, Abu Zahar said the LPPR had met on Nov 24 and had cleared Azam on the ownership of shares.

If the LPPR had already investigated the matter and made a decision on it, why was this not made public earlier?

Since Azam has contended that the shares were bought by his brother and not himself, the issue of funding for the shares and why the shares of these particular companies were purchased from among the 1,000-odd listed companies on Bursa Malaysia are questions that the chief commissioner may not be able to address.

However, it should be noted that GETS Global and Excel Force are not exactly the kind of stock one would describe as blue chip and invest in for long-term returns. GETS Global is in the challenging bus transport business, which explains why the company’s financials are not in the best of health.

Excel Force, meanwhile, provides services to players in the capital markets. While it used to have some prominent individuals as shareholders, the company does not command a strong following among institutional shareholders.

Azam’s shareholding in listed companies and the investigations by the LPPR show weaknesses in the rules on ownership of shares and the entities monitoring the work and wealth of officers in the MACC. It has led the MACC into a minefield of questions that need to be addressed.

First, public officers should not be penalised if they buy shares for investment purposes as everyone needs to set aside income for retirement and savings for a rainy day. However, they need to substantiate clearly how they made their choice of investment and the source of their funds in the event there are questions asked.

Second, the existing structure and entities that are in place to monitor the MACC are not effective. The MACC should be made answerable to parliament only and any allegations should be investigated by a committee of parliamentarians comprising representatives from both sides of the divide. It cannot be left to a committee made up of former politicians and civil servants.

This is not the first time the MACC has been mired in controversy. In recent times, there have been instances of the commission withdrawing cases against politicians when the case was almost over. Its officers have also been implicated over money seized that had gone missing.

The MACC cannot afford to be seen as weak and compromised. It is the beacon of hope in the fight against corruption, which has destroyed so much of the country’s wealth.