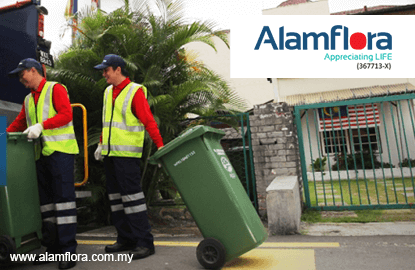 ALAM Flora Sdn Bhd, one of the largest private waste disposal management specialists in the country, is set to clinch a RM100 million contract under the waste segregation programme by Solid Waste Management & Public Cleansing Corp (SW Corp), according to sources.

Following the enforcement of the waste segregation programme, which came into effect on June 1, Alam Flora is expected to introduce and operate 100 to 150 segregated waste trucks in Kuala Lumpur.

It is learnt that these new high-tech waste trucks would have separate basic compartments to cater for different categories of waste, such as paper, plastic, other recyclables and general refuse.

Alam Flora is one of the leading environmental management companies in Malaysia and collects an average of 1.01 million tonnes of waste a year. It currently holds a concession agreement to provide solid waste management services in several states and also conducts non-concession businesses, such as managing landfills and cleansing activities for local government authorities.

It is worth noting that local conglomerate DRB-Hicom Bhd, in which tycoon Tan Sri Syed Mokhtar Albukhary has a 55.92% stake, is the controlling shareholder of Alam Flora with a 97.37% effective interest. The remaining 2.63% stake is held by the Pahang government, a quick check on the Companies Commission of Malaysia (SSM) website shows.

It is not known when the contract will be officially awarded to Alam Flora but it is believed that the waste management provider is in the midst of an active negotiation with SW Corp, a government agency under the purview of the Ministry of Urban Wellbeing, Housing and Local Government (KPKT).

Considering that Alam Flora is focused on the management of integrated solid waste, sources say the segregated waste trucks are likely to be delivered by one of the automotive arms of DRB-Hicom, which in turn could be a sister company of Alam Flora.

At press time, neither DRB-Hicom nor Alam Flora had responded to questions from The Edge.

Interestingly, Japanese brand Isuzu and German marque MAN are mainly used as Alam Flora’s waste collection vehicles but it is not publicly known whether these are imported or locally assembled.

It is worth noting, however, that Isuzu Hicom Malaysia Sdn Bhd, a 49%-owned unit of DRB-Hicom, manufactures Isuzu’s light duty trucks, heavy duty trucks and pickup trucks in the latter’s integrated assembly complex in Pekan, Pahang.

Also, Isuzu Malaysia Sdn Bhd, in which DRB-Hicom has a 48.42% effective interest, markets and distributes the Isuzu commercial vehicles, including the fully imported ones.

The introduction of segregated waste trucks is now imminent as most Malaysian households have to start separating their trash from this month onwards or face fines from SW Corp.

In fact, the waste segregation programme was supposed to have begun in September last year but was postponed to June 1.

But for the moment, they only have to separate their trash into residual (kitchen, food, contaminated materials and disposal diapers) and recyclable (paper and plastic) waste.

The waste segregation programme had to be enforced because space for landfills is running out, thanks to intense competition from other sectors, such as property, infrastructure development and agriculture.

About 30,000 tonnes of waste are produced by Malaysians every day with only a miniscule 5% recycled and repurposed. The rest ends up in the landfills around the country.

Coming back to Alam Flora, the company is close to firming up an agreement to privatise and take over solid waste management (SWM) and public cleansing services in Kelantan and Terengganu.

These agreements, when executed, will make Alam Flora the largest private SWM provider in the country, according to DRB-Hicom’s 2015 annual report.

Information gathered from the SSM website shows that the company generated a net profit of RM58.377 million in FY2015.

To recap, Alam Flora was incorporated in 1995 as a special purpose vehicle to undertake the privatisation of SWM services within the vested concession areas in Kuala Lumpur and Putrajaya as well as Selangor, Pahang, Kelantan and Terengganu.

In September 2011, the government granted the company a concession to conduct collection and public cleansing management services for 22 years in Kuala Lumpur, Putrajaya and Pahang.

Today, Alam Flora is also expanding its non-concession SWM business, namely the collection of solid waste in the commercial and industrial sectors as well as construction waste, integrated facilities management, public cleansing and the management of landfills.