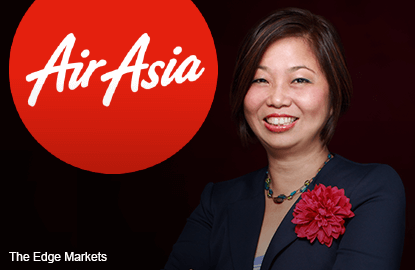 "Kathleen lives and breathes North Asia. She was the first to spot the massive potential of China when no budget airlines operated to it. She made sure we were the first low-cost carrier to fly to China and built a strong network of 14 hubs there," said group chief executive officer (CEO) Tan Sri Tony Fernandes.

He said North Asia is an important long-haul market that will take on greater significance after the group launches AirAsia Japan, which is expected to be in October.

In 2004, Tan left Warner Music to join AirAsia as regional head of commercial, where she was responsible for top line reporting and oversaw 15 departments.

In 2013, she was appointed CEO of AirAsia Expedia, a joint venture between AirAsia and Expedia Inc.

Tan stepped down as AirAsia Expedia CEO a year ago after AirAsia completed a disposal of a 25% stake for RM347 million in the online travel agency to Expedia.

As at 3:23pm, AirAsia was trading unchanged at RM2.65. It was among the 10 most actively traded counters, with 20.82 million shares done.